BIG WAVE GUNS are sacred objects to those who ride really big waves. They are the craft on which we test our skills at the highest level of consequence, so it’s imperative that they work well. Nothing is worse than a bad big wave gun. That’s like having a car with shitty brakes on a steep mountain road. It’s horrible and the odds are stacked against you from the beginning.

Fortunately, there are masters of the art of designing and making big wave guns. These guys have had all the feedback necessary to get designs honed to near perfection, so that riders can have full confidence in the equipment as they throw themselves over the ledge on 40- to 50-foot waves. 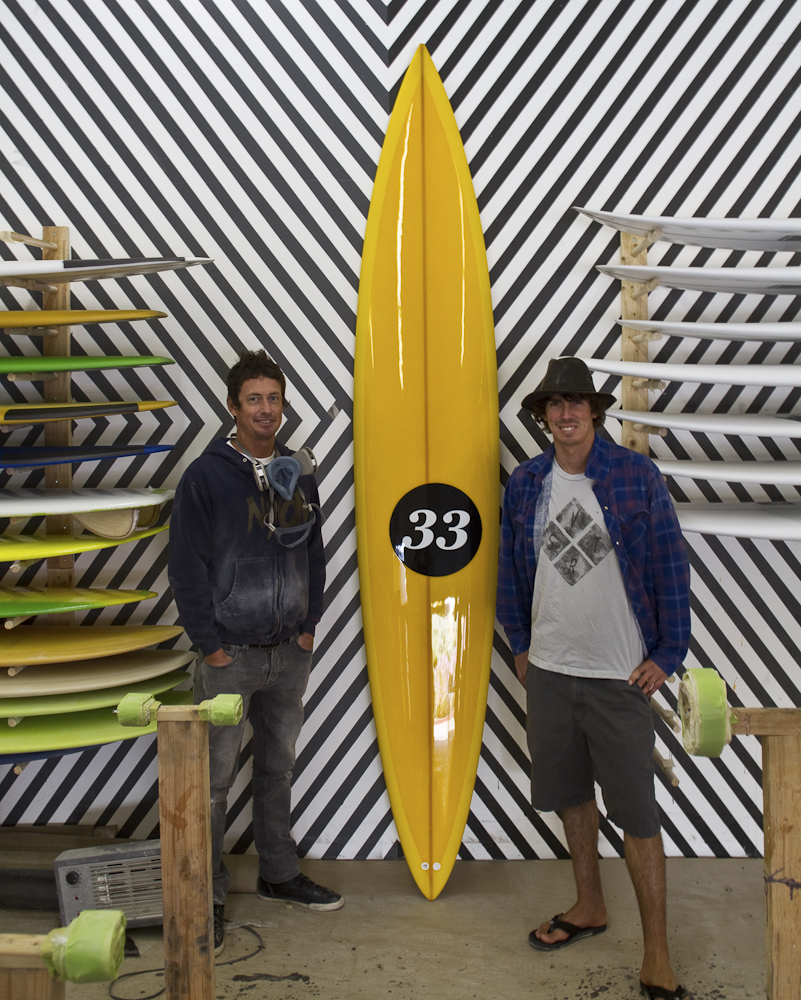 This is the three of us together at Chris's factory in Encinitas. Chris's finished product is always a thing of beauty. This year he numbered all his big boards with a chosen number of the owner. I went for 33. Something extra to mark the time frame.

This year I had two new boards made by two different shapers, both regarded as masters of the art. The outcome, as expected, was two beautiful boards. A 9’4″ by Timmy Patterson, and a 9’6″ by Chris Christenson. Both 3¼” thick. These things will both get into waves as big as can be paddled into along the California coast. For Hawaii, bigger boards are needed, but for California these are perfect.

I like to get connected with the boards from the beginning, get to know them in mellow ocean condition, feel how they paddle, how they glide, how they turn, and just build a relationship that puts me in total comfort when I find myself paddling into the lineup on a really big day. So here’s a tale of these two new boards and their maiden missions, and some insight into the guys that made them. 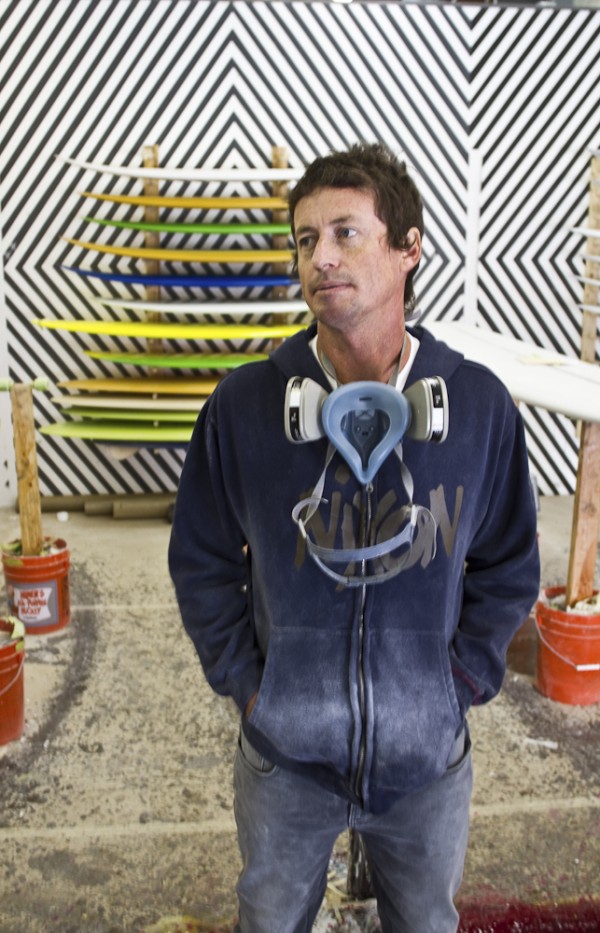 Chris has been in the shaping business for all his adult life and has lots of experience making any kind of board imaginable.

Chris Christenson is widely considered one of the masters of big wave boards in this era. He worked under the godfather of big wave design, Dick Brewer, for more than 5 years, so that heritage gives him something special. He’s a relatively young guy, got started early on, and has been making big guns for a long time now, at a quantity as high as anybody in California.

My brother Greg has been getting all his equipment from Chris for years now, and has ridden as many big waves as anybody in the world over the past decade. A slew of the most talented guys in the world like Mark Healey and Ian Walsh trust Chris for boards in their quivers too. 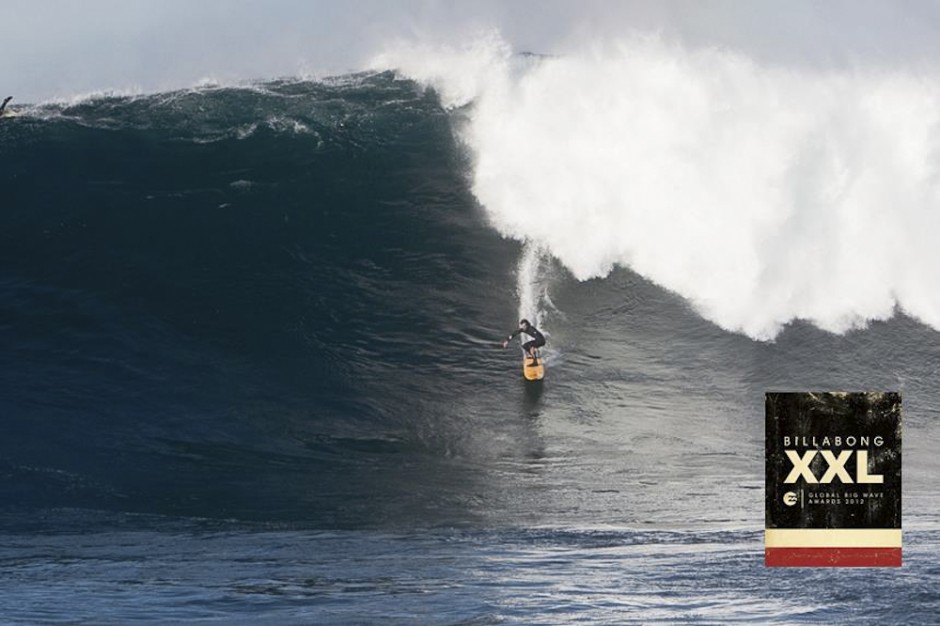 This was my first big wave on the board on a great day last month at Todos Santos. It was a super smooth, relatively easy one, which is a nice way to start the day. The waves were epic that whole day and the board worked amazingly.

He made me a 9’6″ board for the year. It is the design and template he has down, which is the go-to for most guys getting boards from him. That’s as big as I will get them for the West Coast; I’ve got really long arms, and am light, so my specs don’t require as much volume as many guys like. Part of having a big board to me is turning it into a beautiful object of art in all regards. These shapers put their hearts and brain into these boards, and they like for them to be individual objects of art too.

Yellow resin tint has been my choice for big boards over the years, especially on 9-6s, so that’s what we did on this one. I rode the board on a perfect day out at Todos Santos last month in 30- to 45-foot waves, and the thing works like a dream. It does everything right, from paddling well, to turning well, to handling steep drops with ease. I’ve got 100% confidence in it, and that factor plays a big role right when you touch the water. I hope it stays around for a while! 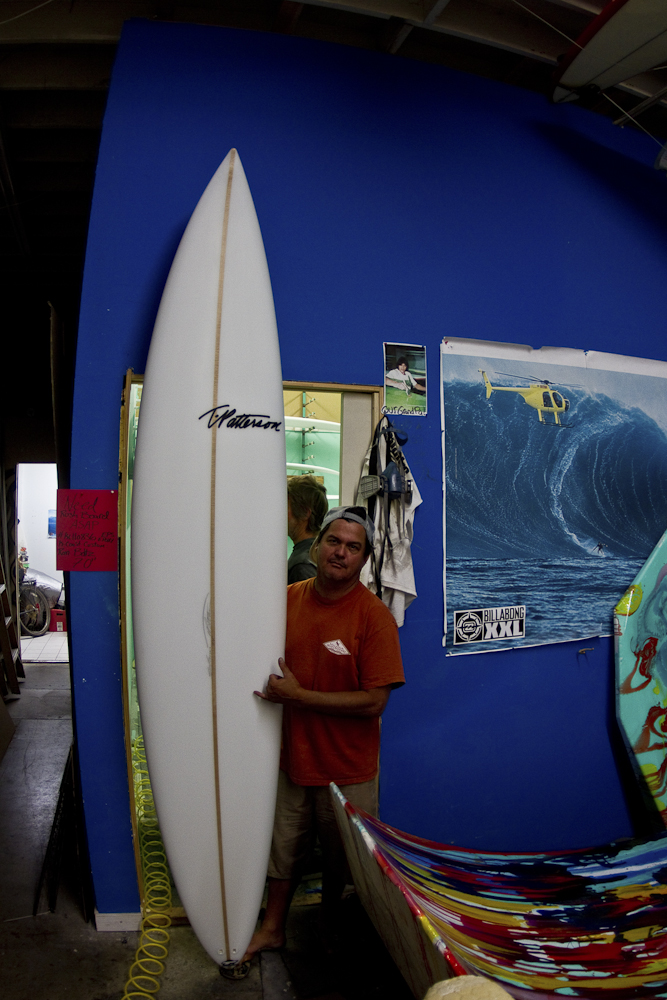 This is Timmy at his factory in San Clemente the day I picked up the 9'4. Timmy is a character, full of enthusiasm and innovative ideas. This board is similar to others I've gotten from him, with a couple slight adjustments to make it turn better.

Timmy Patterson made me the 9’4″ craft, which I did a free flowing paint job on — to give it that extra character I like my big boards to have and to start creating the bond. Timmy is a legend of the shaping world. He learned from his father, who was a well-respected shaper in the ’60s and ’70s, and Timmy has been making boards of the highest caliber since the ’80s. The list of people he’s made boards for has many of the best surfers in the world on it.

He shapes out of San Clemente, so I’ve had a long relationship with him, and have had many of my best all time boards from him. One of which was a 9’6″ from two winters ago. We went a little bit smaller, so lengthwise it is better for mid-sized big waves, but volume wise it can handle the big big stuff. 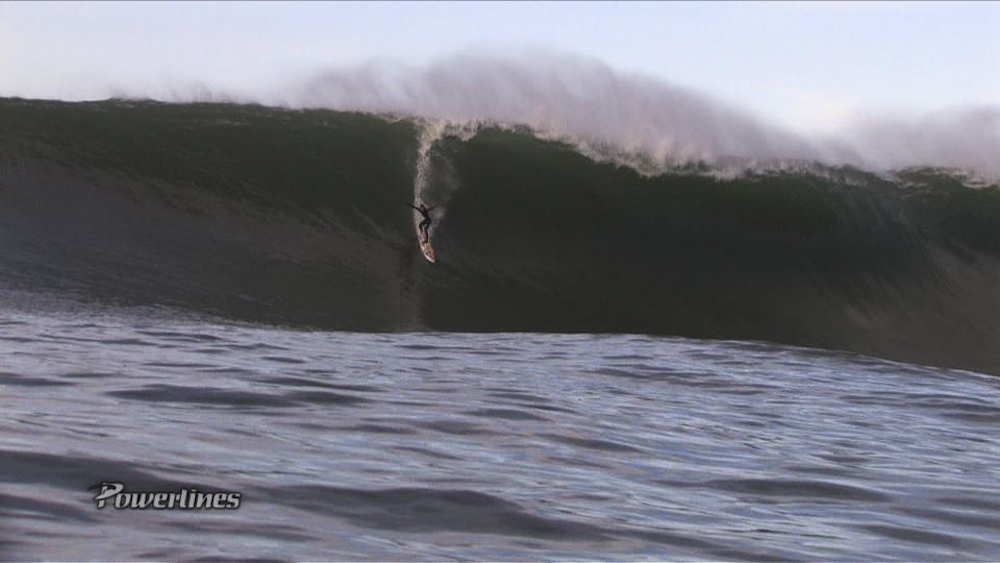 This was my first big wave on the Patterson, at Mavs. Unlike Todos, this was a very difficult first wave and I ate shit at the very bottom. Got it out of my system though and didn't break the board fortunately, because that wave packed some weight. I had a couple other nuggets later that day, and I gotta say, am very happy with my two new additions to the big wave quiver for this year.

I rode it at Mavericks last month on a clean mid-sized day. It was uber crowded, as Mavericks is these days, unless it is really big, or foggy and unappealing, so I only got a couple waves. One of which was a super heavy, ultra hollow one, that I ate shit at the bottom of, after freefalling down a vertical wall for 30-some feet. I got held down a really long time, had a high impact crash and thrashing so it was a very legit wipeout.

It wasn’t the board’s fault though; it was having to take off at a position not ideal because of the crowd and then facing a very technical situation. My first big wave of the winter too, so had to get the cobwebs cleaned out. I look forward to getting on it again. 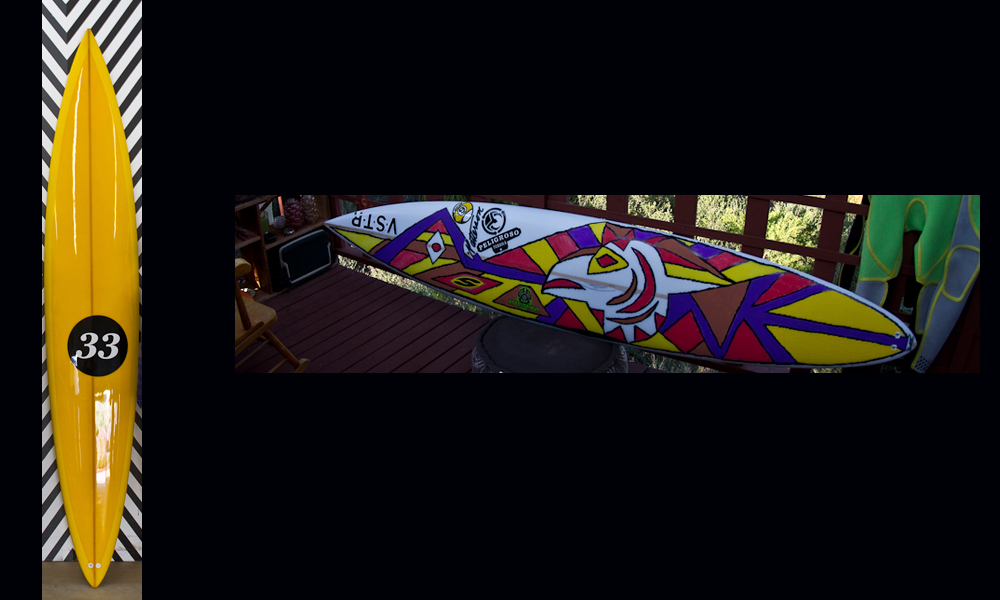 So these are my two go-to craft at the moment. Hopefully some more big days come soon, because this has been the most uneventful winter ever for California.