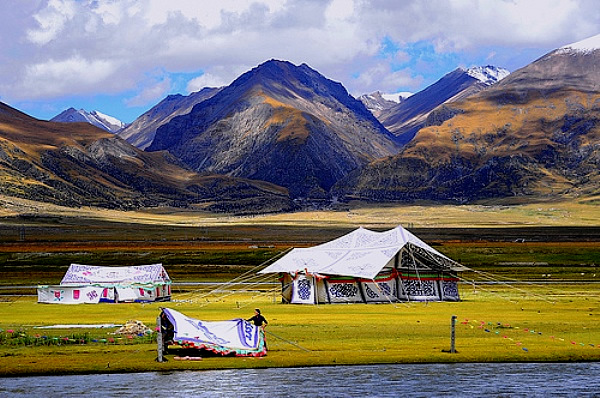 Feature Photo by Cessna 206. Photo Above by reurinkjan.

The only time I find the desire or need for travel damning is when I am without the means to do so but with the desire to do so. It’s in moments like these that I am forced to seek solace in others who have suffered before me and done the great service of recording, with pen and paper, their experiences.

A quintessential writer of travel per se who captures the romantic novelty of foreign places and Quixotic escapades of wandering in distant lands, W.H. Hudson personifies the alluring spirit of roaming abroad.

Although marginalized by some of his contemporaries during the late 1800s and early 1900s, Hudson was popular enough to have his book, The Purple Land, mentioned in Hemingway’s The Sun Also Rises.

The Purple Land is a tale of elopement – fleeing Buenos Aires and seeking a new life in the once tumultuous but now semi-docile Uruguay.

The book is without doubt my favorite oeuvre of Hudson’s even though it’s not very well known. Hudson himself has largely been neglected—a real pity as most people who read him savor the experience.

The one book of his that may be remembered is Green Mansions, a tale of an Englishman in Venezuela who falls in love with a woman from an endangered tribe of natives. I’ve always felt it was misclassified as ‘fantasy’. The terms ‘romantic’ or ‘transcendental’ would have better reflected the spirit of the late 1800s and Hudson himself.

Being a staunch realist however, there is only so much romantic writing I can enjoy without wanting to delve once more into harsh reality.

Perhaps H.W. Tilman might be considered more of an adventure writer than a travel writer, however his Shackleton-esque accounts of sailing and climbing would be impossible without travel.

A slightly eccentric Englishman, Tilman spent a fair amount of his life sailing around the world aboard his own ship, making landfall at unclimbed mountains, climbing to the summits, and filling in the lacunas of mid-20th century maps when at all possible before returning home.

The compendium, The Eight Sailing/Mountain-Exploration books, has a very self-explanatory title and is the perfect introduction to tales of adventure and misadventure in Patagonia, Greenland, and Antarctica.

Tilman knew and worked with Eric Shipton doing reconnaissance in the Himalaya. Shipton was well-known in the world of climbing and was the original candidate for the famous 1953 Everest Expedition in which Sir Edmund Hillary and Tenzig Norgay summitted the peak.

Not unlike Shipton and Tilman, Austrian climber-turned-writer Heinrich Harrer was no stranger to the Himalaya, other high peaks, and the precarious in general.

Although best known for his Seven Years in Tibet, Harrer was by no stretch of the imagination a ‘one-hit wonder’.

White Spider is a classic in the world of climbing dealing with the infamous Eiger’s north face.

For those not interested in climbing, he wrote Return to Tibet, his condemnation of Chinese-occupied Tibet stemming from a 1983 return to what he called ‘his second country’, and a photography collection entitled Lost Lhasa.

In addition to his climbing fame, Harrer explored the Amazon with the former king of Belgium, Leopold III. While adventurous and exciting, his works are more than thrill and peril, and Harrer himself would have surely been the first to admit the importance of culture and the conflict of juxtaposed culture.


Nigerian writer Chinua Achebe was another who knew that lesson well. His masterpiece Things Fall Apart is most certainly a required read for anyone traveling to a former European colony, especially in Africa, and definitely Nigeria.

Although a ferocious critic of Joseph Conrad—citing Conrad’s racism towards Africans—Achebe could also be included in that group of authors who dealt with the imperialism of Europe’s past. But from an astonishingly refreshing point of view, Achebe writes from the side of the subjugated.

Strictly speaking as an author, Achebe doesn’t fit the profile of a travel writer, but the lessons he teaches about cultures collocating and even competing is something paramount for anyone who travels abroad.

With the litany of tales, opinions, and books available, this small list of authors is just the tip of an iceberg.

That travelers are capable of maintaining their sanity while trying to choose the perfect location for the next sojourn is utterly amazing. Even more amazing is the fact that armchair travelers don’t become insane from jealously and envy.

Maybe the prospect of a forthcoming trip provides some meaning to normal life.