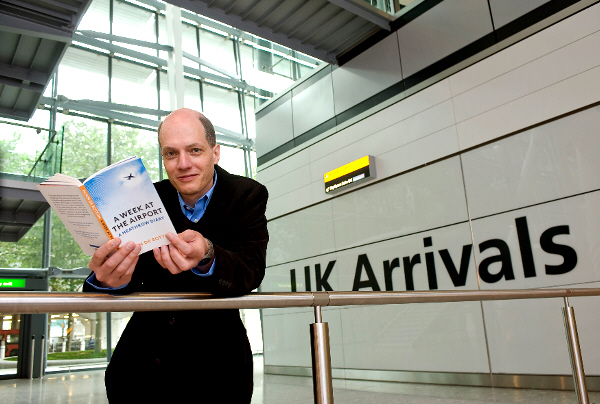 Feature photo: City of Sound. Photo above via Frank Bures.

Alain de Botton, author of The Art of Travel, the book that inspired me to write my MA thesis on travel and identity, was invited by to spend a week in Terminal 5 at London Heathrow as the “writer-in-residence.”

The result is A Week at the Airport.

He sets up camp with a desk and a computer near the departures desk, but he wanders throughout and takes us with him from the airport chapel to the factory where the airplane food is made and plated.

The slim volume, only 107 pages, is split into four sections: Approach, Departures, Airside, and Arrivals. Along with text, it includes photographs of places such as the hallway of the hotel where he stayed, of the Ghanaian family unpacking the plasma big-screen TV they would be taking home with them, and, a place I’d never seen before -> The First-Class Lounge.

He is a keen observer and researcher, capturing the mix of emotions that seem to be inherent in airports; those in-between spaces where people are brought together momentarily because of their desire or need to go somewhere else.

I love his description of a family heading out on vacation. He shows the collapse of the idealization that many people have when they travel, or at least for those who assume changing places will automatically change who they are. David, the father, had been planning the trip for a year:

As David lifted a suitcase on to the conveyor belt, he came to an unexpected and troubling realisation: that he was bringing himself with him on his holiday…

He had booked the trip in the expectation of being able to enjoy his children, his wife, the Mediterranean, some spanakopita and the Attic skies, but it was evident that he would be forced to apprehend all of these through the distorting filter of his own being.

He makes you look at an airport; places we often see just as a gateway to get to where we want to go, as a place of its own.

Read more of our recommended titles under Matador’s Focus on Travel Reading page.