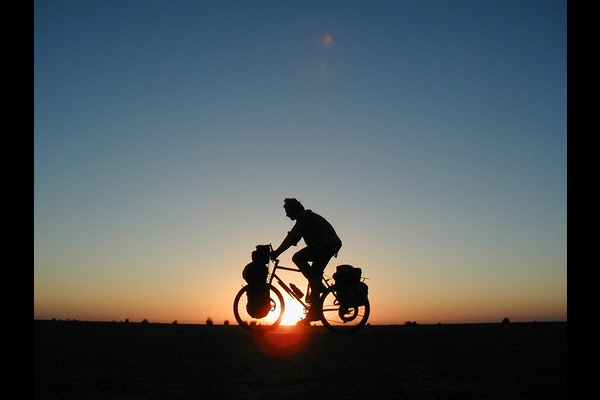 “Moods of Future Joys” and “Thunder and Sunshine” is a two part account by Alastair Humphreys of his 46,000 mile cycle ride around the world.

The first half of the journey, across Europe and down the length of Africa is covered in his first installment: Moods of Future Joys. Shortly after setting of from Yorkshire, England, the 9/11 attacks took place, which meant that Humphreys’ planned journey through the Middle East had to be abandoned, and Africa was tackled instead.

The book details Humphreys’ doubts over not only his route but his ability to complete such a task. Humphey’s has to deal with the constant pressures of life on the road, while attempting his journey on a meager budget.

Most local hotels were out of his financial reach and Humphreys slept rough, often in areas where his safety could not be guaranteed even during daylight. What would be considered an epic journey for many is simply a stage in Humphreys’ continuing quest to cross the world by bike. 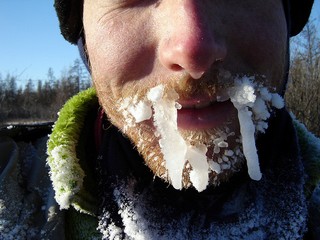 Thunder and Sunshine picks up from Cape Town, where Humphreys’ boards a boat to take him to South America, where he will continue his voyage.

Riding through the wilds of Patagonia he continues up the west cost of South America, catching a ride on a boat to Mexico, before riding up to the United States, Canada and through to Northern Alaska.

Sailing to Russia, he braves the Siberian winter before riding across China, the ‘stans, which bring him back to Europe and then finally home.

The descriptions in Future Joys are often brief and it’s clear that Humphreys’ writing abilities improve as he continues his journey. Half the pages in Thunder and Sunshire had me thinking “I should really do that?” the other half had me cringing in empathy while wondering “Why would anyone do that?“.

His voyage wasn’t without its hardships, most notably his camping in Siberia in temperatures around -40 C, and an ever pressing knowledge that there was still thousands of miles to go, most of which were covered on less than ideal equipment. 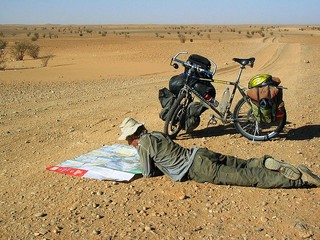 During his travels, Humpheys cycled through roughly 60 countries and his writing is based on his observations of the world, the people he met and the hospitality (or lack of) he received.

Traveling on a minimal budget, mostly from money saved on student loans, Humpreys had no support and virtually no money, surviving almost exclusively on bland pasta and sleeping rough.

He frequently reflects on the divide between rich and poor and his feelings on international aid, the war on terror and global relations are thought-provoking.

Humphreys does not seem to be an adventurer with something to prove. He wasn’t attempting to break any records, nor does he seem to be someone with intense inner determination, yet he must to be to complete such a voyage. Such sentiments rarely come across in the book however. His journey is disappointingly without agenda, which makes reading his tale all the more inspiring.

He repeatedly talks about his voyage as something he felt like doing “to escape the routine” of his daily life, yet he entered into a life of intense routine: 100 mile days, preparing breakfast, lunch, and dinner over a small cooking stove, then camping in any quiet spot he could find before he did the same again day after day.

Both books frequently deal with loneliness that is the inevitable result of his solo journey. Humphreys is often frustrated by his inability to develop lasting friendships on the road as he moves on each day and he has little contact with his family at home.

The books often offer a very intimate glimpse into Humphreys’ life, like reading someone’s personal journal. Being able to relate to him, knowing he is essentially “the same” as anyone else (a distinction that is sometimes lacking in adventure travel books) makes his account all the more impressive.

Both books can be bought for roughly $16 each from Humphreys’ official website.