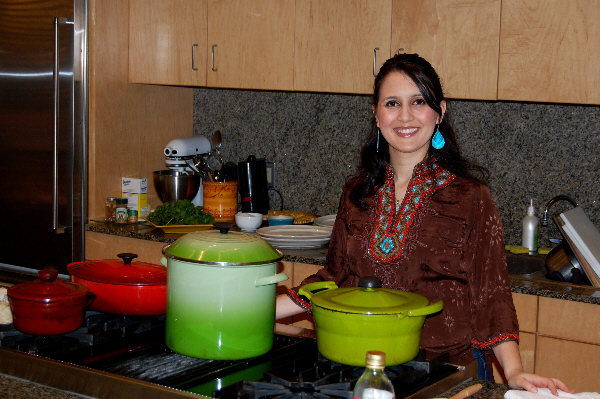 I have to admit, I was a fan of Alia Al-Kasimi’s Moroccan recipes long before she came out with the cookbook/DVD combo Moroccan Cooking: The Easy Way.

I found out about Alia’s YouTube channel while I was living in Pakistan. It was halfway through the Muslim month of Ramadan, and I had become tired of eating fried pakoras, dates and sweet, milky vermicelli noodle pudding for the daily breaking of the fast meal at sundown. I wanted the thick, tangy Moroccan soup – called harira in Moroccan Arabic – that is eaten in Morocco for the occasion.

From the year I spent studying abroad in Morocco, I still have vivid memories of sitting in tiny cafes staring at a steaming bowl of harira soup, thick Moroccan bread and hard boiled eggs while waiting for the call to prayer and the subsequent go-ahead to take that first spoonful of slow-simmered lentils and chickpeas in tomato broth.

Sitting at my desk several years later in Pakistan, I started craving harira as if I was back in one of those cafes waiting for the sun to go down. I decided I had to learn how to make it, and a quick Google search led me to Cooking With Alia. My first go at making the soup was a success, thanks to Alia’s step-by-step instructional videos, and since then, I’ve tried several of her recipes.

In 2010, Alia published her first cookbook, a thin, 63-page volume that comes along with a DVD for all the recipes featured. I was psyched to see her recipes collected in print and immediately contacted her for a review copy. 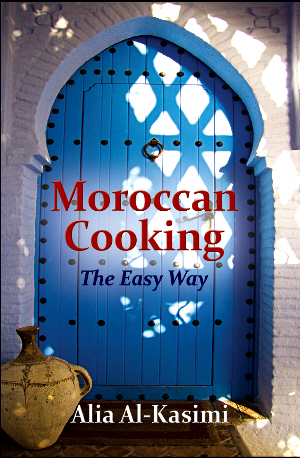 The book is lightweight and small, 5.5” by 8.5”, and is designed for practical kitchen use, not coffee table decor.

It starts with a short section describing essential Moroccan ingredients, and the remainder of the book features appetizers and soups, tajine dishes, other entrees, drinks and desserts.

Most of the 26 recipes feature a photo, although the photos are not high-quality, drool-inducing images like you’ll find in more expensive hard cover cookbooks.

If you haven’t eaten Moroccan food before, some of the dishes may not seem appetizing based on the photos, but the images are detailed enough to give you an idea of what the final product should look like.

Each recipe includes a short introduction describing the background of the dish, an ingredient list, preparation instructions, serving suggestions and a note about possible variations and substitutions.

Directions are easy to follow, and you can pop in the included DVD or go to Alia’s website to see step-by-step videos.

For simple recipes, such as Moroccan Carrot Orange Salad or Preserved Lemons, you probably won’t want to watch the videos, but for more complex recipes like Zaalouk (eggplant tartar) or Moroccan Chicken Bastilla (a savory, layered pastry dish), the videos would be essential for first-time attempts.

Alia herself hosts the videos, and she speaks slowly and clearly when describing cooking instructions and techniques. She has a pleasant voice and demeanor, and it’s clear that she loves what she’s cooking and genuinely enjoys sharing traditional Moroccan dishes with others. 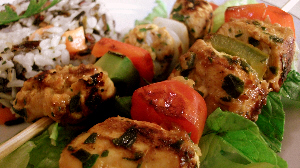 I would definitely buy this cookbook for myself or for friends who enjoy cooking different ethnic cuisines. It’s available for sale on Amazon (DVD included).

I bought several French and Arabic cookbooks from Morocco that I’ve lugged back and forth between the U.S. and South Asia, and I’ve never actually used any of them because either the book layout was unappealing, the directions were confusing, photos weren’t included, or I had to spend so much time looking up terms in the dictionary that I eventually gave up.

Moroccan Cooking The Easy Way (with DVD) is easy to read and follow while cooking, gives clear and concise directions and has the added bonus of complimentary videos for each recipe. 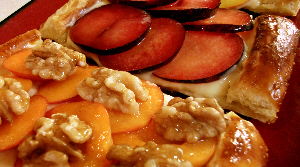 It’s also lightweight and thin, so you can easily pack it in your bag or purse for a short trip or for a cooking get-together at a friend’s house.

Since it’s a soft cover book, you’ll need to put something heavy on it to hold the pages open while cooking, but the size and weight of the book is one of the things I like most about it.

Many of the cookbooks I enjoy using are heavy coffee table books that I just can’t justify bringing with me when I pack up to move abroad. For my next international move, I’ll definitely bring Alia’s cookbook and DVD along.

Who is This Cookbook for?

I recommend Alia’s cookbook for anyone who enjoys cooking and culinary travel. Buy this book and DVD as a gift for someone who likes Moroccan food or is into experimenting in the kitchen; don’t buy it for someone who only likes to look at pretty pictures of food because it will just end up shelved.

Overall, Moroccan food is a healthy cuisine (as long as you don’t eat bastilla every day!), and it doesn’t utilize hot spices like chilies so most people can enjoy it without major modifications to the recipes.

If you do buy the book, I propose you try the harira soup followed by an entree of Alia’s Chicken Tajine with Carrots and Olives. Pair the meal with mint tea or a cold glass of almond juice, and your menu will resemble that of a typical Moroccan cafe.

Check out more cookbooks in Essential Cookbooks for the Culinary Traveler and The Adventure Cookbook.

Tagged
Books Morocco
What did you think of this story?
Meh
Good
Awesome