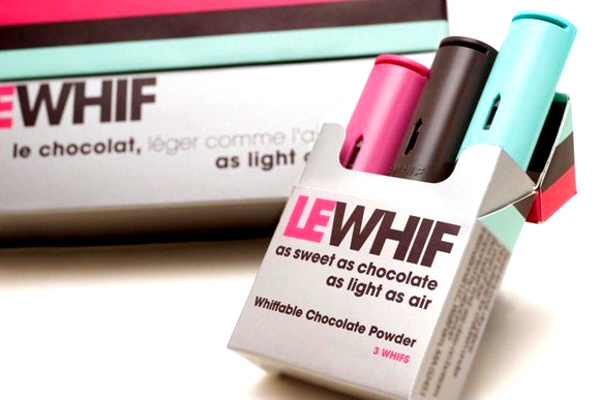 If only it were that easy…

The Daily Mail reports that the latest in bulge-battling technology has been developed by a Harvard biomedical engineer. Professor David Edwards has invented a chocolate spray that you inhale to help curb your chocolate craving.

According to Edwards, “..when you breathe the chocolate into your mouth, it dissolves immediately and coats the tongue and taste buds.”

His invention called “Le Whif,” (an ingenious name I might add) comes in a lipstick-size tube which contains only 8-10 puffs of chocolate scent depending on how much you puff.

More from the Daily Mail:

Critics question whether the experience of biting into a bar of chocolate can really be replaced by a pocket-sized aerosol.

They also point out that the smell of food usually heightens appetite, rather than suppressing it.

Louise Thomas, a chocolate consultant who runs tasting events, said that ‘whiffing’ would not confer the many health benefits associated with eating dark chocolate.

Word on the street is that Edwards has also developed a coffee Le Whif version and according to Daily Mail, “…is working with Michelin-starred French chef Thierry Marx to create new varieties, including aerosol spices, cheeses and liqueurs.”

At $2.50 a pop to “smell” chocolate, I might as well just skip a meal and buy a 99 cent king size Twix candy bar from a gas station.

Have you tried sniffing a food item instead of consuming it to curb a craving? Did it work?