[Editor’s Note: Norbert Figueroa is the third writer-in-residence to participate in the Road Warrior program, a partnership between MatadorU and the Belize Tourism Board. Norbert is spending the fall exploring Belize’s architecture and Mayan culture in anticipation of Maya 2012. Each week, he reports on his experiences for Matador, his personal blog, and for other outlets.]

The Cayes, located in Belize’s barrier reef, contain some of the most beautiful, unique, and well-preserved underwater formations you’ll find in the Western Hemisphere.

As the new Road Warrior, I have been snorkeling and diving throughout many of the best spots in the barrier reef, so I got really excited when I received a review copy of the JVC Picsio GC-WP10 Waterproof HD Camera as it gave me the opportunity to capture the beauty and life of this underwater world. 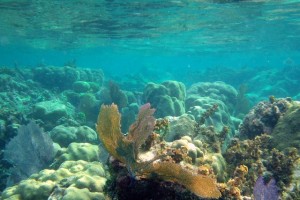 In my opinion, the Picsio does work well underwater but it has its limitations. In many occasions, I was unable to use the camera underwater as most of my time at the Cayes was spent diving and the camera has a depth limit of 10 feet / 3 meters. But, when snorkeling, the camera did work well and took decent pictures.

I even took the risk of snorkeling down to 15 feet underwater with the camera, and it still performed well.

Working with the camera underwater requires that you get familiarized with it first, since it’s a touch screen and most of its features are accessed through this interface – the shutter, zoom, settings, mode change, and picture effects, among others. The screen is fast responding and the display items are easy to touch, something I find to be very useful when handling the camera underwater. 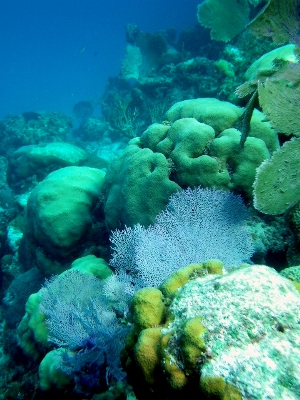 There are a few things that I do like about this camera, like the auto brightness dimming of the 3” screen. This is a great plus when you are taking underwater pictures at a shallow depth as light reflected on the water surface can prevent you from seeing what’s displayed on the screen, so the screen auto brightness compensates for this.

Another feature I like is how easy it is to change from picture mode to video mode while snorkeling and how good the video quality is (HDMI, YouTube ready).

But keep in mind that making sudden movements while recording videos will result in “blurred” videos since there is no image stabilization.

A pretty cool hidden feature of this camera is its audio recorder, which I found to be handy in a few interviews with Belizeans.

On the other hand, there are a few downsides. First, I was disappointed to see that it doesn’t have an underwater filter option to compensate for the intense blue color of the water (like many others do). Because of this, most images will look blue-ish and will lack color unless you get very close to the coral or fish you’re trying to capture. 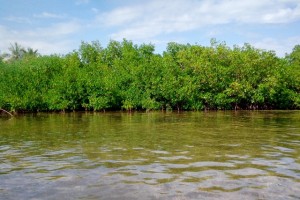 Another problem I encountered was the absence of flash. Not only does built-in flash help intensify the colors underwater, but it is useful above the water too, especially for low-light pictures. This specific detail reduces the practicality of the camera, as the chances of taking good pictures are mostly limited to bright sunny days.

Overall, I think the Picsio is a camera that could mostly be used for leisure activities like going to the beach, river, pool, and snorkeling; but if you’re into taking serious, good quality underwater pictures, you will not be satisfied with this camera.

For now, I’m just going to have fun with it during my snorkel and kayak trips. For my dives…well, I’ll just enjoy the view firsthand.

You Can Take an Easy Day Trip To the Bahamas on This Florida Ferry
Patagonia Baggies Review: I Finally Tried the Cult-Favorite Shorts, and I Get the Hype.
This Small Texas Town Has One of the Best Fourth of July Fireworks Shows in the Country
How To Make the Most of a Trip To the ‘Gem of the Catskills’
This Airbnb in North Carolina Has a 75-Foot Water Slide Into a Lake