I KNELT, peering through a cellophane veil, studying what I thought was a good-sized moss-colored log until it turned into the biggest largemouth I’ve ever seen and swam off.

I may or may not have squealed.

I needed my fly rod. Instead of racing to the cabin like a kid to a recess water fountain, I managed to only kind of speed-walk like I had to get to the bathroom.

Most every puddle and drip of water has a fish of folk legend. In Leakey, Texas, that monster is ‘Big John.’ And generations of Leakey boys have exhausted themselves trying to fool him. The fish gods will surely be smiling on the angler who finally does. That 68 degree water has perfect clarity, bait-o-plenty, and enough hiding spots for a thousand years of hide and seek. The bass are healthy, spry, and watching you like roaming librarians. 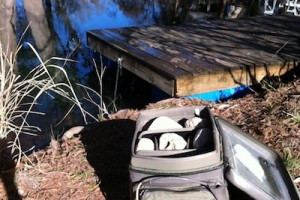 Back at the cabin, I organized my complimentary Sage Typhoon DXL Boat Bag. My wallet was sealed in the clear waterproof pouch inside the main compartment’s lid. Tippet went into the zippered mesh pocket on the front. The game and fish regulations went in the top pouch. Two molded patches were in the side pocket for my work station.

At 21″x 12″x 13″, I had plenty of space for fly boxes, reels, a camera, a snack, other gear, and extras. And the moveable dividers in the main compartment helped arrange the space. The lid dropped right into place and with a zip, we were waterproof and ready to go.

In the boat, I unzipped the Sage and tucked the flap to secure it closed, so I could get in the bag quickly without sacrificing water resistance. I put the two molded patches on top of the Sage to make a workstation. I laid out my instruments: pliers, hemostats, and a pocket knife on one side; a grasshopper, a popper, and a wooly bugger on the other.

I spent the next few hours watching catfish and bass swim in and out of hiding. The Sage and I worked steadily through about 31 flavors of flies, hoping I had Big John’s version of butter pecan. As always, mistakes were made. A few flies earned their freedom. We picked up a couple small bass late in the day. Squirrel nails flayed cypress bark in a ruckus; red-headed wood peckers beat out drum fills. Anticipation swelled each time the fly lit and angled in to the cypress tangles to do its work.

Then, there he was. I laid the wooly bugger out in the drift ahead of Big John and held my breath. He turned, moving slowly but intently toward it. Sounds disappeared. A second bass, maybe 5 pounds, joined the investigation.

Big John circled. It was going to happen. 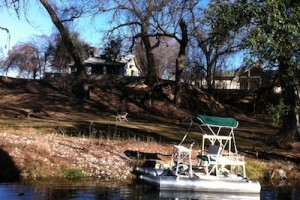 I was running out of water to work the fly. We were way too close. But the drab the Sage and I wore camouflaged us. Big John reached striking distance. A moss blur swept across my lure. Fish on! Sort of. Half-pound at best. Big John lingered while I released the insurgent.

The Sage and I made another quick change. I laid a new fly out in front of Big John. As he swam off, I’m pretty sure he turned and fish-said something like “Angler, please.”

We were done for the day. The Sage was packed in a breath and we were ashore in two.

Lights shined from the houses on the ridge there. A herd of whitetail does raced down the far bank. Voices from porches filled the hollow on the spring. I walked back for a venison sausage supper, looking forward to the next dance with Big John.

I was happy I’d found a good fishing partner in the Sage. We’d worked well together. There were a couple surprises—lost flies and quick changes—but no emergencies. Without breaking focus, the right gear was in my hand, the task complete, the workspace clear, the gear again stored, the flap secured, and my fly on to the next challenge. 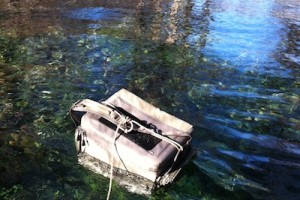 The next day, I put toilet paper into each compartment, zipped it tight, and three times threw the Sage into the too-chilly-for-me-to-swim swim hole.

The bag landed without rolling. The external mesh pockets got wet, of course, but inside, everything was bone dry — thanks to the welded construction and heavy water resistant zippers.

The bag landed a little heavier and a lot closer. The bag rode deeper in the water, but did not sink. Again, the toilet paper inside was dry.

All 1953 cubic inches were filled with stone. I zipped the Sage. The handles held up. I rolled it into the spring. The bag righted itself, paused, and sunk in a stream of bubbles. I hauled the bag up by a cord and heaved it ashore. The bag flooded, of course. But, the toilet paper in the clear waterproof pouch was dry.

Now, this was not a fair test. It doesn’t meet the recommended use and probably nullifies all but the sales receipt. Not much short of Mel Fisher’s Atocha gold would have been heavier in that space, but the bag really held up. I’m confident fishing this bag anywhere.

A boat bag is the bigger, outdoorsier version of your briefcase. It protects, organizes, and presents your gear at just the right time, so you can perform. If you were a surgeon, the Sage DXL Typhoon Boat Bag would be your scrub nurse.