View all travel news
Top Destinations
Top CitiesView All Destinations
Trending Regions
Trending Cities
Load More
“Solitude,” “peace and quiet,” “the calming forces of nature” — these are pretty common excuses anglers use to get out on the water and away from people.

OUR HALF-TRUTHS HAVE BACKFIRED.

We’ve made ourselves look like a bunch of piscatorial peaceniks. Worse yet, we’ve misrepresented the sport. Yes, fishing can be peaceful…on a creek. In six-to-eight foot seas, no way. But no matter where you are, catching is exciting.

I’d just received a complementary Clearwater shirt from Redington when a friend and I made a trip to Baffin Bay. We’d grown up together fishing Mississippi’s tea-colored creeks, reservoirs, and cow ponds and decided to do something we’d only read about: a sight-casting-with-a-fly-rod-for-red-fish-while-being-push-poled-over-grass-flats trip. (That’s mouthful enough to challenge any Waffle House or Starbucks employee.)

Captain Sally Black told us what to watch for and what to do. She put us on the fish. The rest was up to us. The sun came up fast and the wind came hard and steady. We drifted inches above wind-blown grass flats at 9-mile Hole. There, past King Ranch shore and beyond the Land Cut, the sky is big as any Montana has ever seen.

The raised casting platform on the poling skiff’s bow was stadium seating for the big show. Speckled trout tagged along with rays, finding meals in winged-fish’s wake. Ladyfish zipped through ready to pounce. Schools of red fish pushed swells. All manner of fish bullied across the shin-shallow flats.

I felt a little like that guy in the cart at the driving range who everyone tries to hit with golf balls. Blurs zipped past from this direction and that. By the time we saw the fish, they were on us. We had seconds to spot, identify, and select the fish, then gage their speed and direction, and – through a 15-knot wind — make a leading cast well enough to entice a strike on a googly-eyed feather and string creature imitation. 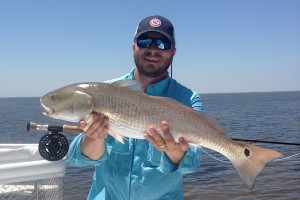 For a while, we sounded like a Homer Simpson sound bite on loop, “Doh!”, missed that one; “Doh!”, cast behind him. We took turns beating fish on top of their heads with our flies for a while. Then things started happening and we were in the game.

We hooked into the biggest speckled trout I’d ever seen, some grin-winning red fish, and a few “poor man’s tarpon,” the flying and flailing lady fish. We also hooked my Clearwater shirt.

Sight-casting is for real. It’s not relaxing or tranquil. There’s little time to think about life. It’s an eight-hour test of focus, attitude, skill, and luck. It ranks right up there with fishing with a machete. It’s a blast.

Out on Baffin Bay, we had to cut that hook out of my shirt. I’ve been watching the hole for a couple months now. The hole isn’t miraculously healing, but it’s not growing either – the Clearwater is a good fishing shirt.