03:28 Jul 29, 2021
View all travel news
Top Regions
Top CitiesView All Destinations
Trending Regions
Trending Cities
Load More
Gear selection is always about function, often about comfort, and sometimes about style. Every once in a while it can be about something much bigger.

FOR GENERATIONS, felt-soled waders have been as much of the fly angling tradition as the vest, broad-brimmed hat, and wood-handled net. That’s changing. Anglers now have to measure tradition against the health of our waters and, ultimately, the future of our sport.

Didymosphenia geminate, Didymo, or “Rock Snot” is an invasive algae found in cold flowing waters. It’s making its way across US trout streams. An algae infestation will cover a stream bed in a thick, mucous-like layer of yellow-brown slime.

Didymo is relatively new to North America, so scientists aren’t sure just what the long-term ecological effects will be. However, they have observed severe changes in infested streams. Thick infestations can make fishing difficult, and they may disrupt the food chain and damage the stream ecology.

So where do anglers fit in? Didymo, trout, and fly anglers all enjoy the same cold water. And the best research says fly anglers are spreading the algae from trout stream to trout stream as they fish their way around the world.

Felt-soled waders are at the heart of the matter. Felt, scientists say, is a near-perfect medium to gather Didymo from one stream, transport it with moist life support, and deposit it in an unaffected stream. This has led several states, such as Maryland, Vermont, Alaska, Oregon, Nevada, and others to ban the use of felt soles. 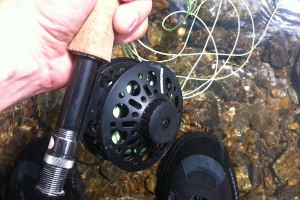 Redington and other wading boot manufacturers have been designing a sole that would prevent the spread of Didymo without sacrificing the performance of felt boots, which have long kept fly anglers safe while crossing slippery rocks in rushing waters.

Several months ago I received a complementary pair of Redington’s Skagit wading boots with sticky rubber soles. Embedded in the rubber soles are walnut shells. They’re meant to bite through slick algae and into the surface of the rocks. I’ve now used the boots in Maryland trout streams and Texas lakes and creeks and they performed well.

No one I’ve talked to can tell me why walnuts are better than say, Brazil nuts, but I’ve enjoyed fishing with the Skagit boot. The boots are easy to get on and off. They’re comfortable and tough. The mesh panels allow the boot to drain quickly and the lacing system gives some good ankle support.

And the Skagit is a good-looking boot. I wore them to the grocery store the other night and got no more strange looks than normal.

Environmentally-conscious anglers who are looking for value in a highly functional boot will find the Redington Skagit Wading Boot with sticky rubber well worth a look at $99.95.

If you’re an angler, or would like to be, please be an ambassador for our sport and an active steward to our natural resources.

I traveled to South Africa during Omicron. This is what it was like.
10 of the most iconic regional sandwiches to try across the United States
Airbnb wants to set you up rent-free in a designer house in Sicily for one year
The 11 most stunning indoor hotel pools around the world
Every type of Japanese sex club and what you’ll find inside
✖
travelstoke
Download the mobile app
stoked by