AND FROM THOSE TWO we see two divisions: carbonated, and non-carbonated.

So when I came across two water bottles that are perfectly suited for either of those categories, I realized that it was time to ditch the collection of Nalgenes and sippy-cups that I’d amassed over the years. (For anyone confused, coffee and other hot liquids are a category of matter all their own.)

For all those times when you’re finishing a marathon and the champagne in your Dasani bottle has fallen flat, the Stanley Nineteen13 Carbonated Beverage bottle is here to save the day. This is like the tallboy of the backpacking water bottle circuit, fitting its big, weighty body comfortably into your hand thanks to a cozy insulated jacket and a snug strap on the side.

Stanley claims that it will keep beverages cold and fizzy for up to 3 hours. I tested it out with a bottle of home brew, but because of said home brew, I forgot about the testing process and left it out overnight. When I returned in the morning–almost 12 hours later–I heard and felt the comforting sound of carbonation releasing from within, and somehow the beer was still fresh as ever, if slightly less cold. Pretty impressive. I’ve yet to take it camping or hiking, but something tells me it would go for a high barter price on the Appalachian Trail.

As for the One-Handed water bottle–well, perhaps like yourself, I was a little confused at what was meant by “one-handed” as the only time I’ve ever drunk anything with two hands was well before I reached the age of reason and the time I drank (read: spilled all over myself) a glass boot of Hofbrau (idea: boot-shaped water bottle). 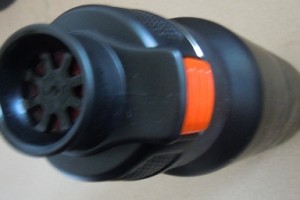 A close-up of the one-handed mechanism. Step 1: Push the red button. Step 2: Guzzle.

But really, it makes a lot of sense. Say you’re climbing, parachuting, taking a picture while evading riot gear-clad policeman. You’re thirsty, but no way can you use both hands to screw off the top of your big plastic BPA-free behemoth. Well, if you had the Stanley One-Handed, you’d simply push the little red button, put your parched lips inside the sealed-off spout, and cool off faster than a marathon runner splashing himself with Gatorade mid-stride.

And while this is all great and grand, maybe the coolest thing about these bottles is that they’re made by the same company that produced the massive green thermos that my dad and probably everyone else’s dad used in the ’80s and ’90s to drink coffee while out in a deer stand in southern Illinois. It’s still going strong. 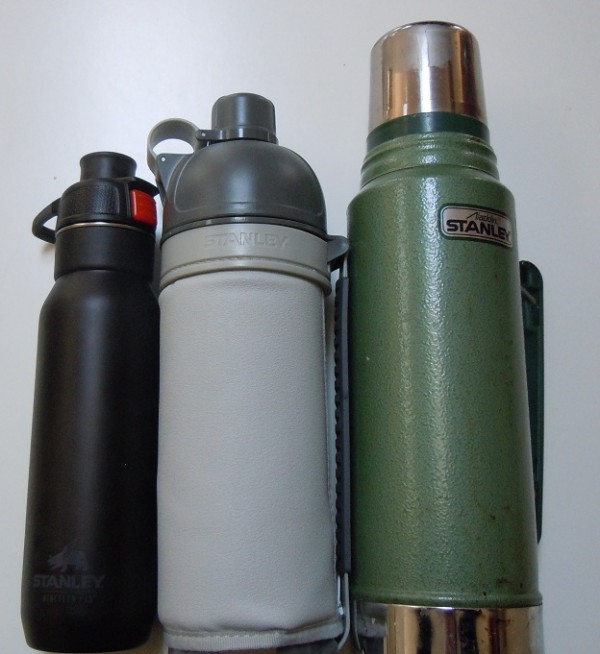 The two modern children of the old green granddad on the far right.