All photos courtesy of Peggy Llewellyn 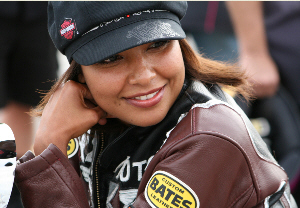 It is very difficult for me to pack light. But, if need be, this bag is perfect; it serves dual purposes.

For business, I can carry my laptop.

For pleasure, I can fit a nice pair of stilettos and a little black dress!

What can I say, the bag is fun, functional and colorful.

Everyone raves about a Mac Book, but I LOVE my Dell Inspirion 1545 :-). I have everything regarding 2 Wheel Woman Racing team on this laptop. I never know when I might need to email a proposal to a potential marketing partner.

As a compliment to my Dell Inspirion 1545, I have my Blackberry 8900. I have no desire to switch to an iPhone, but will upgrade to the Blackberry Torch.

All my contacts are on my phone, because I don’t remember numbers – only names. It helps me tremendously to keep up with appointments.

Oh goodness…how did we ever get along without smart phones :-).

I am no photographer, but you couldn’t tell with the photos this little gadget takes! It has so many settings to choose from, my favorite setting is “Action, Sports.”

My team is still trying to figure out how to capture me when I am going 190mph!

“Pressure Is A Privilege” by Billie Jean King, I have read her book three times already. This book actually stays in my bag, and I refer to it from time to time.

I also LOVE Laurie Notaro. My friend gave me one of her books to read, and I have been hooked ever since. Her stories are HILARIOUS!

Right now, I am reading “The Idiot Girl” and the “Flaming Tantrum of Death.”

You know I find myself writing more when I am at airports – I don’t know why that is. In any case, I will write about the race weekend, life experiences or something funny that happened to me.

I make sure to have this mainly for my workouts. I have a variety of music I listen to such as Fleetwood Mac, RUN DMC, Kid Rock & gospel while I run on the treadmill.

This stays attached to my travel bag. It makes sleeping on the plane more comfortable. You will not wake up with cricks in your neck; that’s for sure! 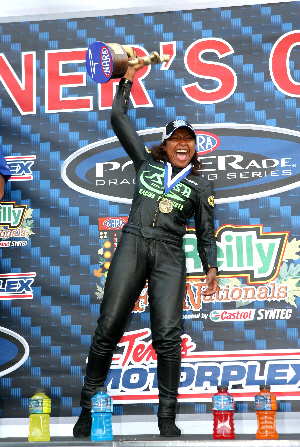 Winning at the NHRA POWERade Dallas 2007, Peggy earned an appearance in the inaugural Countdown to 4 and Countdown to 1, giving her a finish in the POWERade top five in standings where she recorded her post-career-best time and speed.

The three year professional motorcyclist ran an abbreviated season in 2008 where she advanced to the semifinals in Denver, finishing the season qualifying five of six races.

For the 2009 season, she was sidelined due to lack of sponsorship.

For the 2010 NHRA season, Llewellyn set yet another milestone by becoming the first woman of color in the world to become a rider/owner of a professional motorsports team, 2 Wheel Woman Racing.

Named 2009 Female Athlete of the Year by The Elements of a Champion Foundation for displaying extraordinary character on and off the racetrack, Llewellyn, a San Antonio, Texas native, is dedicated to her community through actively being involved with Women’s Sports Foundation’s GoGirlGo! and independently promoting the sport of motorcycle racing, physical fitness education, and following dreams to young girls.

She also supports Divas For A Cure, a unique national service-based 501(c)(3) nonprofit organization of Black and Latina women, who ride motorcycles across country to increase awareness and raise funds to support a cure for breast cancer throughout the year and participate in their signature fundraiser, Divas For A Cure Breast Cancer Motorcycle Run.