In Thailand, I once saw a baby’s crib hanging from the rafters of a family front porch. The mother, smiling gently into the crib, swung it back and forth with such intensity, I got a little motion sickness just watching.

“We do this so the child has balance,” my Thai friend told me later. “The baby won’t get sick from a boat or car later on. “

Then she asked, “What do you do in North America to make the baby stronger?”

To be honest, I couldn’t really answer, not being a mother, godmother, aunt, or even honorary aunt. I pictured Baby Mozart CDs and stackable plastic rings and huge strollers, but that’s just my limited outsider’s view. To welcome a newborn into the world, I know, there are rituals too.

Here are seven ways babies are welcomed into life around the world. 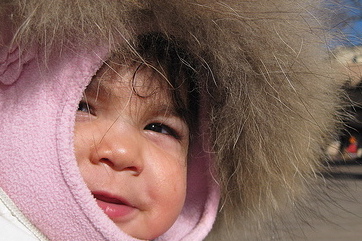 After an Inuit child is born, the community’s Angakkuq, or shaman, performs a kind of baptismal ceremony. The baby is given a protective spirit by the Angakkug, and a name is chosen. The Inuit usually name newborns after recently deceased family members. This custom is a kind of reincarnation: by taking on that relative’s name, the baby will also take on their qualities or strengths.

In hunting communities, the Angakkug will place a small ivory carving of a whale into the baby’s mouth, so that the child will grow up to be a good hunter.

Writer Suzanne P. Reese explained to me that in Armenian culture, as in many others, there is a custom of staying indoors for the first 40 days of a child’s life. In that time, only those living in the house can see or hold the baby. In that time, the mother can rest and receive care, and the vulnerable baby is kept safe from outside germs.

What’s more, this privacy protects the baby from the “evil eye,” which can be put on the baby by a stranger or passerby outside, even unintentionally. Protection from the evil eye means protection from illness or injury. 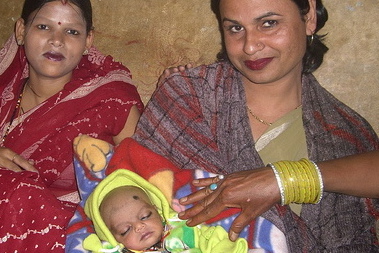 In Hindu tradition, a male child’s first haircut, the mundan sanskar, is an important ceremony in the first or third year of a baby’s life. It is believed that the hair with which the child is born carries unattractive characteristics from previous lives. Shaving the hair frees the baby from the past and allows him to progress into the future.

Some believe that this shaving also stimulates brain development by encouraging circulation. A tuft of hair, called the sikha, is often kept intact and said to protect the memory.

Relatives and friends are invited to attend the ceremony. A priest is brought to the home to conduct the ceremony, and a barber is brought to cut the hair. After the shaving, the baby’s head is covered with a paste of tumeric and sandalwood to cool down the head and treat any cuts.

A Korean child’s first birthday is celebrated with a tojjabi event. Symbolic items are placed on a low table in front of the child. The infant’s future is predicted by which items he or she picks up off the table. A strand of rope represents a long life; a pencil signifies a future in academia; money (no surprise here) symbolizes wealth.

Nowadays, less traditional items are placed on the tojjabi tables; a stethoscope foretells a future in medicine, while a ball anticipates a pro-athlete progeny. A colleague of mine in Korea explained the ritual to me, adding that that her sister put a remote control on the tojjabi, hoping her handsome son would end up a television star. 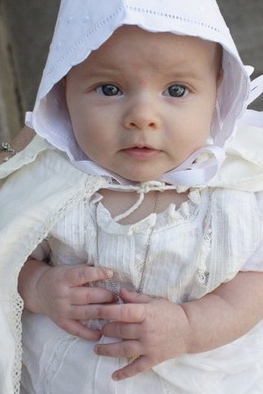 In Ireland, as in any nation with a large Christian population, a baptism is an important ritual in welcoming a newborn into the world. My aunts in Dublin have told me of the particular rituals of an Irish christening.

The baby is adorned with a special christening bonnet, made from a hanky that the mother carried on her wedding day. When that child gets older and marries, the bonnet is turned back into a handkerchief that the bride carries during the wedding.

Another wedding keepsake present at the christening is whiskey cake saved from the mother and father’s wedding. The cake is served at the christening, and crumbs are sprinkled over the baby’s head to give the child health and luck.

In a modern version of this ritual, couples save a bottle of champagne from their wedding day and serve it at the child’s baptism.

A silver coin is usually placed in the baby’s hand during the baptism, to bring prosperity later in life.

My friend Sara in Beijing is pregnant with her second baby. When I asked in an email about names, she said that it was a funny question for Chinese people, and that she wouldn’t be thinking about it for months.

Traditionally, she explained, expecting parents in China don’t settle on a baby name before the birth. In fact, sometimes false names are created while the baby is in utero, to trick evil spirits. In a Chinese given name, the harmony of the characters is very important.

Sound complicated? Many Chinese couples consult with fortune tellers when choosing a baby’s name. The fortune teller looks at these elements and usually suggests several names to the parents, who can choose one. 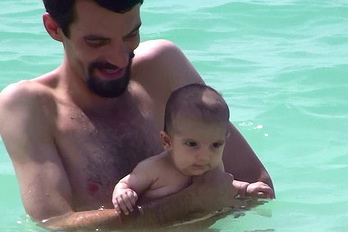 The first bath for mother and baby is a major event. In a traditional bathing custom, Iranian midwives, female friends and family members participate in this bath. They gather early in the morning to accompany the mother and newborn from the house to the public baths.

The jam e chehel klid (cup of forty keys) is important in the ceremony. It is a copper or brass cup with forty pieces engraved with prayers, saints’ names, or “besmelah” (in the name of God). The mother and baby are washed, then the baby is held over the mother’s head and doused with water from the cup of forty keys. The water, blessed by the prayers, serves to protect mother and child from demons and illness. Babies are taken for another bath with the cup of forty keys around the 40th day after birth.

How are newborns welcomed in your culture, or in your family? Have you created any new traditions of your own?