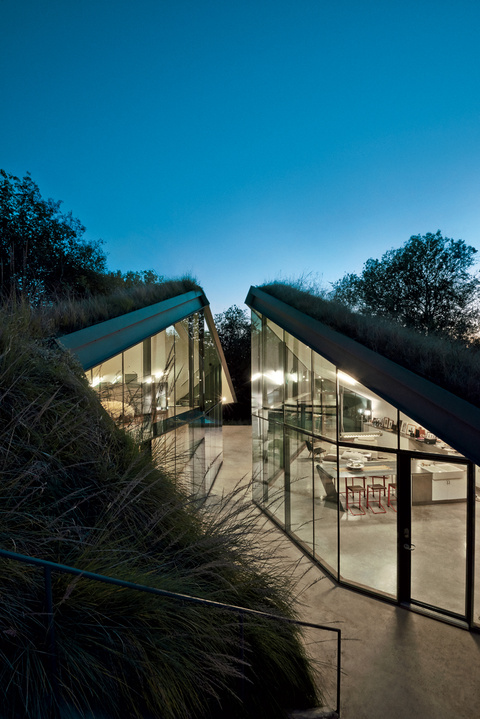 Edgeland House, built on a cliff-top lot in Austin by architect Thomas Bercy for lawyer and writer Chris Brown, is topped by a living roof to help it blend into the landscape. The concrete, steel, and glass house is divided into two distinct public and private halves. Photos: Dave Mead

WHEN CHRIS BROWN needs to think, he grabs his canoe. For the past decade, the lawyer by day, science-fiction writer by night has found peace paddling down a stretch of the Colorado River that snakes through Austin. The Zen-like effect comes not only from the swooping egrets, osprey, and herons that patrol the waterway but also from the geographic history of the area — an industrial-meets-urban edgeland once home to the city dump, the cattle-driving Chisholm Trail, and a B-52 bomber base. “I found it to be a pretty transcendent experience that changed the way I think about the environment in which I live,” Brown says.

One afternoon, while searching for more access points to the river, Brown discovered a path that led down to hundreds of cliff swallows and their mud nests under a highway bridge that spanned the water. He became hooked on the idea of building a house that interpreted the intersection of animal habitat and industrial wasteland. “Something about that idea of wild nature adapted to the structure moved me,” he says.

So, in 2009, newly divorced and living in a downtown Austin apartment, Brown bought an empty lot on a bluff adjacent to the Colorado. If he wanted a piece of gritty history, he now had it. Unfortunately, it came with heaps of cement, rebar, and debris that had been dumped by construction crews and a decommissioned oil pipeline from the 1920s wending through the ground beneath the property. 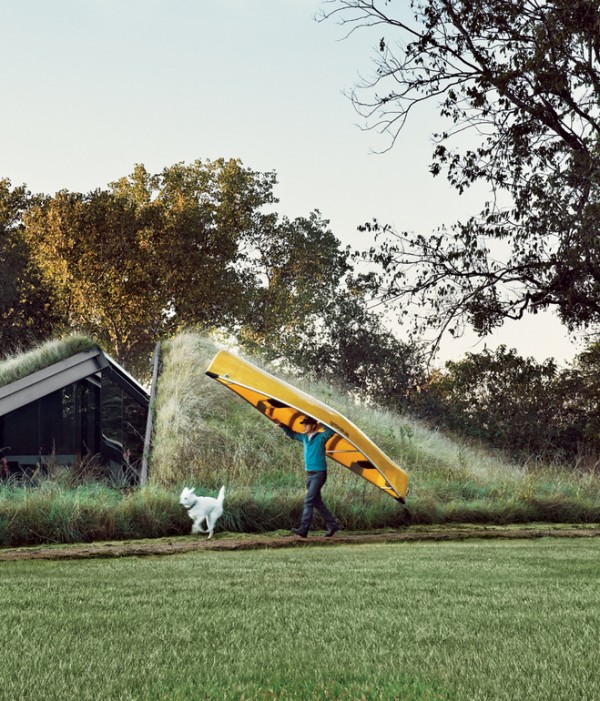 Brown and his dog Katsu head to the river; the path was once a dumping ground on top of a long-defunct underground oil pipeline. The land required a complicated excavation process, offering an opportunity for Bercy to partially bury the house. The green roof was conceptualized by John Hart Asher of the Ecosystem Design Group at the Lady Bird Johnson Wildflower Center in Austin.

“It’s the type of project only a lawyer would do,” Brown says of the mind-draining task of working with a global oil company and the permitting arm of the city of Austin to remove the pipeline, lift the easement, retain liability, and do testing to confirm that the ground was clean.

But there was a silver lining. Because digging up the pipeline created a massive hole, architect Thomas Bercy, of the Austin-based firm Bercy Chen Studio, whom Brown had met through a friend, proposed burying the house partially underground. He envisioned a modern design that nodded to the construction of ancient pit houses — mud-and-grass huts half-buried in the earth by the Plains Indians that once inhabited the area. “We had a hunch that, because of his sci-fi writing and background, Chris would want something more forward-looking,” says Bercy.

Bercy updated the idea with a concrete foundation, a structural steel frame, and glass walls that look toward a rift that divides the house into two parts. One side contains the kitchen, dining, and living room spaces, while the other side contains two bedrooms and a writer’s loft. Brown shares the space with his girlfriend, Agustina Rodriguez, an architect and designer, and his 18-year-old son, Hugo Nakashima-Brown. 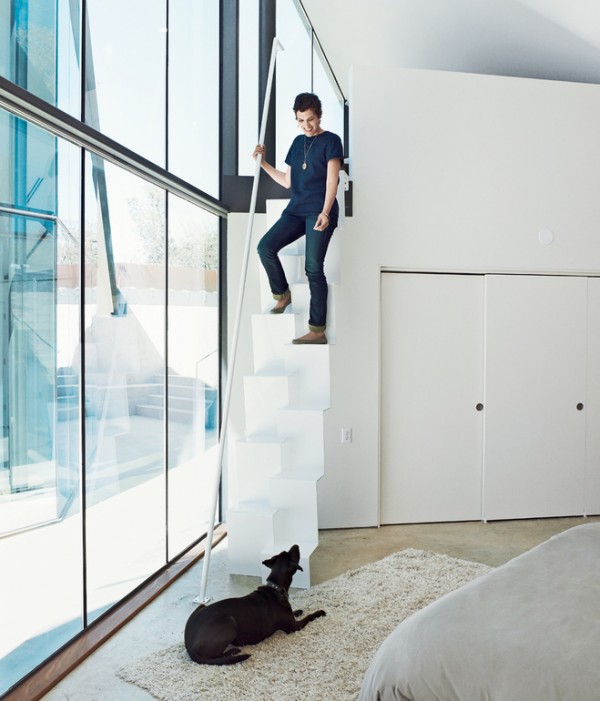 Like the pavilion holding the public spaces, the structure containing the bedrooms is clad in glass on the interior sides facing the courtyard, allowing a constant connection to the outside. Rodriguez (with dog Lupe) designed the steel stairs leading from the mezzanine-level home office to the master bedroom below. The stairs were fabricated by Austin-based Steel House MFG.

Furnishings in the space are of two categories: “Stuff we had before we moved here and white cabinetry from Ikea,” Brown says. He didn’t want any wood in the house, as a matter of personal preference, but some did make its way inside in the form of modern backless stools by local furniture builder Ryan Anderson. The stools provide seating for a large, custom, bent-steel counter surface in the kitchen.

There are also little treasures throughout the house — “Easter eggs,” Brown calls them — found on the property or during walks in the woods out back: Heart-shaped rocks, brightly colored feathers, a bird skeleton, turn-of-the-century glass medicine bottles, and pieces of teacups can be found in the bathroom, in clay pots, or in terrariums that Rodriguez made.

Not that anyone passing by would notice any of this. Few people even realize there’s a house there at all: Tucked beneath a grassy roof covered by nearly 200 species of plants and grasses, the structure is virtually invisible from the nearby street. In fact, the 1,400-square-foot house is so well hidden in the earth that it doesn’t seem to register on the radar of local wildlife either.

Birds, butterflies, bees, dragonflies, hawks, snakes, lizards, and frogs all treat the house like just another grassy knoll. This nature show is visible from nearly every room in the house through the glass-and-steel walls that look toward the rift. “We move between rooms and treat the natural environment around us as a very big part of our home — as our living room,” Brown says. “The sensation when you sit in here and look up is like Avatar — everything buzzing and flying.”

But covering the highly geometric roof with all that greenery was a big challenge for Bercy, who had to incorporate anti-erosion mats in the design in order to hold the soil in place and support the hundreds of plants, which are watered by a drip irrigation system. “It was a way of healing the site’s industrial past,” says Bercy. “The green roof became about restoring the prairie, which created this whole ecosystem. So now the house is alive.” 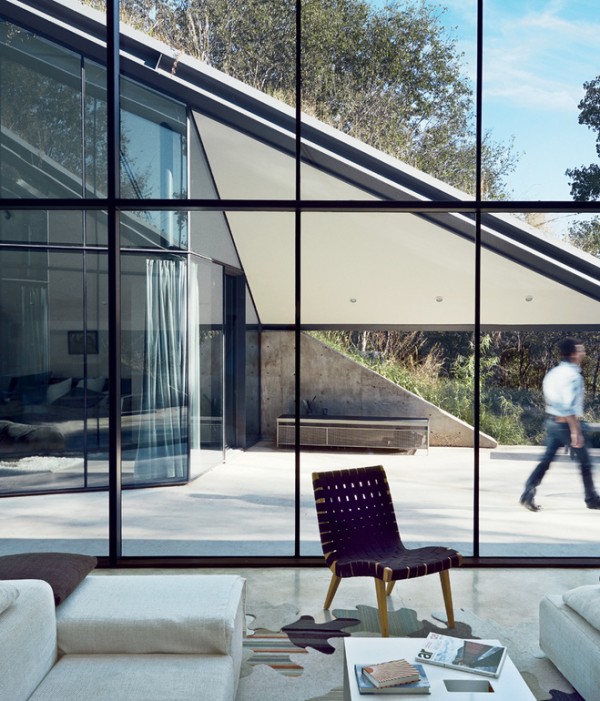 A Jens Risom side chair centers the living room, which looks across the courtyard to the bedroom pavilion.

The forward-thinking approach paid off in efficiency, too: Nine inches of soil work wonders on reducing energy bills, especially when coupled with a radiant cooling and heating system and an energy-exchange method that makes the house “60 to 70 percent more efficient than other houses in Austin, Texas, and even the USA,” according to Bercy.

And, as a constant reminder of where everything began, those cliff swallows from the nearby bridge arrive at dusk and dawn every day, flying in remarkable “bombing patterns, eating all the flying bugs,” Brown says. The whole experience has been eye-opening; he’s come to realize that “you don’t have to go to a park to be in nature — it’s right here in the middle of the city, under the freeway, seen from your living room; if you can learn to perceive it.”

This story was written by Mitchell Alan Parker and originally appeared under the title Country Bunker at Dwell, a Matador syndication partner.

21 Fun Drinking Games You Can Play in Any Bar
The Most, and Least, Humid States in the US
Why You See so Many Babies In Denmark Sleeping Outside and Alone in Strollers
12 Common Hand Gestures in the US That Will Insult People in Other Countries
The Truth About Artificial Vanilla Extract (and Why You Should Always Splurge for Pure)