View all travel news
Top Destinations
Top CitiesView All Destinations
Trending Regions
Trending Cities
Load More
At the base of Echo Mountain in Phoenix, a geometric home by Wendell Burnette opens up to the surrounding desert landscape.

The first time Thomas and Laura Hyland saw the Dialogue House, an award-winning home in Phoenix, Arizona, was 2004. The housing market was in its zenith in 2007 when the couple toured through “almost as a joke,” says Thomas, a business consultant. “We knew we couldn’t afford it.”

The modern three-bedroom, three-bath with a pool is an eye-catcher. By day, the enormous box that forms the second story seems suspended over its corner lot; the floor-to-ceiling glass plane of the living area provides uninterrupted views of downtown Phoenix, South Mountain, and the Sierra Estrella range. At night, with the inside illuminated, and the stucco frame absorbed by the darkness, the focus shifts. Now it’s the activity within the house providing the view; from street level, the home looks like an outsize flat-screen streaming real-time video. Laura, a sales director for Henkel, a consumer products company, used to drive out-of-town friends by the property just to admire it. “We thought it was spectacular,” says Thomas. 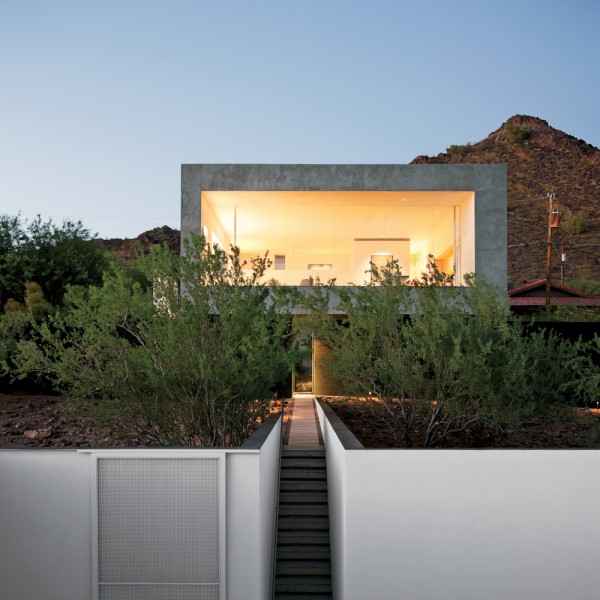 “The challenge was to render the site whole again after the original owner ‘bladed’ most of the creosote bush,” explains Debra Burnette, who conceived the landscape design.

When the home came back on the market in 2010, the price had dropped, and the Hylands, newly engaged, were ready to move out of the townhouse that had started off as Thomas’s bachelor pad. They found the Dialogue House in dire need of repair. “I think a lot of people may have been scared off,” Thomas says. “But I’d gutted my townhome and rebuilt it from the studs out.” Before plunking down an offer, he placed a call to Wendell Burnette, the architect who had originally designed the house to great acclaim back in the late 1990s.

“That was the call you want to get,” says Burnette, whose more recent projects include collaborating on the exquisite Amangiri resort in Utah. “Thomas and Laura understood that you could bring something back, and that the first logical thing to do would be to call the architect.” After the original client commissioned the design, and then another for a smaller budget, he had finished the project on his own. This meant that the last 10% of the house wasn’t built to Burnette’s exact specifications, and it further lapsed over time. “It was heartbreaking,” says Burnette, who lives around the corner.

The project, geared toward owners who would experience it primarily after work, had held such promise: It was featured on the covers of Wallpaper and Taschen’s prestigious 40 Under 40: Young Architects for the New Millennium. Burnette named it the Dialogue House to reflect the relationship between the house and the pool. The former is dominated by the undivided kitchen-dining-living space, whose working bits — stove, refrigerator, cabinets, a hidden media center — are streamlined against the walls, maximizing the space’s volume and making the dramatic view through the glass facade uniformly accessible. The loftlike master bedroom, tucked beyond the living area, gets the view, too. “If there are storms, it’s really cool,” says Laura. “We feel such a part of the desert and the landscape.” 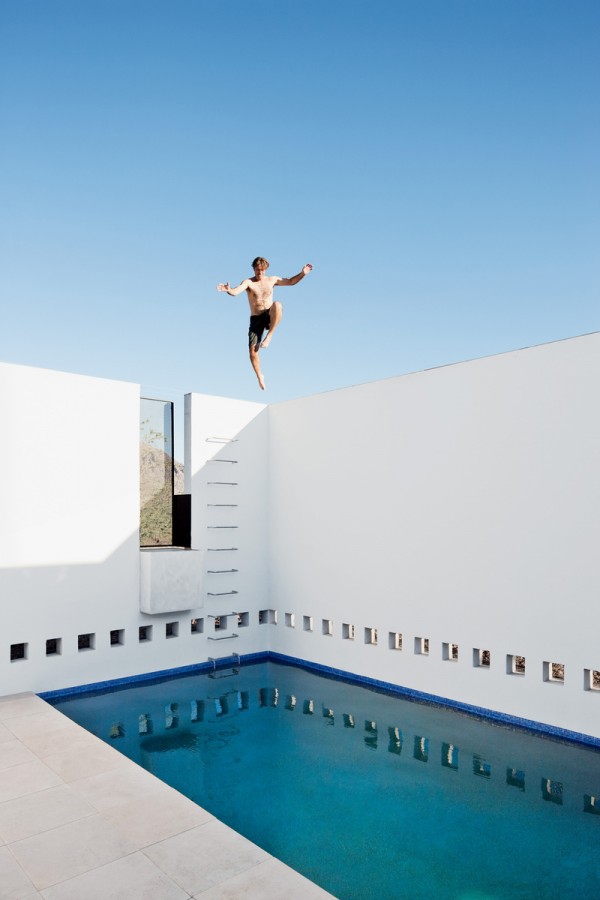 The pool, down a path through ironwoods (25% of the renovation budget went to landscaping and outdoors), is enclosed by 13-foot-high walls and feels as laterally finite as the house feels spacious — but the view up goes on forever. Light filtering through holes cut in the base of the pool’s perimeter bounces from the water onto the far wall, creating a sort of aquatic fireplace display. “One volume gets the city and the valley,” says Burnette, “and the pool frames nothing but sky. There’s a dialogue experientially between these two elemental volumes. They talk to each other.”

The 2,545-square-foot house has a side patio with a sunken conversation pit, from which another dialogue, this one between the house and the surrounding geology, waxes especially eloquent at twilight. The integral color in the new, hand-troweled stucco exterior (replacing the water-damaged original, which had to be removed) was painstakingly matched to the desert varnish, a mineral deposit that covers the rocks in the surrounding mountains. As the light shifts, the dark charcoal walls shimmer with tones of purple, black, rust, and silver.

Interior upgrades included new lighting and electrical elements. The wood floors — repurposed from a gym — were also refinished: On the master bedroom stairs and in the master bedroom, they are whitewashed and neutral; on the lower level, which includes a cozy den, a bath with a steam room, a bath with a Jacuzzi tub, and two guest bedrooms, the floors are stained dark. Additionally, Burnette designed a new bed for the couple, which floats above the floor. 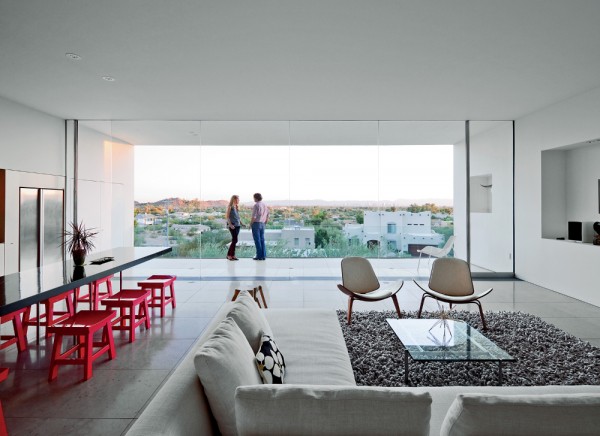 For the seating area, the couple selected a Charles sofa by Antonio Citterio for B&B Italia in addition to CH07 Shell chairs by Hans Wegner, a PK61 coffee table by Poul Kjærholm, and a Nesta rug from Design Within Reach. The dining table, an original design by Burnette, is surrounded by stools that belonged to a previous owner.

“The beauty of this house is that it doesn’t need much furniture,” says Laura, who sent most of her North Carolina family heirlooms back to the East Coast. Thomas, a design devotee from way back, already had the Hans Wegner walnut chairs and a stunning collection of Australian Aboriginal dot paintings from an art gallery just outside of Perth. The big splurge was a B&B Italia Charles sofa. “I spent more on it than I spent on my car,” laughs Thomas. “You can see where my priorities lie.”

“I never thought this house would have a Charles,” says Burnette, who is, coincidentally, currently designing a furniture line. Standing in the living room of the home he designed more than 15 years ago, he’s looking quite pleased. “It’s been a thrill to be able to come back and finish this with clients who really get it,” he says. “Better than I ever thought it could be. Fantastic.” 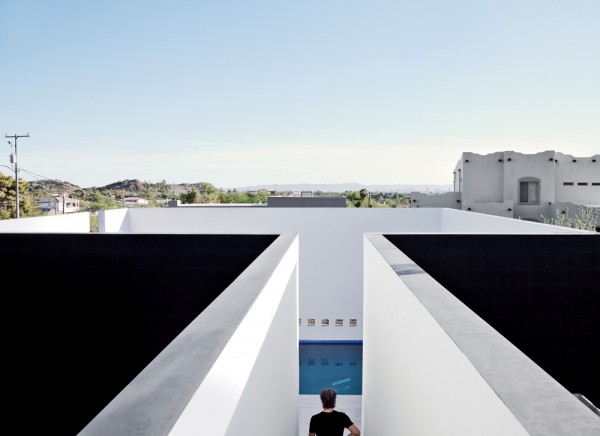 The pool is sheltered on all sides by white plaster walls, a space envisioned by the architect as a volume that’s “half terrace, half cool-water retreat…projected toward the canopy of the desert sky.”

This story was written by Margot Dougherty and originally appeared under the title A Geometric Desert Home in Phoenix at Dwell, whom Matador is proud to count as a content syndication partner.