I DON’T KNOW IF IT’S thanks to the Food Network or if I just never noticed it until I moved to Seattle, but food trucks seem to be real-life-trending right now. And why not – small facilities, a new location and customer base every day, and foodies flock to you.

For those with a love of cooking, an entrepreneurial spirit, and close proximity to a city, starting a food truck might seem like a great way to break free. So how different could it be from opening an actual restaurant? Honestly, I had no clue – but I live in a city with a pretty rockin’ mobile food scene, so I talked with Kamala Saxton of Marination Mobile and Matthew Lewis of Where Ya At Matt to learn more about street vendorhood and the steps it takes to get there. 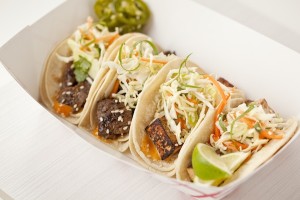 Offering something other food trucks in your area don’t offer is key. In Seattle, food trucks sell everything from duck confit to kimchi quesadillas. Kamala and her business partner Roz Edison were working in educational policy and found themselves looking for a career change. Kamala was already a master at marinating meats, so when a friend suggested the two “build a marinated meat stand on wheels,” they went for it – and their kalbi tacos and shredded kalua pork sliders were an immediate hit.

Matt was a pro chef for 12 years and ended up working in the mortgage industry for awhile before realizing pushing papers wasn’t his dream job. He met Kamala and Roz just as they were starting Marination Mobile and thought what they were doing looked pretty appealing.

Now his truck brings all the foods I miss from my childhood in New Orleans – po boys, muffulettas, gumbo, shrimp and grits – to hungry Seattleites.

Kimchi quesadillas and jambalaya; Kamala and Matt offer food you can’t find elsewhere in this city. So lesson number one – make sure your dishes are something special.

California – specifically Los Angeles – is the homeland when it comes to trucks built specifically for food vending.

“It was February, and we wanted to act fast and launch in the spring,” said Kamala. “We couldn’t find a builder in the Northwest that built custom trucks, so we decided to start from scratch and went to L.A.” 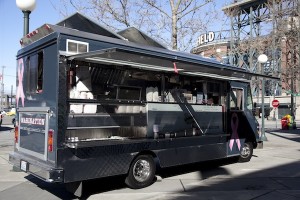 They ended up finding what looked like a decent truck in an old drive-in movie theater, but the owners only spoke Spanish. Kamala asked a passerby for help, who turned out to be the owner’s cousin. “You don’t want that one,” he said. “But I build trucks, too.” They ended up going with him.

Matt priced food trucks online and found what seemed like a great deal in Miami. But if he could go back, he’d do things differently.

“The company didn’t build to Washington state specifications,” he explained. Like restaurants, food trucks have state regulations, so check with yours before throwing down the cash for a vehicle.

Speaking of regulations, street vendors have more than a few barriers to break through when it comes to licenses, laws, and other fun hoops. “It can be frustrating,” said Matt. “But you just have to be persistent.” He missed the opportunity to launch Where Ya At Matt last July – peak street food season – thanks to a delay with the health department.

Your first stop should be city hall for a little research (this is clearly the fun part of the process). Look into food safety regulations in your area – and especially those that pertain to street food. Washington D.C. has a stellar reputation when it comes to vendors, while other cities which will remain nameless make things a bit more difficult.

“I guess I just think it doesn’t matter whether the city is supportive or not,” Kamala commented on facing challenging regulations. “Rules are there for a reason. When you’re starting any business there’s going to be barriers – it just comes down to how badly you want to do it.” 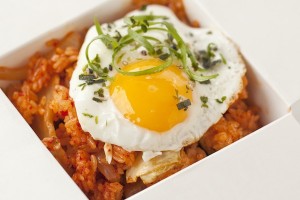 If you’re digging the idea of starting your own food truck, chances are you’ve got a menu in mind. That’s great – but regardless of how many dinner parties you’ve held, you’re probably going to want to hire a trained chef.

“There’s a huge difference between prepping for and serving 20 versus 200,” Kamala pointed out. Marination Mobile employs a head chef and a tiered staff of 25. Where Ya At Matt also has a full staff with head chef, despite Matt being a chef himself.

“We didn’t take into account the 4 1/2 hours it takes to break down and clean the truck after every shift,” Kamala said. “You have to take everything out, refill the tanks – you’re essentially tearing down and rebuilding the kitchen every single day.”

Depending on your experience, you might be able to plan the menu yourself, but no matter how skilled you are with a skillet, plan on hiring a chef.

Summer is the season for food trucks, and for some (aka those selling, say, ice cream), winter just isn’t going to happen. Keep your food, your customer base, and your city’s weather in mind before deciding whether you’ll be open year-round. 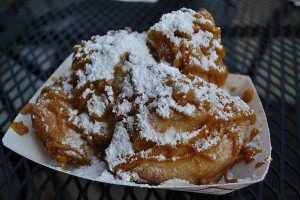 “When we launched, we didn’t want to be seasonal,” said Kamala. “You just deal with the rain in Seattle. Plus we didn’t want to hire seasonal employees – and closing for a long period of time meant no opportunities to build relationships with our customers.” To counteract the dip in sales in chillier months, Marination Mobile offers specials, changes the menu, and communicates with customers to see what they’re looking for.

With stick-to-your ribs food like gumbo and red beans and rice, Where Ya At Matt still gets a nice line going on gray winter Seattle days. He offers a “lagniappe” – a little something extra – as a thank you to the die-hards and an incentive for new customers when the weather is nasty. (And in my book, free beignets with a po boy is a pretty big something extra.)

More research – hooray! Check out other food trucks in your area and take note of which areas they frequent, and which ones they avoid. Places with a high density of business folks looking for lunch are always a safe bet if you’re planning on having daytime hours; for nighttime trucks, gravitate toward the clubs.

Marination Mobile first opened in Capitol Hill, a Seattle neighborhood known for its nightlife, and had a regular customer who happened to work for Amazon. After a few visits and repeated assertions that his colleagues would be into kalbi tacos for lunch, he took it upon himself to speak to his superiors and ended up getting Kamala and Roz permission to park at Amazon during lunch hours – and that was it.

“He still eats for free with us,” Kamala said with a laugh. “We’re very customer driven. It’s the number one reason I love my job – our relationships with our customers.”

Sometimes, a seemingly dead area ain’t necessarily so. According to Matt, his truck started out in Georgetown, a neighborhood south of Seattle, and it wasn’t going so well. He was just about ready to bail and find another location when Where Ya At Matt received its first major write-up in The Stranger.

“It literally tripled our business,” he said. His truck can still be found in Georgetown every Thursday.

Get the word out

There’s your traditional methods of advertising – newspapers, magazines, billboards, etc. Hopefully you’ll be chatting up the press and getting featured before long. But the best way to connect with current and future customers is free and easy – social media. 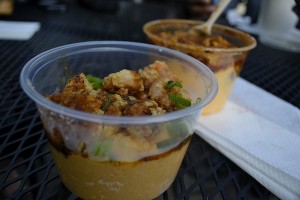 Shrimp and grits (photo by author)

And as with any business when it comes to social media, the key is actual interaction.

“It’s not a one-sided relationship,” said Kamala. “Part of the beauty is that it lets you chat with your customers and get feedback. We have bosses! If we haven’t done right, we hear about it.”