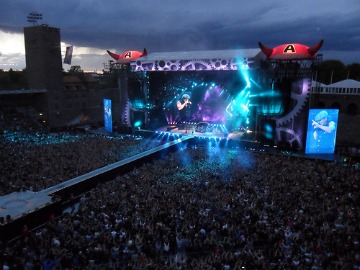 How do you go about finding work?

I get more than enough work through my agency, but there is a catch 22 to driving big trucks. For insurance purposes, many companies want you to be over 25 and have two years’ experience. Yet, in order to gain the experience, you need to be driving a truck!

This is by no means set in stone – I started rock and roll at 23, and with little continental driving under my belt. And a colleague of mine is only 21, yet he came straight out on tour. Just be warned that you may not walk directly into a cream job.

One of the best ways to start is by registering with a driving agency, but keep hassling the specialist tour companies, especially as the summer approaches. This is the busiest season, when outdoor stadium tours are on the road, and extra drivers are needed to cover the work. This is when new drivers are most likely to be taken on.

Flying out to be a second driver is another way a lot of people get started. On last summer’s U2 tour, for example, when we drove Moscow-Vienna-Istanbul we needed 54 extra drivers to assist us. That’s a lot of people to find who aren’t already working, and who are happy to commit to just a few weeks’ work.

Drivers wouldn’t thank me for advertising the pay! Let’s just say it’s considerably better than ordinary trucking. Bear in mind we get paid seven days a week for weeks on end. And our expenses are few, as we get fed at all the venues. You’ll have more than enough to check out a museum in Vienna, or take a boat trip to a Swedish archipelago when you’re in Gothenburg. 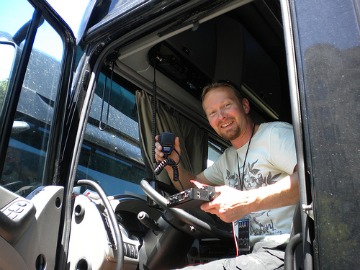 Barnaby fitting a CB radio to his cab.

The hours vary enormously, depending on the tour itinerary. There are times when you’ll drive with a co-driver for twenty hours straight, and then park somewhere noisy and hot. Other times, you’ll be paid to sit in a city with no work for several days, and can divide your time as you please.

But you must be able to stay awake all night – when a show finishes, that’s the cue to start the engine, load up, and drive on.

You must have some crazy stories. Any you care to share?

My best stories are ones that probably shouldn’t be shared! But Eastern Europe and Russia are always an adventure with a truck. Last year I was driving through Bulgaria, en route to an AC/DC show in Sofia, when the police stopped me.
“Too fast,” said the corpulent officer once the dust had settled.
“Yep, I’m in a rush,” I replied amiably. “This is a rock and roll tour. Anyway, how are you?”
Seemingly disarmed, he asked for a “present” of some sort. As it happened, I had an old Back in Black CD knocking about in the cab. Trying to keep a straight face, I signed it for him, which really seemed to make his day. And mine too, actually – it was the first autograph I’d ever given! I was on my way in no time.

What would be your final top tip for anyone who gets involved in this industry?

If you end up as a tour driver, take a bicycle. It’s a great, and cheap, way to explore a foreign city when you don’t understand the public transport system, and don’t necessarily have time to learn.

Prev Page
Tagged
Travel Jobs
What did you think of this story?
Meh
Good
Awesome

How to actually have fun on a family ski vacation
The ultimate fitness challenges for 2020 you need to sign up for now
Breckenridge asks travelers to join in sustainability initiative through volunteer trail work
How to maintain your dog’s health while living the van life
How to go backpacking with a dog, according to an expert