I COME HOME on Sunday to visit my family, and then my Grandma Walsh gets diagnosed with pneumonia and given a death sentence.

My relatives start pouring in from all corners of the country.

When I kiss her forehead in her hospital bed, it feels all hot and papery. She hasn’t known me or anyone for years since she was diagnosed with Alzheimer’s, but I imagine a glimmer of recognition as her hands fumble with her prayer beads. Her 11 out of 12 children are all there to see her.

I’ve never seen anyone on their deathbed before. Her mouth is wide open, trying to suck in breath. My aunts spoon-feed her, like a weird role reversal. I sit and stare and think about the gradual loss of my family, like stars winking out. I sit and stare and think about how five years ago today, Aunt Jenny was shot in the neck with a high-powered rifle by her common-law husband, right in front of her neighbours and friends. In this little town of 1500 people.

Feels like every time we lose someone, a small part of Newfoundland dies too. The smell of smoke from wood stoves and the crackling of fires replaced with electric heat. Thick slabs of fried touton dough smothered in molasses replaced with low-fat cereals and vitamin supplements. We call it progression, not culture. 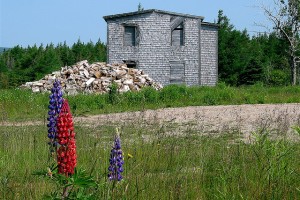 I take walks in the evenings and watch men fill their wheelbarrows with wood and wheel it to their houses. Fresh air really does have its own flavour, and in a garden nearby, two neighbours argue over the death of a chicken apparently killed by a dog. Their accents are so thick that sometimes I have no idea what they’re saying. But I grew up here. I lived here for 18 years.

After Aunt Jenny’s murder, we came together more often. A year after it happened, we all visited my grandfather’s grave, tucked into the furthest end of the Catholic cemetery. When he died nearly 20 years ago, he was one of the first people buried here. Now his headstone is hidden behind rows and rows of other shrines, like tributes to a dying community.

I had brought two pink rocks with me from the shores of Scotland’s Loch Ness. Grandpa Walsh was a retired war veteran who served in Scotland’s forestry sector during World War II. He had talked about going back there until the day he died; the country’s green highlands and v-shaped valleys were reflected in Newfoundland.

I also brought him a bottle of Scotch.

My Aunt Martina took the libation, saying, “Here’s to you, Dad.” We passed the Scotch around and tipped the bottle to our lips, the liquid burning in our stomachs and nostrils.

“One for the Old Man,” said my father, pouring a shot on the grave. Scotch on the rocks.

The night before, we had all gathered in my Uncle Louis’ shed, drinking beer and passing around moose jerky. I ignored all sexual jokes, and tried to resist Mr. Wiser the whiskey. I stepped outside to drunkenly relieve myself, squatting in the grass, looking up at the starry sky and wondering exactly when I completed that transition into adulthood. I decided I could live rural, while rural Newfoundland lives.

Losing Grandma Walsh feels a lot different than losing my Grandma Kendell. She also raised 12 kids, in poverty so severe sometimes my mother went to bed with the frost glistening on the walls of her bedroom.

I lost her years ago, when I was seven years old. I remember my father picking me up in the blue Jeep after school, and then delivering the news. It didn’t sink in until much later, after having spent the day at her house. How strange that place was, devoid of the smells of baking banana bread and her powdery perfume. I stood by the front door, and suddenly there it was. The great realization that my life was stretching forever ahead of me, without her in it.

This past year we buried her son, Uncle Glen. I still hear the whirring of his morphine injections as he shuffled around the house in pain, losing the fight with cancer. For the second time in over a decade, the entire family came together in the village of Morrisville.

After the funeral, we shed our black clothes and headed to the beach to gather around a fire and share stories of Uncle Glen. We laughed so hard, tears poured out of our eyes. His daughter, April, is one of my best friends. We poked at the fire with the tip of our shoes, remarking on the absurdity of what it takes to bring people together. 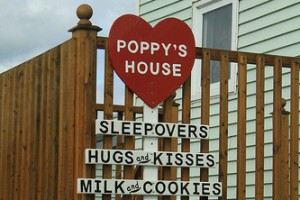 Years after Nanny Kendell died, the town decided to tear down her little saltbox house. I went there to snatch some last relic, anything that could be salvaged. Mom tried to wrench the golden doorknobs from their holdings while April and I peeled pieces of wallpaper from the walls of the upstairs bedroom. The holes in the roof opened up to the sky. I remember my heart wrenching with the rain drenching those old, tired rafters.

Now, here I am struggling to write Grandma Walsh’s funeral program, wondering which font could adequately pay respect to such a matriarch. We were never close. When we’re going through her belongings, we find a newspaper clipping of my letter to Santa back when I was a toddler.

In my grandmother’s final moments, in this slow unravelling of generations, my home becomes less and less a home. This is Newfoundland coming undone.

Tagged
Narrative Newfoundland and Labrador, Canada
What did you think of this story?
Meh
Good
Awesome

Whales, Seabirds, and Icebergs: How To See the Newfoundland and Labrador "Big 3"

12 Signs You Were Born and Raised in Newfoundland

Canadian Natural Beauty Across the Country

Notes From a Canadian Seductress

I Learned To Play the Ugly Stick This Summer in Newfoundland

11 Memories You Have Growing Up in Newfoundland