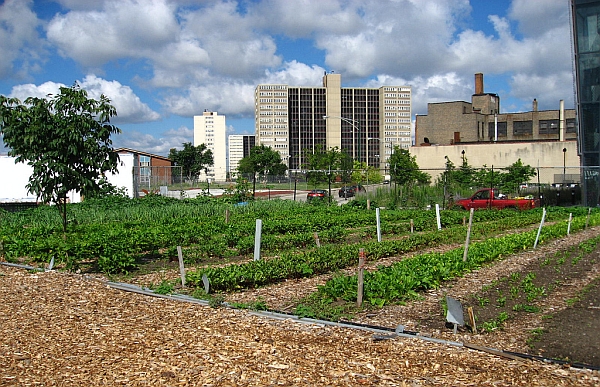 Photo by Linda N.
Growing your own food isn’t just for farmers – you can do it in the city too!

My first encounter with urban farming was in Philadelphia, smack in the middle of downtown. Between cheesesteak joints and T-shirt stores lay a gorgeous green lot, tended by a happy mix of young and old people. Children were gleeful with fat watering cans in their arms. A man carried a handful of carrots fresh from the earth, the skinny kind with green stalks still on them. The kind I had only ever seen on TV, held by Bugs Bunny. Everyone had a job, and everyone was happy.

I think it’s a brilliant way of re-using old commercial space. In a big city, who would really miss one less mall?

The scene was so gosh darn wholesome, I wondered if there was a director and TV crew staked out in the toolshed.

But no, it was the real deal; one more green patch in the ever-growing urban agriculture trend. Urban farming has gained popularity in North America in recent years, as we learn more about the emissions impact of our imported produce.

The trend is taking on some pretty creative forms. The green living site Earth Eats has published a list of six urban agriculture success stories in the United States. This list includes a converted freeway on-ramp in San Francisco and a communal backyard in Seattle, where property owners get a share of the harvest in exchange for use of their land.

My hands-down favourite project is in Cleveland, where an old shopping mall in the city’s downtown core has been converted into an eco-village. The space will include farms, community education programs, and green retailers (think vegan cafes).

I think it’s a brilliant way of re-using old commercial space. In a big city, who would really miss one less mall? 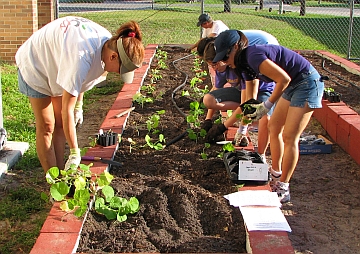 I admit, I’ve never farmed much beyond a few berry-picking afternoons. I’m a born-and-bred city girl, and thought that farming anything beyond a basil plant in the windowbox was best left to, well, farmers. But these urban agricultural projects are a chance for us city folk to bridge that divide.

It’s a great way to better understand the field-to-table journey of my daily fruit and veggies. How satisfying would it be to eat a salad from your own farm? To bite into a tomato that you grew yourself? How much fun would it be, I wonder, to get my hands dirty with that pastoral community garden that I watched with envy in Philadelphia?

That’s the appeal of urban farming for me. Not just the food you can eat, but the communities that build around a shared interest in a greener, healthier city.

Have you ever participated in Urban Agriculture? Or have you ever encountered such a project in your town? Share your stories in the comments below.

For more inspiration, check out our articles Chicken Coops in Your Backyard and Urban Homesteading: Turn Your City Home Into Country Living.

Dutch government recommends single people have a sex buddy during the lockdown Japan will partially pay for domestic travel so you can explore more of the country Loop from Boston to California and back on the ultimate US train trip How one wildlife photographer captured this award-winning shot The TSA has a new rule for snacks in carry-ons. Here’s why.
✖
travelstoke
Download the mobile app
stoked by