View all travel news
Top Destinations
Top CitiesView All Destinations
Trending Regions
Trending Cities
Load More
What steps can we take to become more engaged and responsible consumers? Learn from one traveler who followed his clothing back to source. 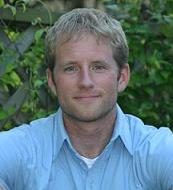 How often do you ask yourself where, exactly, your clothes were made?

Matador member Kelsey Timmerman did, and the question turned into an obsession, a global quest, a blog — and now a book!

Now that Where Am I Wearing? has hit the shelves, I contacted Kelsey to ask him a few questions about his travels in the global garment industry, and what he’s learned about becoming a more responsible consumer.

For those who haven’t been following along on your blog, could you tell us a bit about your quest and how it got started?

It started as an excuse to travel. I was in between gigs and living situations. Annie – my then long-time girlfriend and now my wife – and I had just moved back to Ohio from North Carolina.

I really didn’t know what to do with myself, so I decided to pursue an idea I had to follow my clothes to the factories where they were made.

I was in Central America for two months and only dedicated a single afternoon to the t-shirt factory [in Honduras] and meeting the folks who made it. Once I was standing outside the factory face-to-face with Amilcar, a worker at the factory, I completely wussed out.

I didn’t ask Amilcar what his life was like, how much he made making our T-shirts, or whether or not he liked the job. These really aren’t comfortable things to ask a fella, and deep down I think I really didn’t want to know. 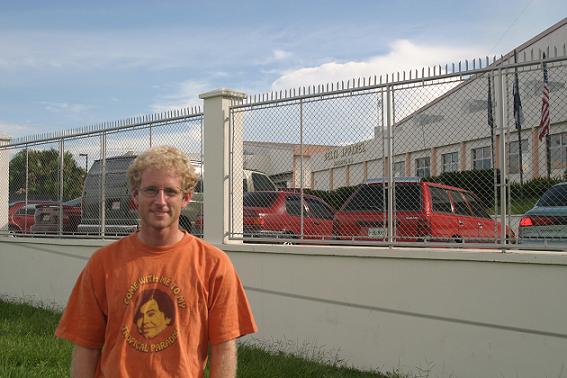 Kelsey outside a garment factory in Honduras

After I returned home, my inability to ask Amilcar about his life started to eat at me. I read books about the garment industry and globalization, attended an anti-sweatshop conference. Still, it wasn’t enough to assuage my growing obsession with tags and who and where made our clothes.

So, I booked a ticket to Bangladesh and scheduled a return flight from Hong Kong three months later.

One of the themes of Where Am I Wearing? is that the garment industry is much more complex than it often seems in the media and the popular imagination. Your solution to those complexities is to become an engaged consumer, rather than draw simple lines between “good” and “bad.” What are some steps we can all take to become more engaged consumers in our daily lives?

In the book I offer up how I’ve become a more engaged consumer, but, really, I think there are probably as many ways as there are consumers.

I refer to the decision of what brands and what countries to support as similar to people’s eating practices. Some of us are vegetarians, some are vegans, some are raw foodists, and some are on the junk food diet.

There are a host of reasons – health, ethics, moral, religion, etc – that determine what we consume. The same should go for the consumption of clothing.

I think if a brand isn’t right for us, we should let the brand know why.

Since I’ve become an engaged consumer, I’ve been searching for brands that acknowledge their products are made by folks on the other side of the world.

I was fact-checking a story on t-shirts for Portfolio magazine and one company wouldn’t even admit that the majority of their t-shirts were made abroad. It was their company policy to not answer such questions. Ridiculous. I told them their competitors were more than helpful. They didn’t care.

Given the choice between two shirts, I’m buying the one where the company at least admits where their products were made. 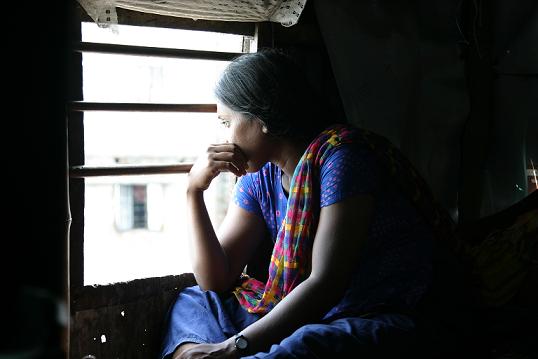 A garment worker at home in Bangladesh

Other companies like Patagonia are taking great steps to show where their products are made and who made them. If you haven’t checked out their Footprint Chronicles feature, you should.

One thing I do is check out a brand’s website to see if they have a code of social responsibility, monitor the factories from which they source, and are members of the Fair Labor Association.

These things don’t guarantee that the workers making the companies clothes are treated fairly, but they do show that a company is more engaged in the process than ones that aren’t doing them.

Since I’ve returned from the trip, I’ve contacted companies to encourage them to post the country of origin in their catalogs and on their websites. The mysterious “Imported” listing on a product’s info has gotta go.

There’s a market out there for brands trying to do the right thing. Brands that do, will add value to their products.

Eva, you remember my beef with Ecko Manufacturing and their “Hot Girls Make Great Clothes” campaign, don’t you?

I called and told them why I would never buy a pair of their jeans and how disappointed I was with their ads. I think if we decide that a brand isn’t right for us, we should let the brand know why.

[Ed. Note: Yes, I remember that campaign. I wrote in about it, and you should, too: eckomfg@ecko.com]

A tool I’ve found useful is this little book titled The Better World Shopping Guide. It’s an easy way to make myself a more engaged consumer and it fits in my pocket. 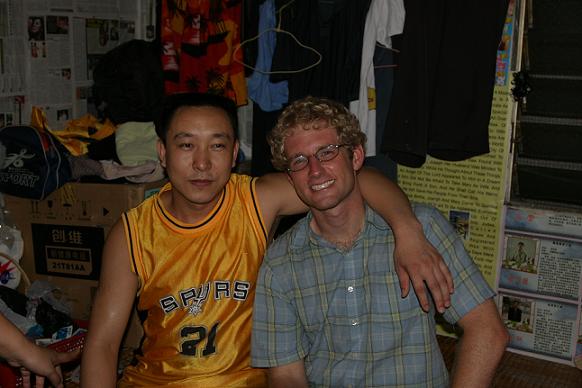 Kelsey and a garment worker in China

Several times in your book you mention the potentially harmful impact of boycotts on the workers they’re intended to protect – but then, responsible or engaged consumerism is really a more subtle form of boycott, isn’t it? Choosing to support some brands and not others?

How do we find the line between encouraging a more responsible industry and punishing the workers?

Boycotting a country’s industry has resulted in negative consequences – mass unemployment and even garment workers turning to the sex trade – so, I’m not really encouraging any widespread boycott of a country.

In my eyes, if an engaged consumer discovers something they don’t like about a brand they are wearing, they shouldn’t just write off the brand, they should pick up the phone and give them a call or drop them an e-mail.

They should express what their concern is and see what, if any, action or response the brand is taking to correct it.

Have you heard of the term buycott? It’s where you support a brand that you feel is doing the right thing. I think that a buycott isn’t so much a way of protesting, but it’s capitalism at work. Studies have shown that 1/3 of Americans would pay more for clothes made under good working conditions.

There’s a market out there for brands trying to do the right thing. Brands that do, will add value to their products.

You contrast your positive reception, from Levi’s in Cambodia, with a less-than-friendly response from Teva in China. I know it’s tough to generalize, but are there any brands you’d recommend as more reputable than others? And who are some of the bad guys?

Mountain Equipment Co-op, Patagonia, and American Apparel are all doing some pretty cool things. But in general I think that most brands, including these, have a long way to go.

I can’t really comment on what ones are good and bad because that really wasn’t the focus of my travels or my research. Since I’ve returned from my quest, I’ve been trying to answer this question myself. I like to think that my wardrobe is a work in progress. 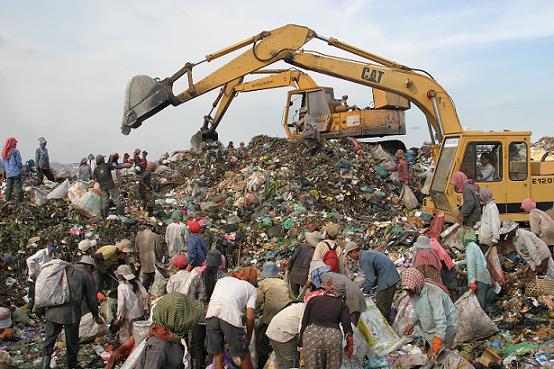 Where Am I Wearing? is as much about the people you meet as the facts you uncover. Is there one especially memorable moment or character that has stayed with you?

Can I pick two?

1. Amilcar in Honduras. I think about him a lot, even though he’s just a name and a face. What his life is like remains a mystery to me. If I added a chapter to the book, I would try to track him down in Honduras.

2. A little girl I taught to play Frisbee at the Phnom Penh city dump. My heart drops every time I think about her. Seriously, it just did as I was typing this. In all of my travels I’ve never tried to directly change someone’s life, but I regret not trying to change hers for the better.

Have you been able to stay in touch with anyone you met? 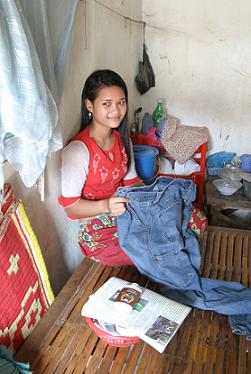 The internet is a wide-reaching tool, but it hasn’t quite made it into the lives of the garment workers.

Most of them do have cell phones, but there’s the language issue. I stay in touch with my translators and I try to keep tabs on the workers through them.

The latest report in China is that a lot of workers are out of work because of the down economy and they’re moving back to their villages.

In Bangladesh this summer the price of rice skyrocketed and workers were struggling to put food on the table.

And finally, what’s next for you? Do you see yourself continuing to write about the garment industry and engaged consumerism, or is there some new quest on the horizon?

Next for me is that I’m going to be a dad any day now. Zoinks!

My wife and I are really excited. I expect fatherhood will be my biggest adventure into the unknown yet.

As for writing, I’m working with my agent on my next book proposal. So, we’ll see how that goes. I would love to get the research/travel done in 2009 and have another book coming out in 2010.

Some of my first published stories were for a column that ran in my hometown paper in rural Ohio. When I’m home, people still come up to me and recount their favorite stories. The majority of these people aren’t travelers, some haven’t ventured beyond the Midwest.

For me, no advance or byline can compete with knowing someone sat in their farmhouse and, for a few minutes, I took them somewhere they’ll never go and introduced them to someone they can see themselves in.

Whatever my next project is, I hope to have a long career connecting readers to people all over the world.

To learn more about Kelsey’s book, be sure to check out our accompanying review of Where am I Wearing: A Global Tour to the Countries, Factories, and People that Make Our Clothes, over at Matador Goods.