MY BROTHER’S GHOST has been busy. Started when I pulled up on the property a couple days back, green hulled black walnuts pelting my rig from every angle no matter where I parked or whether any seed trees lived close by. The last time I was here it hid keys from me and felled a large snag on the tent I luckily wasn’t sleeping in at the time. My second trip in three months to a patch of Appalachian forest my oldest brother called home since 1977. He died unexpectedly of natural causes three years ago in his paid for depression era home on 15 acres below Bee Tree Lake. Bought it when he was 22. Always knew this is where he belonged.

There’s no house now. “David’s Little Sister” as the neighbors call me, hired a 200,000 dollar Volvo track hoe to tear it down. Took a whole 30 minutes to demolish, four hours for the dump trucks to haul the debris to the Buncombe County landfill. Wasps and bees poured from the walls as the machinery did its job. Buzzing insect pieces of my quiet, literary brother’s spirit moved upward through clear hot August sky. I felt him go, but the lingering energy around the flat bare earth where his house once stood chased me to a local bar. I told patrons what I avoided. Didn’t pay for a drink all night. They like ghost stories in Appalachia.

I was raised in these ancient mountains. Moved here in time to start school. First grade to 12th, leaving abruptly a week after high school graduation. Daddy’s forestry career took his wife, myself, and my baby brother to the redwood forests of coastal California in 1978.  I’d only been back once since, at the end of the last millennium. A typical tourist in search of fall colors along the Blue Ridge Parkway.

I worked as an ecologist for the Forest Service like my father then, but my formal training was distinctly western. The natural education started here though, at the heels of a man who let his youngest daughter follow him as he tried to figure out these complex woods, forests with a species diversity found nowhere else in the world.  In the valleys and peaks of one of the world’s oldest mountain ranges, oak, yellow poplar, hickory, maple and beech mix with pine, cedar and hemlock. South meets the North. Warm tree species and cold thrive in laced ecological harmony. 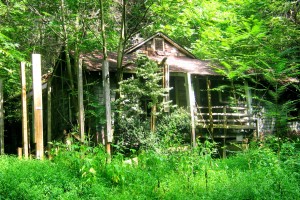 This was my father’s Grace land. The forestry Mecca where the first of his kind came to study in the Biltmore Reserves owned by George Vanderbilt. He’d take us on repeated day trips to the Cradle of Forestry  where over a hundred years ago Gifford Pinchot and Dr. Carl Schrenk established the first school to train professional foresters in the United States. I always thought Daddy would return here one day, an accomplished scientist and passionate environmentalist, returning to the place that first shaped his scientific kind. But he died two thousand miles away from here, in Boise last June. Two years almost to the day he lost David, his oldest son and namesake. Daddy became a westerner – calling Oregon and Idaho home the last three decades – and seemed happy of it. Until this unexpected adventure in sibling archaeology, I thought I’d always stay west of the Mississippi myself.

David was like me, a romantic loner. No family, no long term romantic partner, happy in solitude with a good book, but dissimilar to me and my minimalist tendencies in his relationship to stuff. He hoarded. A and E Channel “Hoarders” episodic behavior, and the physical legacy of his life required someone to sort through the wreckage. When I was a teenager I remember visiting not long after David bought the place.  Six months in and car parts overflowed in the kitchen sink, piles of first generation computer equipment gathered dust in corners, and the goat trails of newspapers, magazines and books grew, directing anyone’s movements through an already well worn house. The acreage outside lent itself to hillbilly style car collections and stacks of construction materials for various projects churning in David’s brilliant, overactive brain.

By spring of 2011, 33 years had passed, house condemned by the county and acres covered with more building materials, dead car chassis overgrown with dark green ivy. It took all of April and part of May to clear the property: multiple dumpsters filled, repetitive trips day after day to landfills and scrap yards. Belongings still worth something were sold, including 2 sailboats and a 1973 31 foot Airstream Land Yacht.

Amongst the frenzied daytime activity, quiet dusks, and damp Appalachian spring mornings, there came a shift in my perception of where I wanted to be.

Amongst the frenzied daytime activity, quiet dusks, and damp Appalachian spring mornings, there came a shift in my perception of where I wanted to be. One of the young men who worked for me would say out loud every time we came back to the property: “Here we go… back up the tree.” referring to the name of the road we traveled, Bee Tree Lake Road. Appropriate for a forester’s kid to call this home for so many years.

That daily exclamation from the back seat of the pick up captured perfectly what I planned to do. The American West didn’t fit any longer. This southern tomboy wanted, no needed, to come home.  I went back to Idaho, packed my stuff and re-traced my steps from 1978.

Well…almost….I’m not all the way there. Calling the Highland Rim of middle Tennessee and home for now till I find my own spot in the mountains.  I’ll frequent Asheville, N.C. often in the coming year to plan a long overdue high school reunion. But this Cookeville back yard, two blocks from the Tennessee Tech campus, is the last place I saw David alive. Spring of 2006 and I was leaving on an extended trip to work with endangered rhinoceros in southern Africa. David had given me a recording of “Lone Rhinoceros” by Adrian Belew as my parting gift.

Yet a day before my trip, dogwoods in full bloom, we weren’t chatting about my coming adventure overseas; the oldest son and youngest daughter of the Olson clan were in an argument. He’d just bought a 19 foot sailboat on e-Bay and me, having spent six months in the Sea of Cortez crewing on boats of all shapes and sizes five years back, generously provided my best sailing advice: technique, maintenance and off season storage. It wasn’t welcome. With a half serious smile on a stubborn throwback Civil War face David replied, “my little sister doesn’t tell me what to do!”

Oh I did so much more than that these past few months Big Brother, but right now wish I could hear those words in your Carolina twang just one more time.