14:22 Mar 7, 2018
Top Countries
Top CitiesView All Destinations
Trending Countries
Trending Cities
Load More
Rodents are tragically misunderstood. Not even the movie Ratatouille could change the perception that all rodents are vicious, sewer-dwelling beasts that feverishly gnaw on everything from cement to human ankles.

I CAN SAFELY say that most Americans would rather find one on a glue trap than a dinner plate. That is unfortunate, because throughout the world, there are other species of rodent that don’t share the ferocious demeanor of their far distant cousin, the rat, and instead live much more cleanly than industrially raised chickens.

These four are not only more flavorful than boring ol’ chicken breast, but also long for favorable wine pairings, which I include for your dining pleasure.

The most entry-level of dinnertime rodents may achieve such status from its cleverly porcine-inspired name. It also helps that people of the Andean regions from Colombia to Bolivia, and especially Peru and Ecuador, have been roasting guinea pig — better known as cuy — for millenia.

This gentle vegetarian animal turns up braised in a yellow pepper sauce at upscale tourist restaurants, while at street stalls, it is fried with its claws still attached — as if in some imitation of a carbonite-frozen Han Solo. 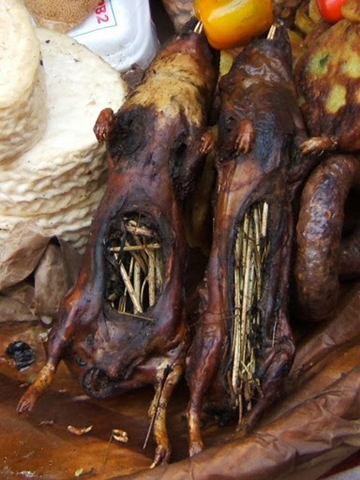 Still other eateries serve them butterflied and roasted (have your camera ready). Staying true to its name, guinea pig meat resembles roast pork, especially when its skin becomes lasciviously crispy and greasy.

The guinea pig is usually viewed as a pet in the States, but Anthony Bourdain does not seem to think this tradition will get in the way of moving guinea pig to the meat column. On his recent shooting of No Reservations in Ecuador, he tucked into cuy and commented “If kids knew how delicious these things were, there would be lots of empty cages at schools across America.”

Wine Pairing: a white Chateauneuf-du-pape will hold up to the generous fat under guinea pig skin while the wine’s floral fruit will find a soul mate in this tender white meat.

A skittish herbivore, the agouti, a native of Central and South America, is also confusingly called a bush rat, even though it is not a rat, it has no tail, and it can weigh up to eight pounds.

So let’s say you’ve just speared one; how do you prepare him? Slow-cook him over a low fire, because his natural jumpiness means the meat needs a few hours to loosen up. As I discovered on the Caribbean side of western Panama, the agouti takes well to barbecue sauce.

The rewards of eating agouti go beyond indulgence of taste buds: in our hectic lives, we should be thankful to find a meal that requires a long time to cook, allowing us to spend more time with our family and friends around a fire while the critter roasts. McAgouti? I don’t think so.

Wine Pairing: Barbecued agouti calls for a peppery Syrah, especially if the sauce is tangy and spicy.

Next Page
Tagged
Humor
What did you think of this story?
Meh
Good
Awesome

10 incredibly stupid questions every bartender has had to answer