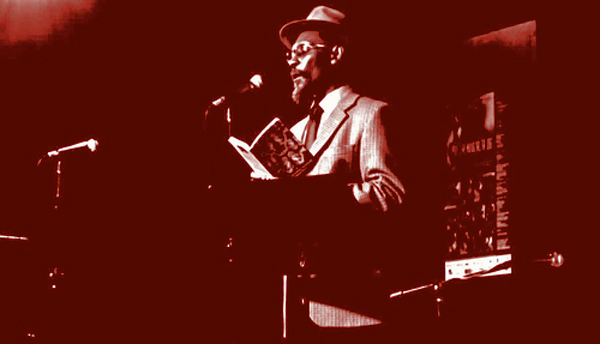 Photo of Linton Kwesi Johnson: ismocritico666, Feature photo: drumecho
Dub emerged from the studios of Kingston, Jamaica in the ’60s and went on to become one of the 20th century’s most influential music genres in both form and function. Its thread can be discerned in a wild number of music styles, from hip hop, disco, drum & bass, trip hop, dubstep and more. And let’s not forget – without dub, we wouldn’t have the remix!

In tribute, we’ve collected together 50 killer dub albums. Many of them are seminal, proto-dub records by JA originators like Lee Perry, King Tubby, Prince Jammy and others, but we’ve also included some classics plucked from the “dub diaspora” – the second wave of dub music that emerged in the UK with pioneers like Adrian Sherwood (On U Sound), Jah Shaka, Linton Kwesi Johnson and Mad Professor, up to modern electronica/glitch-dub practitioners like Berlin’s Stefan Betke (Pole) and Burnt Friedman.

It’s not a definitive list, just a bunch of our personal recommendations. We hope you enjoy them.
The Upsetters – Super Ape (Island, 1976)

The best of all Lee Scratch Perry’s Ape/Kung Fu inspired albums. Each riddim is absolute classic Perry and has been bitten by lots of other reggae artists.
Super Ape in A Good Shape from Super Ape:

The dub version of Horace Andy’s beautiful In the Light album was created by Prince Jammy. The meld of Andy’s distinctive high tenor over soundscapes put together by Jammy, Leroy Sibbles, and Augustus Pablo is just sublime.

Dubstep producer Kode9 (owner of the much lauded Hyperdub label) teams up with menacing vocalist The Spaceape (aka Massive Attack’s Daddy G) to unleash a shuddering bass-heavy vision.

Zany genius all the way through, from the bonkers “Black Panta” to the minatory “Drum Rock”. Full of incredible surprises.

The first and perhaps best of the Dub Me Crazy series from the leader of the 80s UK dub movement. The new digital sound and expanded layers of sound are just incredible.

Mad Prof and Perry did several albums together but this one stands out. Spaced out, digital dub masterpieces featuring Perry on fine, rambling form.
Heads of Government from Black Ark Experryments:

You may recognise this music from Don Letts’ (of The Clash fame) film “Punk Rock Movie”. Produced by Errol Thompson rather than Joe Gibbs, yes, but it’s mighty Mighty all the same.

Stuffed full of Kingston’s most famous musicians, the dubs here were cut at Channel One before being mixed by Prince Jammy at King Tubby’s studio. Boom!

Arguably one of the most influential UK dub albums this collaboration between dub poet Lintn Kwesi Johnson and Dennis Bovell features heavyweight smashes like “Victorious Dub” and the appositely titled “Brain Smashing Dub.”

An excellent collection of late Randy’s and early Black Ark dub versions that includes a previously unreleased mix of the Congos classic “Solid Foundation” and rare dub mixes of Junior Murvin’s “Roots Train” and Max Romeo’s “War in a Babylon”. Solid Foundation from Upsetter in Dub:

Regarded by many as one of the greatest dub albums of all time thanks to the stature of the individual talents involved and the subtle mood shifts and complex playing. Two true dub legends Augustus Pablo and King Tubby combine on this mythical record.

This concise take on dub from the master is super-stripped down but simply features some of the best work he ever did.

One of the earliest purveyors of dub, Hudson’s earthy and rhythmic style eschews sound effects. Here the bass and drum rhythms propelled by the Wailers’ rhythm section collide with spectral vocals from Horace Andy, Big Youth and Hudson. Satia from Pick a Dub:

The dub remix of Massive Attack’s second album Protection could have been more edgy but still stands tall as an example of dub’s power to refract other music genres.

16 dubs from the vaults of veteran producer Bunny ‘Striker’ Lee, mixed by the likes of King Tubby and Prince Jammy and featuring musicians like Sly Dunbar, Robbie Shakespeare and Jackie Mittoo. Beautiful.

This is the only collaboration between Lee Perry and The Congos, but what an incredible album. Perry’s darkest production yet matched to the Congo’s spiritual / biblical imagery. A deep and fulfilling journey.
Open up the Gate from Heart of the Congos:

Scientist – Scientist Rids the World of the Evil Curse of the Vampires (Greensleeves, 1981)

The riddims for this were recorded at Channel One and mixed by Scientist at King Tubby’s studio. Several tracks from the album were featured in the soundtrack to the popular video game Grand Theft Auto III.

One of the highlights of Pablo’s extensive catalog, ‘East of the River Nile’ is an all time classic from the master of the melodica.

With a title inspired by Brian Eno and David Byrne’s ‘My Life in the Bush of Ghosts’, this is one of AHC’s more experimental and psychedelic takes on dub. Unique and worth checking.

This release was one of the first UK Dub releases to use tape and digital echo on a horn section and a precursor of the subsequent explosion of ‘electronic dub’.

An aberration for vocal group Black Uhuru, these ten riddims, laid down by Sly & Robbie for various Black Uhuru albums, were mixed to perfection by Paul “Groucho” Smykle.

Phase Selector Sound are two former punks who create a unique dub sound that spans the classic and the modern. A tour de force.

This album is testament to South London’s legendary Ariwa Studios. It features five dubs from Mad Professor and five from Jah Shaka.

Scientist – Dub in the Roots Tradition (Blood and Fire)

Producer Don Mais enlists the talents of the then-17-year old Scientist to mix the dub versions for his Roots Tradition label’s B-sides. It’s a fascinating insight into the young dub maestro’s early efforts and contains some proto-dancehall riddims too. Dub Bible from Dub in the Roots Tradition:

King Tubby meets the (re-formed) Skatalites via Lee Perry with the addition of musicians like Augustus Pablo, Ras Michael, and Earl “Chinna” Smith with mesmerizing results.

Multi-instrumentalist Ryan Moore – who played bass for the Legendary Pink Dots – deploys a radical take on the Tubby/Perry blueprint with this debut – all gooey basslines and deep, pulsating textures – and no electronics.

Forces of Victory was the record that confirmed LKJ as a major talent. Produced by Dennis Bovell it’s a relentlessly dramatic and intense record – and all the more memorable for it.
Want Fi Goh Rave from Forces of Victory:

This Bill Laswell project involves Sly Dunbar on drums (programmed), Gabe Katz (bass) and DJ Spooky on scratches. Sparse and deep with ghosts of voices and electronic bleeps it has a modern, meditative vibe.

Stefan Betke’s follow-up to his crackly minimalist “1” is melodically and rhythmically engaging, floating through itchy static and vinyl pops. A fine introduction to glitch-dub.

This reissue features two of King Tubby’s earliest and most influential albums – Dub From the Roots and The Roots of Dub. Both produced by Bunny Lee, and both feature great mixing work by the King.
Roots of Dub from The Roots of Dub:

Originally a limited 1979 pressing the lovely fluidity of Far I’s music, as delivered by his bass ace Flabba Holt, is here rendered with machine-like precision by Style Scott on drums. This drum and bass meeting laid the foundation for definitive‘80s reggae group Roots Radics.

The mythical Lee Perry Holy Grail. 20 dubs from his mid-‘70s peak that were only ever pressed in tiny one-off white label ‘specials’ for the Kingston soundsystems. An essential hour.

Yabby U Meets Deliver Me From My Enemies (Grove Music, 1977)

Originally issued on London’s Grove music in 1977, this features some weighty dubs, written to ward off the threat of Obeah magic. Get lost in tracks like “Judgement time” “Amlak” and “Pick the beam”.

Clayton’s first full-length for Stefan Betke’s (aka Pole) Scape label is a masterpiece of experimental dub. Drawing on the work of Berlin’s Basic Channel and Chain Reaction crews this is dubbed out, stripped down electronic dub at its best.

Up alongside Perry’s best work this heavy dub set is full of dark and complex masterpieces. The Black Ark studio hosted Aisha Morrison dubbing his unrelenting creations. Scratch was way ahead of his time.

Dense, thick grooves full of reverb and mixed with breaks and jazz from the Groove Corporation. Covers all the the dub plates.
Rock Steady from Dub Plates From the Elephant House:

Niney is the producer here, with I Roy, Big Youth, Dillinger and Trinity featured as toasters. A slick album full of incredible grooves and amazing vocal performances.

Bubbling dubs from producers Sly & Robbie of popular reggae tunes from vital artists including Black Uhuru, Burning Spear, Wailing Souls. The vocal mixes of the tunes on this album in their original form are available on Island Records.

Randy’s Studio 17 was frequently used by Perry before Black Ark but is often forgotten. Chin’s son Clive produced these subtler than usual ‘70s dubs, where musicianship reigns over effects.
From Forward the Bass Dub From Randy’s:

Paul is currently writing a book about the Dub Diaspora for Reaktion. Ben Rimmer has written for music and travel publications including The Fly; AU; Jungle Drums; The British Council’s Incubator Project; and Glasswerk. He is also the press officer for the UK’s leading Brazilian record label Far Out Recordings.

Americans are rushing to buy a second passport, and here’s what it takes