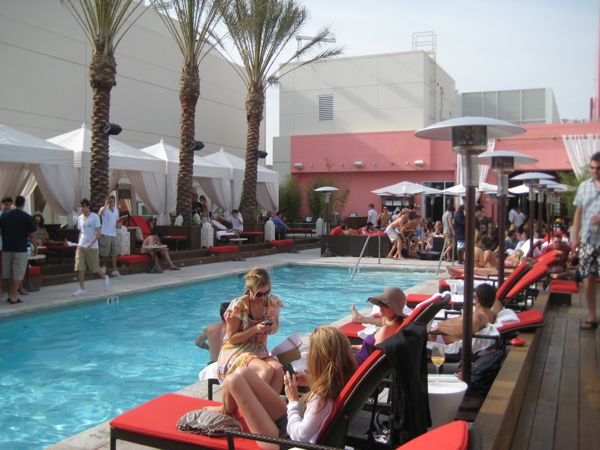 This is the pool that everyone’s trying to get into. I’ve read several Yelps by people who have waited in endless lines but when I arrived (4pm on a Saturday) I simply got in the elevator and went to Drai’s, the area of the W complex that houses both the pool and a restaurant.

The area was packed, mostly with people clumped in groups of lawn chairs. Big, Bedouin-looking tents ran the balcony and were filled with smaller numbers, who paid $500 to secure the spot (the guarantee acts as your bar bill).

I purchased two glasses of something called a Peach Crush and was set back $35, even with a cheapskate tip. It should be noted that amazon.com sells actual peach trees for just double that price.

The DJ booth sat on a balcony above the bar, pumping out tranquil beats and lulling everyone into the sunset. The views were, as promised, incredible, but not much different than those from the top of the parking garage at Bed, Bath & Beyond around the corner.

Bottom Line: If you’re in LA and looking to experience The Los Angeles Thing, this would be the place to point yourself. 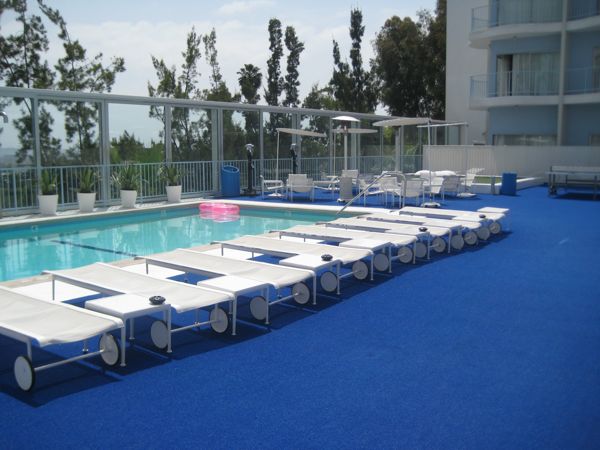 The Standard before the crowds arrive.

The pool at the Standard can be a rowdier, more zany affair, which seems to depend on just how many Brits are staying there at the time. The DJ crowd still shows up in evenings and as summer kicks in, it livens up on weekend afternoons. The whole deal sits on a balcony overlooking the city.

I chose a happy hour drink by the pool with a friend, a glass of dangerous house wine in a plastic wine tumbler. It’s not the place for a classy cocktail – the mojitos even taste like something from a pre-made mix. If you can embrace the Ibiza Light vibe then you’ll do well here.

Two guys played Contact Ping Pong while about fifty people mingled, the girl next to me leaving to take a powernap before she went out tonight to “get all kinds of messed up.”

Bottom Line: The Ikea of the LA pool scene. Not the most gorgeous but good enough to get the job done. 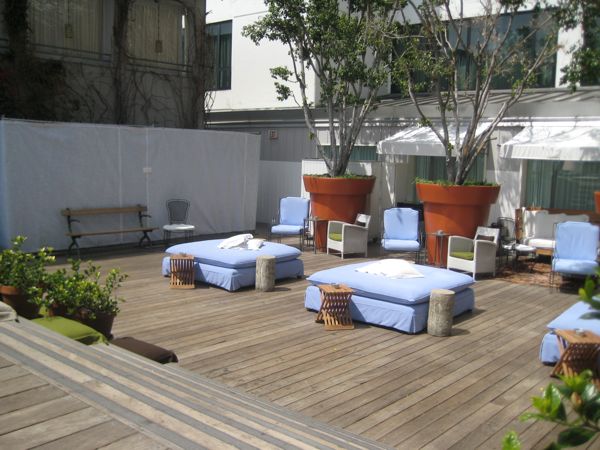 While not a particularly large pool, The Mondrian has done an excellent job of making the surroundings feel regal, from oversized potted plants to an ottoman large enough to seat 40. It sits a stone’s throw from the hotel’s Asia de Cuba Restaurant, which also delivers some tasty food.

I entered the pool bar, which felt Jamaica-gone-Miami, a bungalow with an impressive cocktail list and a price tag to match. Still new to LA, I chuckled to see that the Cleanse Cocktail – made of water, cayenne pepper and syrup – went for sixteen bucks. The fresh fruit martinis looked very appealing, but that’s probably just because I’m a sucker for a flavored martini.

Bottom Line: A ritzy, lazy afternoon if you’re not afraid of the sticker price and an excellent place to wallow. 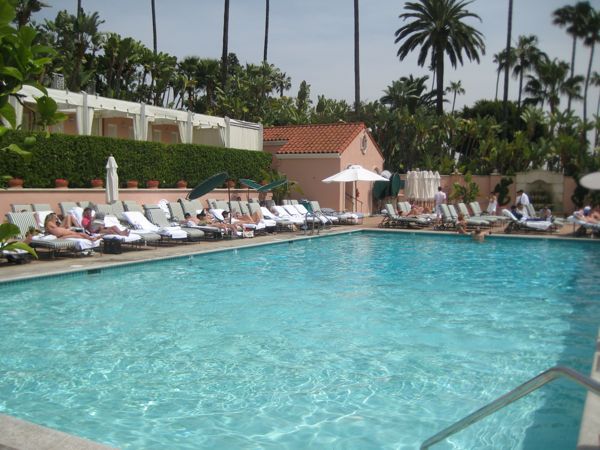 Lounging at The Beverly Hills Hotel

The poolside restaurant here smells of classic Hollywood and is most often a great spot for celeb watching. Think green and white umbrellas, fluffy towels and plenty of people snoozing or swimming.

I chose to sit at the poolside restaurant and made quick work of a club sandwich and an Arnold Palmer. As good as it was, I coveted the next table’s McCarthy salad, a concoction made with lettuce, chicken, egg, beets, bacon, tomato and cheddar.

The staff works diligently to treat everyone like a king and while the prices are high for upscale diner food, they’re aren’t ridiculous. Assuming you have still have a credit line.

Bottom Line : A classic spot to kill an afternoon if you want to feel like a black & white movie star. 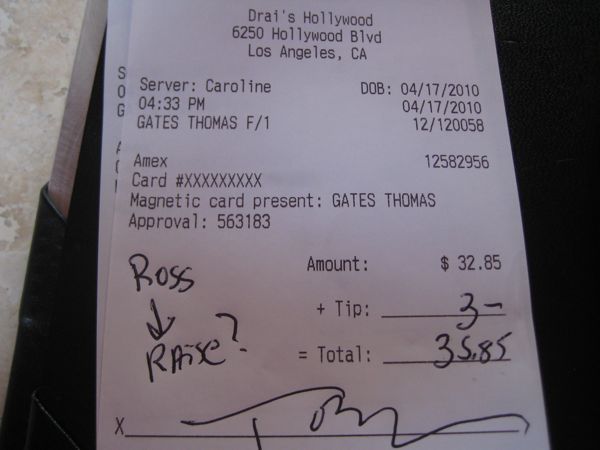 The bill from Drai’s at W Hotel. Ross?

While not much to look at, this courtyard pool is in the middle of one of LA’s go-to celebrity stays, which assures a few at-least-B-listers will be hanging at some point during the weekend. The Sunset Marquis also contains a recording studio, which turns up musicians looking to do some down-low recording.

This is not really a destination pool but this actually helps, as it doesn’t attract an overwhelming crowd. The hotel restaurant just around the corner makes some incredible food and serves as a great pit stop between laps, especially on a brunchy Sunday.

I grabbed a quick beer and lamented the fact that just hours before Chase Crawford had been sunbathing. You know, because we’d have had a lot in common and could have chatted.

Or I could have ogled him like some kind of pool-crashing pervert.

Bottom Line : Come from brunch at the restaurant and stay for a drink at the pool.