The most memorable things we come across when we travel often took a long, winding path to get to what they are today. This is Origin Story, a series that looks into the various influences that made the cultural touchstones and local quirks that we know today.

If you drive west from Downtown Los Angeles for long enough, you’ll be faced with a decision: Do you want to make a turn at a 45-degree angle or a turn at a 135-degree angle? The majority of the time that decision has to be made on Hoover Street, which delineates the northwest- and southwest-oriented streets of old Spanish LA and the north-, south-, east-, and west-oriented streets of modern LA.

Glancing at the intersecting lines on a map (or, more likely, Google Maps), you might think to yourself that something funny is going on. There’s actually a very good reason for the layout, though, and it all goes back to the first Spanish colonies on the west coast of what is now the United States.

In 1573, King Phillip II of Spain created the Council of the Indies to regulate its new territories. By 1680, the council’s rules were codified as the Laws of the Indies. Spain was one of the first major European powers to colonize the Americas, and the rules were meant to dictate how, exactly, that colonization was to be done. It covered just about everything and was regularly updated. One of the later versions dictated the layout of Los Angeles when the now-sprawling city was officially established in 1781. 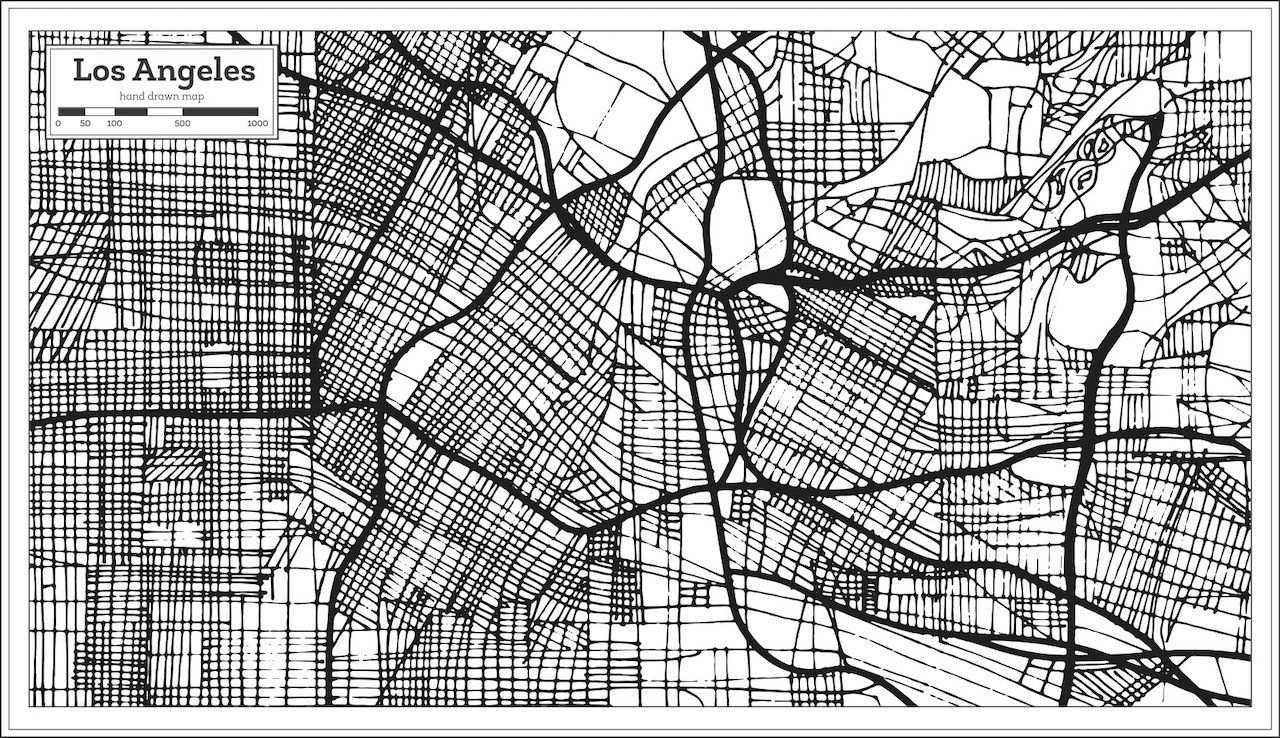 The Laws of the Indies dictated that cities be 20 miles from sea, near a freshwater source, and close to a Native American tribe. The site for LA is around 30 miles from sea, has the once-thriving LA River nearby, and was at one point nearby to the Tongva village. Hence the location. The law also dictated that each street be laid at a 45-degree angle from the center plaza of each settlement to create wind tunnels and shed somewhat equal light on each building (not to mention throw more shade on the streets compared to the east-west oriented streets that were in line with the sun’s rise and set).

The first LA layout was completed by four soldiers and 44 civilians, 22 of whom were children, according to a historical analysis published by the city’s planning commission. Due to the overflowing river at the time (long before it was lined with concrete), the center of the city was moved three times over the first half-century of LA’s existence. The streets followed the flow of the river, forcing them to align at 36 degrees rather than 45, which was apparently deemed close enough. The river also forced some irregularities with each move of the city center because city planners had to work around the existing farms with each adjustment.

The city’s historical analysis notes that, when all movement of the location of the city center was said and done in 1822, “it failed to measure up to the neatness envisioned by the Laws of the Indies.” Still, for the average eye at the time, it worked.

This orientation was in stark contrast to the Dutch and English colonial towns of the same era, James Rojas told KCET when he was LA’s city planner in 2012. Rojas told the station that what is now Long Beach would have been a better strategic location because it had two rivers, more resources, and was closer to Native American populations.

Yet it was the Spanish who decided the layout of what would become many of the modern cities of South America and western and southern North America. And thanks to the Spanish, Los Angeles has its irregular streets.

Skip Marfa for These True Small Town Texas Experiences
This New Cabo Resort Is The Perfect Spot To Reinvigorate Your Love For Travel
Touring Hawaii by Train Is an Unexpected and Fun Way To See the Rainbow State
11 Key Largo Airbnb Rentals To Experience the Best of the Keys
I’m a Professional Road Tripper. Here’s What I Never Leave Home Without.