A massive five-day music, culture, seafood, and booze-fueled party, Sauti Za Busara (“Voice of Wisdom,” in Swahili) draws thousands of tourists to Stone Town — the “old town” district of Zanzibar’s capital — and its 17th-century fort along the main strip.

Now in its 9th year, Sauti Za Busara shows no signs of slowing down. But rumor has it the festival may be moved off Zanzibar next year. Despite the massive tourism $$ involved, local support is dwindling, and the event could be transferred to mainland Tanzania — which to many poses a significant threat to its uniqueness.

Although highly intoxicated skinny dipping is probably not the best example of cultural sensitivity on a conservative Muslim island, one could argue the tourists aren’t totally to blame. Konyagi (booze served in little sachets) is just too damn cheap, the island is too fucking hot, and most of the dancing is really, really, sensual. 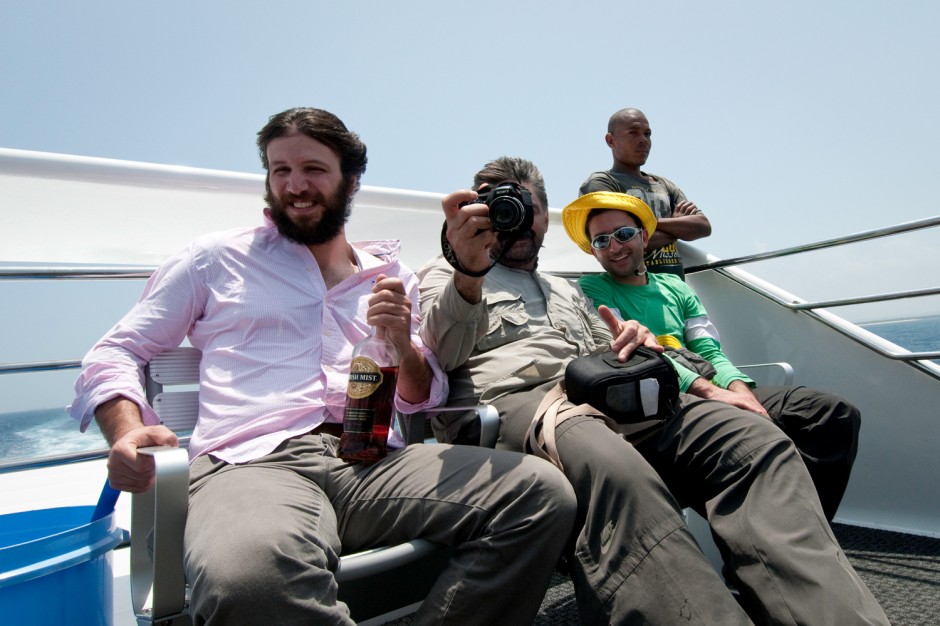 Zanzibar is a two-hour ferry ride from Dar es Salaam, Tanzania. The people on the ferry are a mix of journalists, old Europeans, young backpackers, and Zanzibari families. Within minutes of departure, an animated and bearded group of six Iranians began cracking duty-free bottles from Dubai and passing them around. They were drunk quick, and stayed that way throughout the festival. We all recognized the fact that our respective countries had a reputation for wanting to nuke each other, but we found ourselves partying together nearly every night. Ahmadinejad would've been pissed...but he'd be welcome anyway. 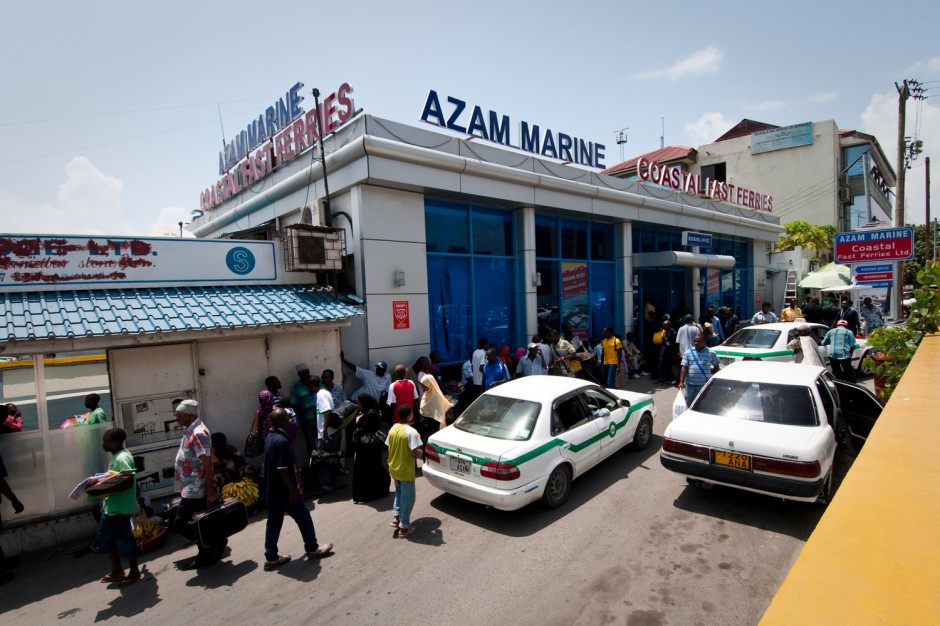 The Zanzibar Ferry terminal in Dar es Salaam: a glimpse of hell amidst the island paradise. Aggressive touts in muslim taqiyah caps, all pushing and pulling at you with different lies, scams, and bargains for the same god damn ferry. As the Albendazole churned in my stomach, slowly killing off the last of the parasites taking up an uncomfortable residence in my intestines after a trip to eastern DRC, I grumpily forced my way to the Azam terminal and boarded the Kilimanjaro II express ferry. 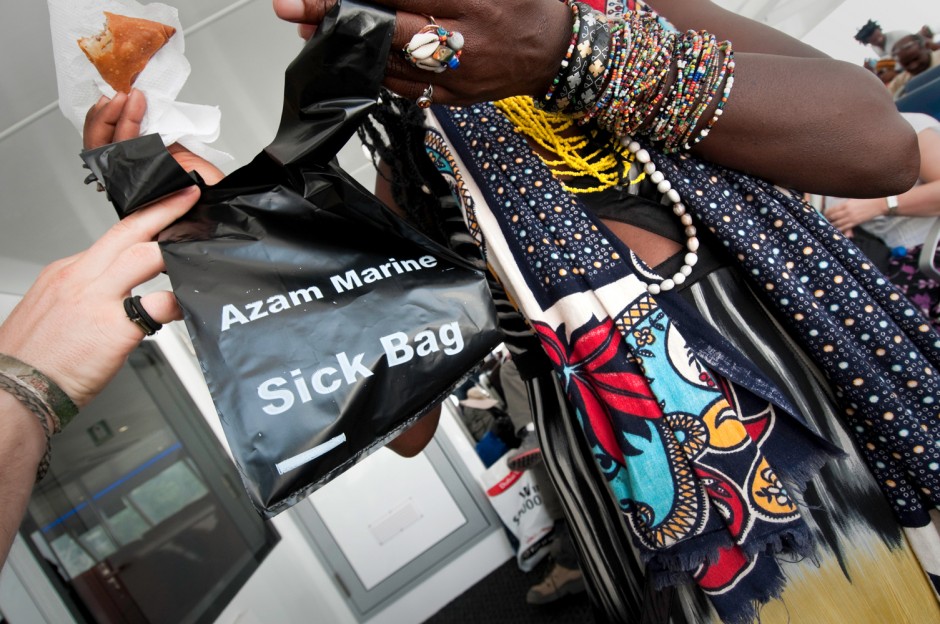 The two-hour ride from Dar es Salaam to Zanzibar (also part of Tanzania, even though they make you go through immigration again), is notorious for rolling seas and the purging of stomachs. Whiskey doesn't help. If you don't throw up, at least get a free carrying bag out of the trip. 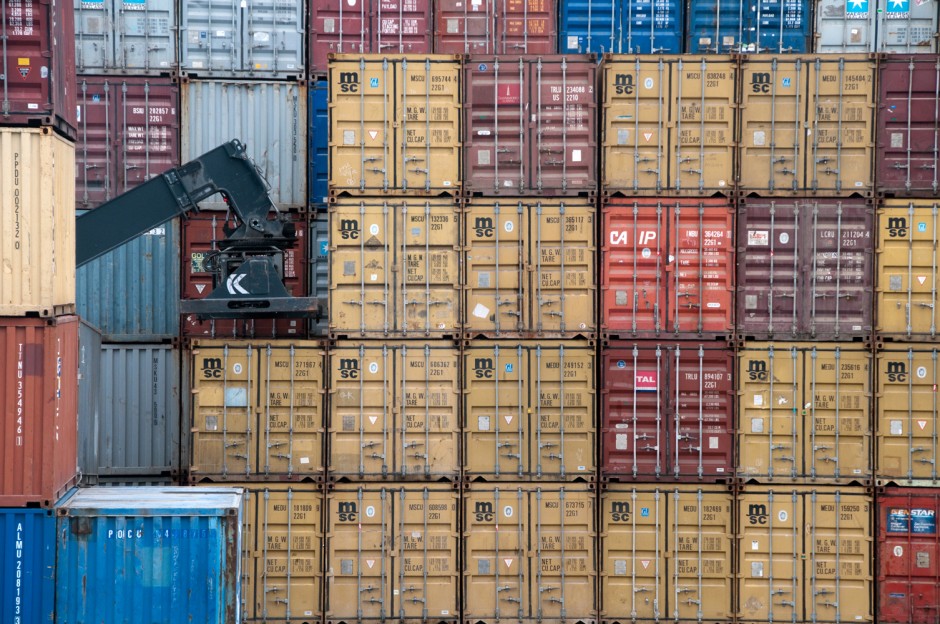 Pulling into Stone Town, Zanzibar's main port, you're reminded of two things. First, the Chinese are taking over Africa. Crates upon crates bearing Chinese script or company names litter the entire point. The second? Holy shit, you're actually on Zanzibar. It's like Timbuktu, or Bora Bora, or Guam--all the places stoners refer to when something is, like, so far away, dude. 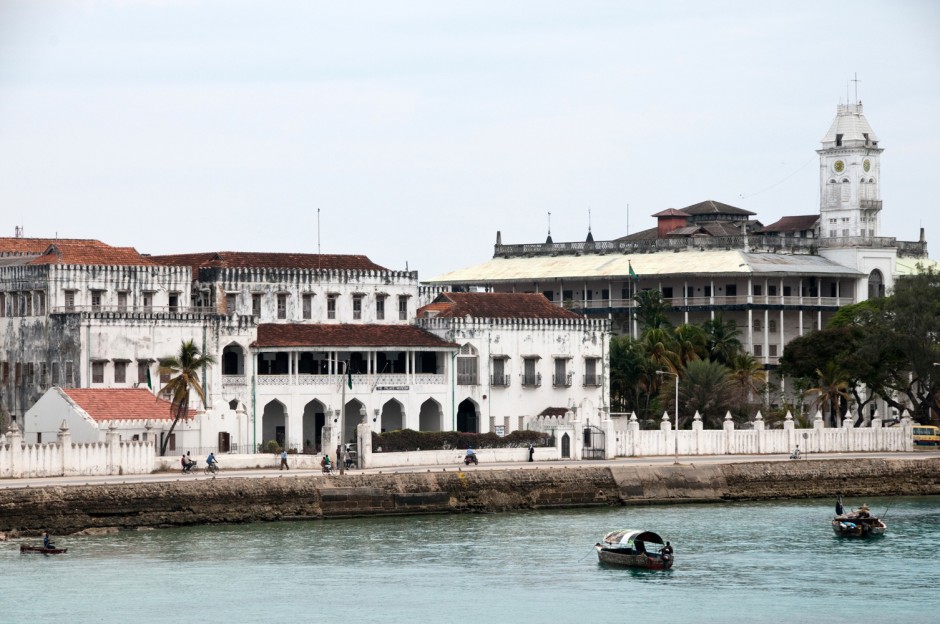 A half-hour drive or less from the kind of beaches pirates used to write home about, Stone Town is a UNESCO World Heritage site for its unique cultural and architectural history. Central to the 19th-century slave trade and spice trade, most of the city was built around the same time, fusing Moorish, Arab, Persian, Indian, and European elements. 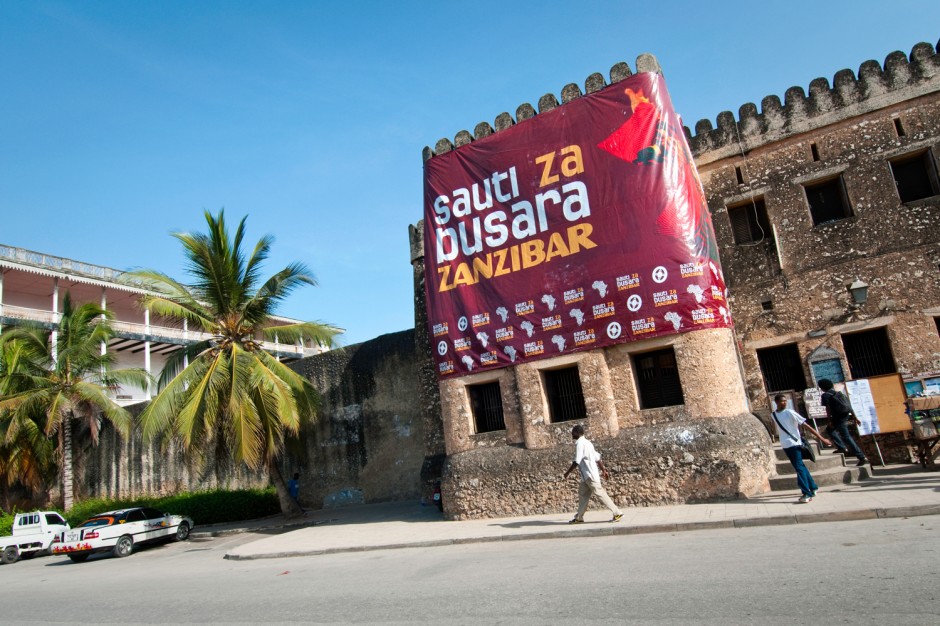 The setting for Sauti Za Busara: the grassy courtyard of a 17th-century stone fortress, used during the rule of the Omanis. Take that, Coachella. 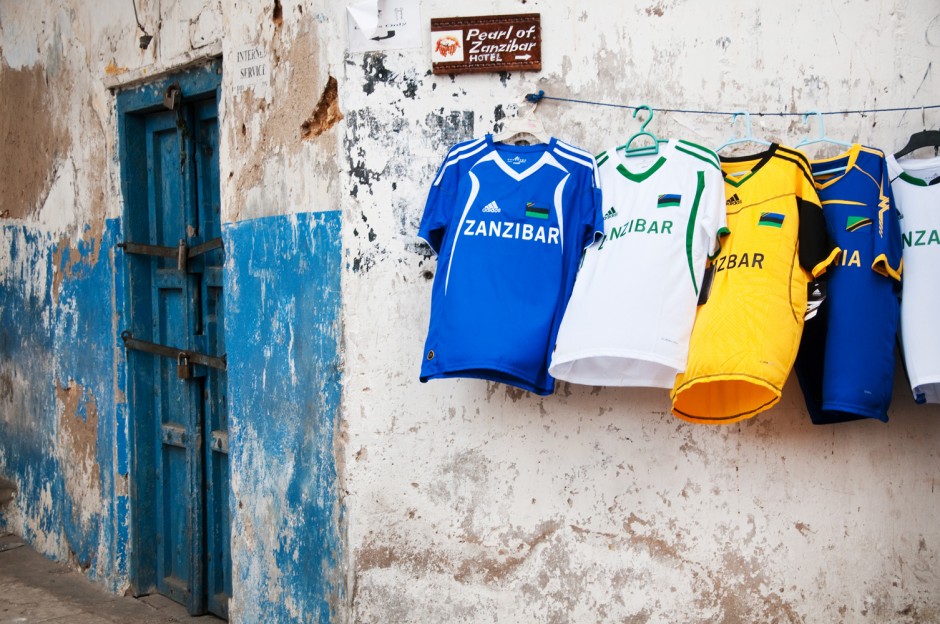 Zanzibar's economy is based almost entirely upon tourism, and at times can become a bit over-hospitable. A "Jambo! Jambo!" greeting meets you at every shop. Three-quarters of the little stores in Stone Town sell the exact same crafts, trinkets, t-shirts, and spices, although if you're here for a short time it's an excellent place to stock up on cheap gifts. The Adventures of Tintin is a favorite around Zanzibar, though I was never eager enough to shell out the $15 for it. 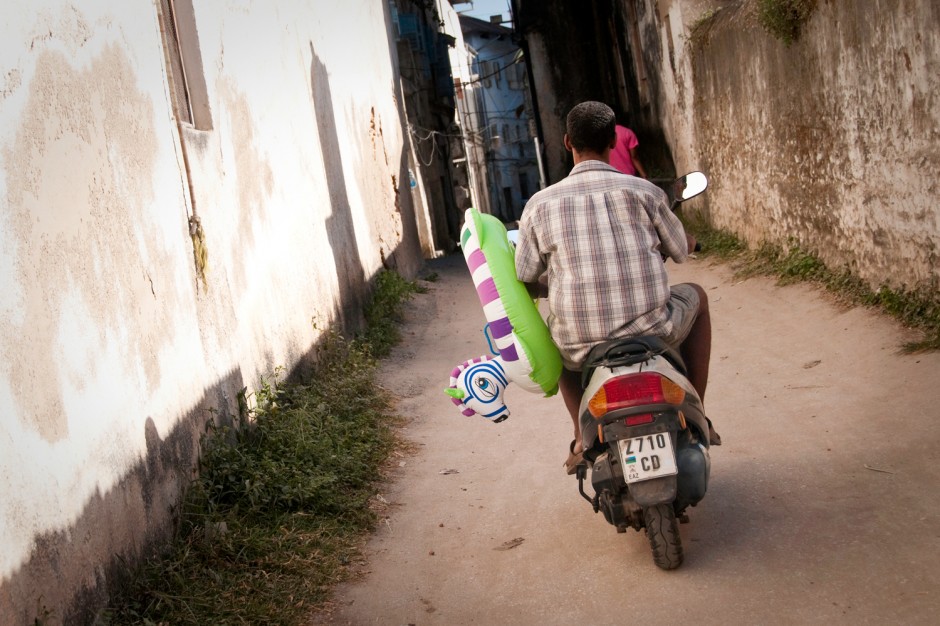 Most of the little alleyways in Stone Town are too small for cars, but scooters and bicycles fly by at breakneck speed. I was inches from getting railed on more than one occasion. The inflatable Zebra...well, I can't really explain. It's a beach town? 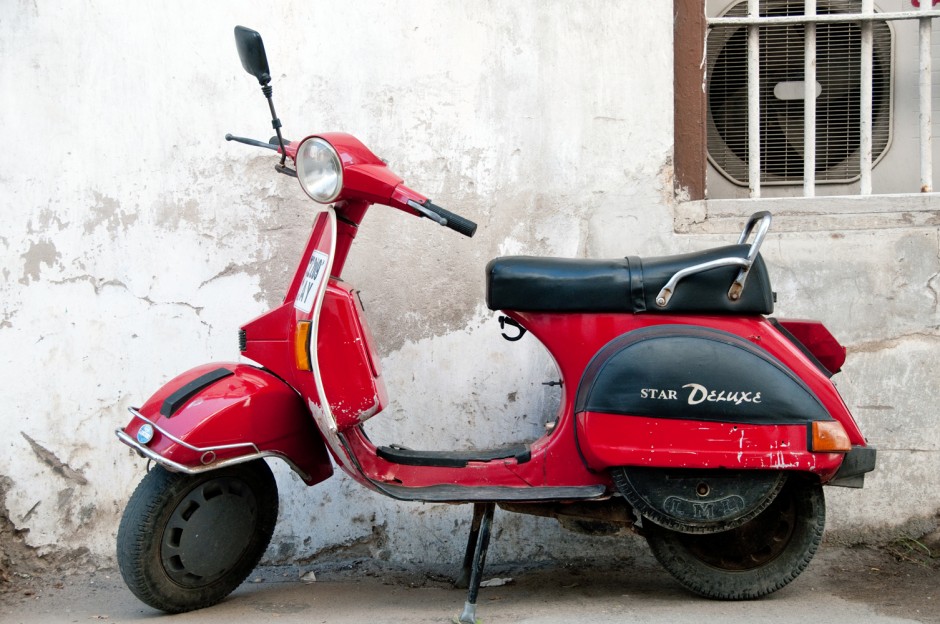 Stationary scooters are the best, and usually pose little danger. The way they casually lean against the decaying walls in an assortment of colors, shapes, and models reminds me of prostitutes in a European red light district. Strike a sexy pose, you little red scooter, you. 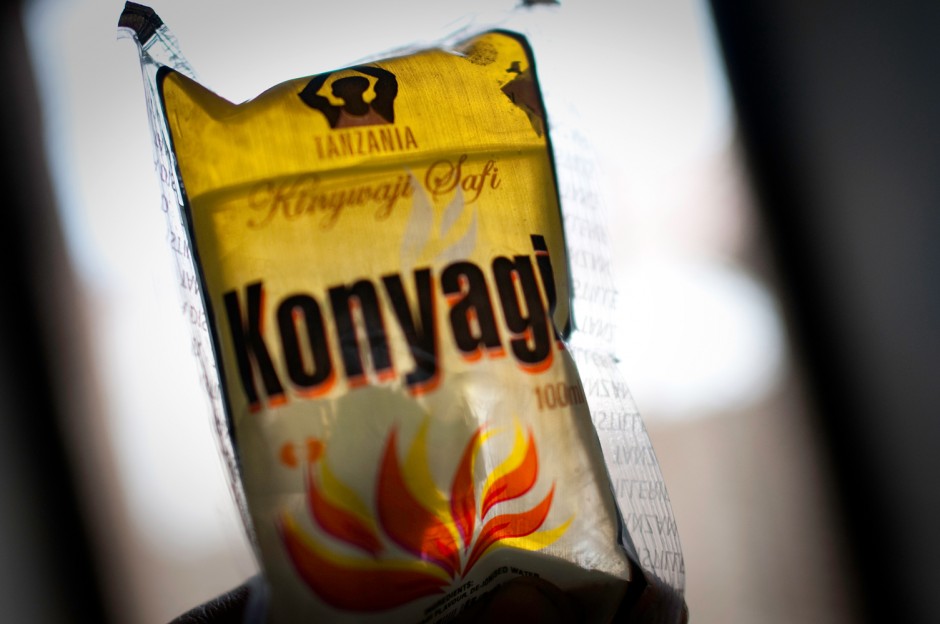 As night sets, it's time to break open the stockpile of drinks...starting with the amazing $1.25 sachets of Konyagi, "Kinywaji Safi" or literally "Clean Drink." Renting a house in Stone Town is pretty easy, and cheap ($15 per person/night). We managed to pack about thirteen people in, without anyone getting cramped. 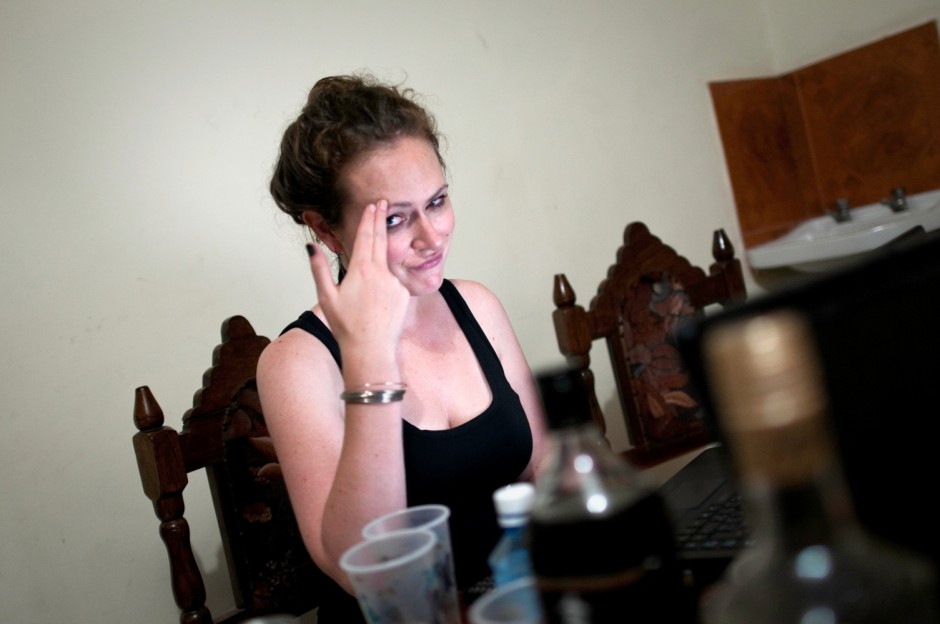 You may remember Paige Aarhus. Here is her "Fuck you, I'm trying to work" face, as everyone else, mostly a media-geared crew, loudly downs a bottle of tequila. It ain't easy working in paradise. 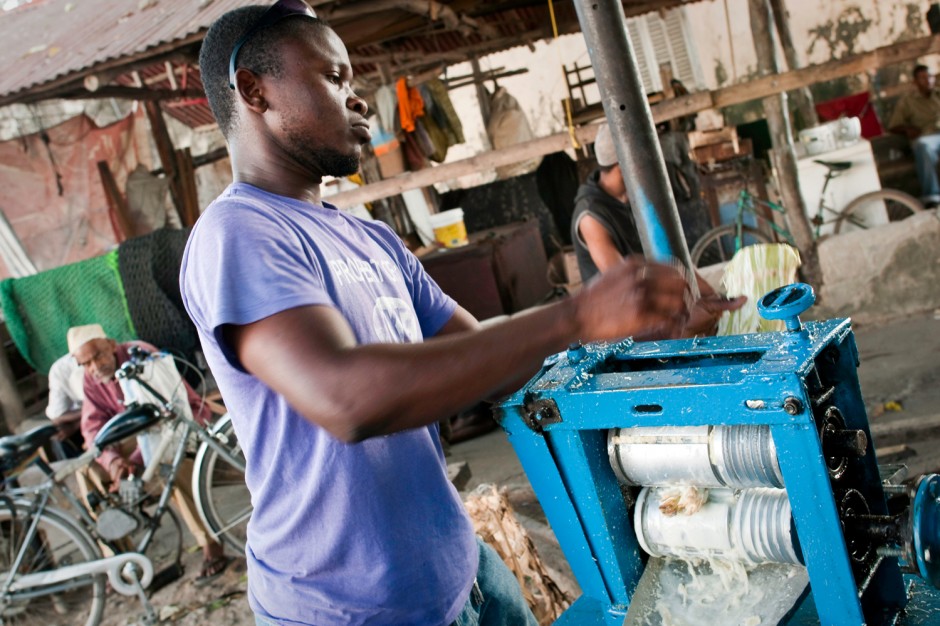 After getting thoroughly sauced up, doing some Konyagi damage, and perhaps--perhaps--emptying a bottle of Cuervo, it's advisable to get some Zanzibari rocket fuel: fresh sugar cane juice with ice and lemon. Add one of those to the mix and you'll be flying high for a while. 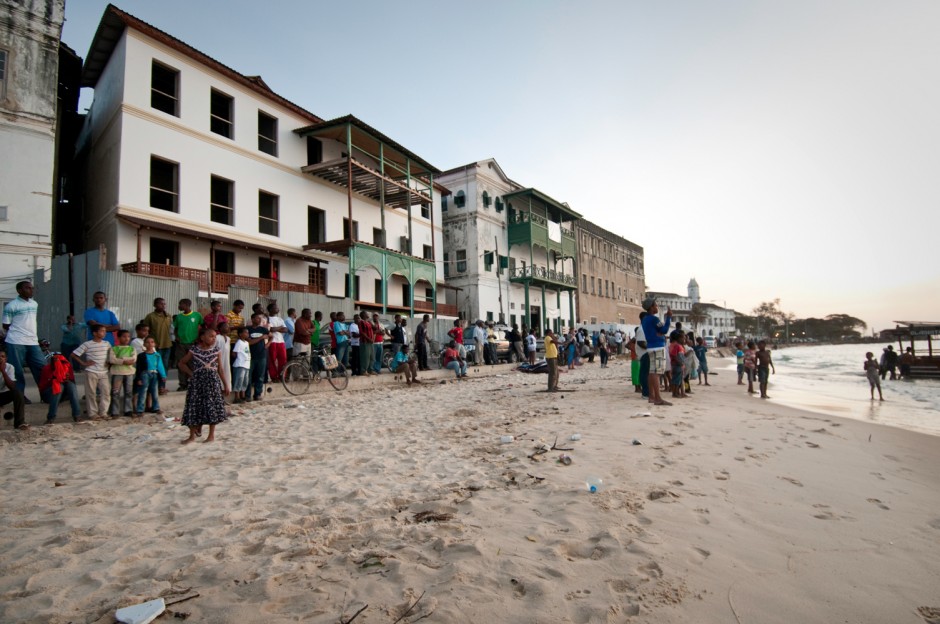 Everything in Stone Town is within walking distance, and as we meandered the few blocks toward the music, we couldn't help but notice half of the town gathered on the beach staring out into the ocean. Hint: they weren't just looking at a nice sunset. 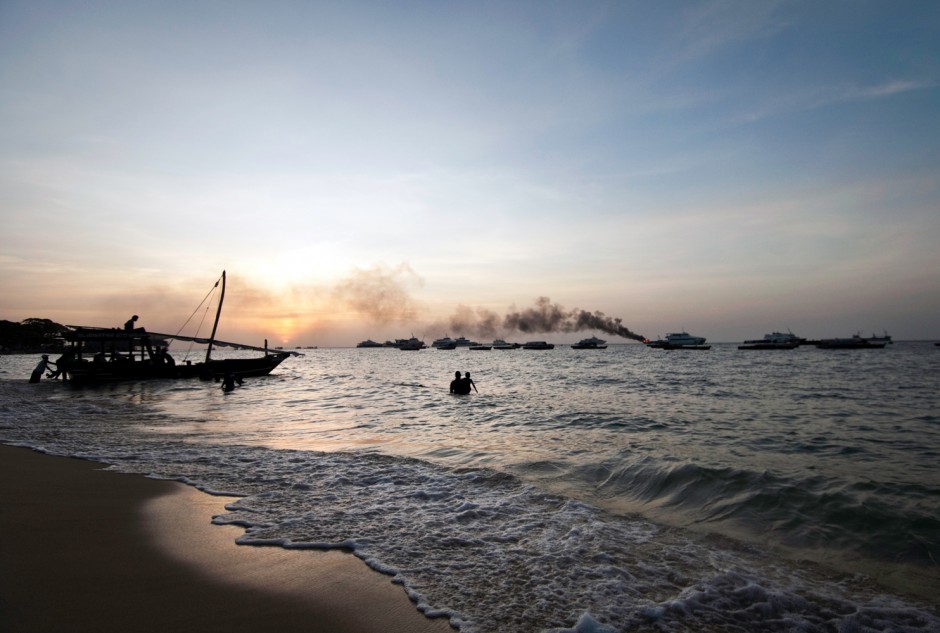 A small barge had exploded and was still engulfed in flames. Free fireworks show? Awesome. No one was hurt...and apparently they just let the ship burn and sink to the ocean floor. It'll be a great new diving spot for tourists in a few years, I think. 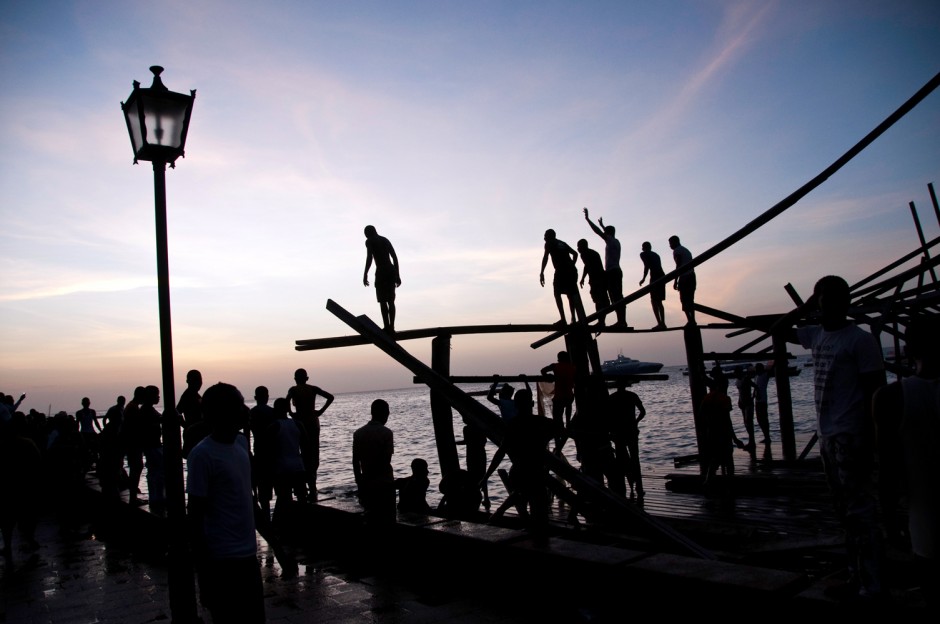 Further up the beach, just in front of the night market and the venue, is a main square where tourists and Zanzibaris alike come down to watch the sunset. Hundreds of young, restless, and bored teenagers, in the absence of bowling alleys or mini-golf, do some pretty impressive stunt diving off the pier. 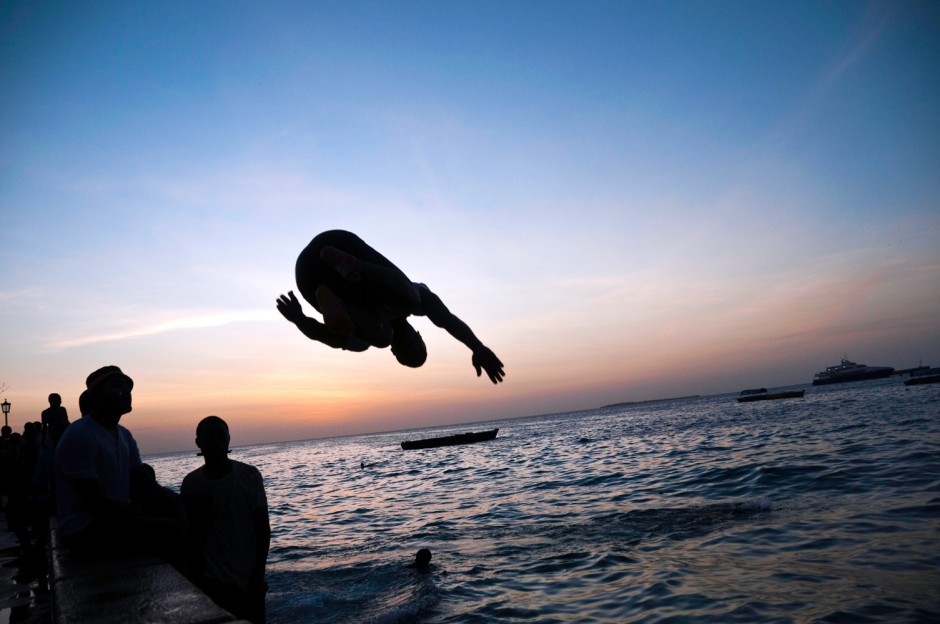 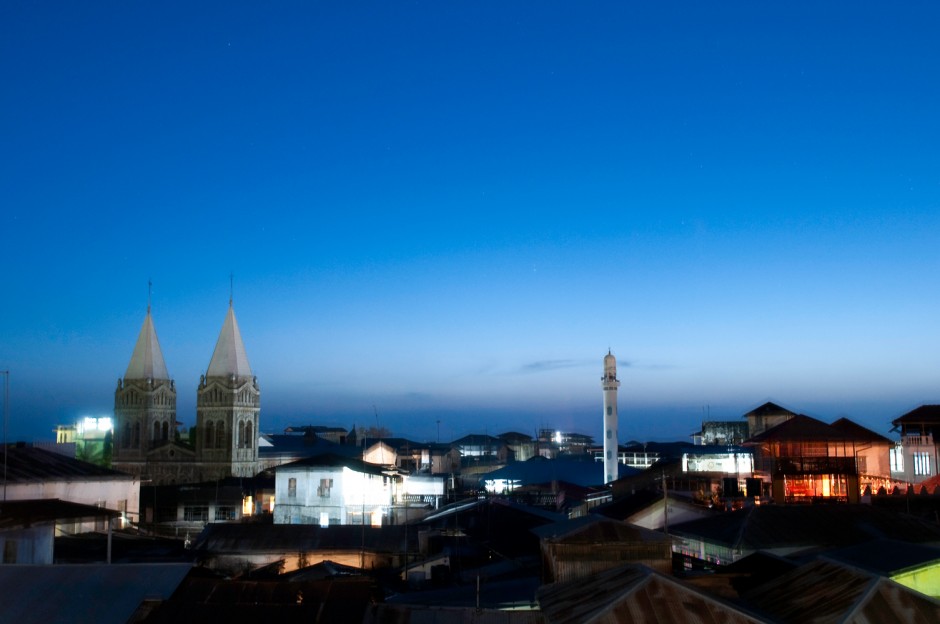 Stone Town is calm at night. From the rooftop bar of the Maru Maru Hotel, you can get an excellent shot of the city at night...if you can hold the camera steady by that point. 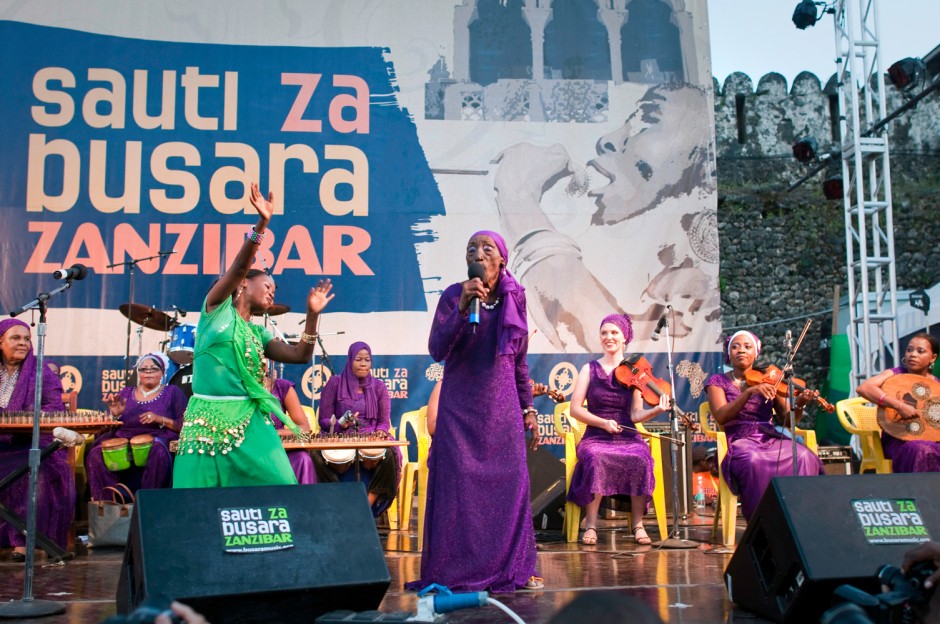 The music usually starts at around 5PM most nights. Bi Kidude, above, is a Zanzibari music legend, and has been playing the festival for years. She began her music career sometime in the 1920s (seriously), and people say she's 100 years old. Then again, they've also been saying that for ten years. Regardless of age, and the fact that she can barely keep her eyes open or move on stage, her voice is still awe-inspiring. 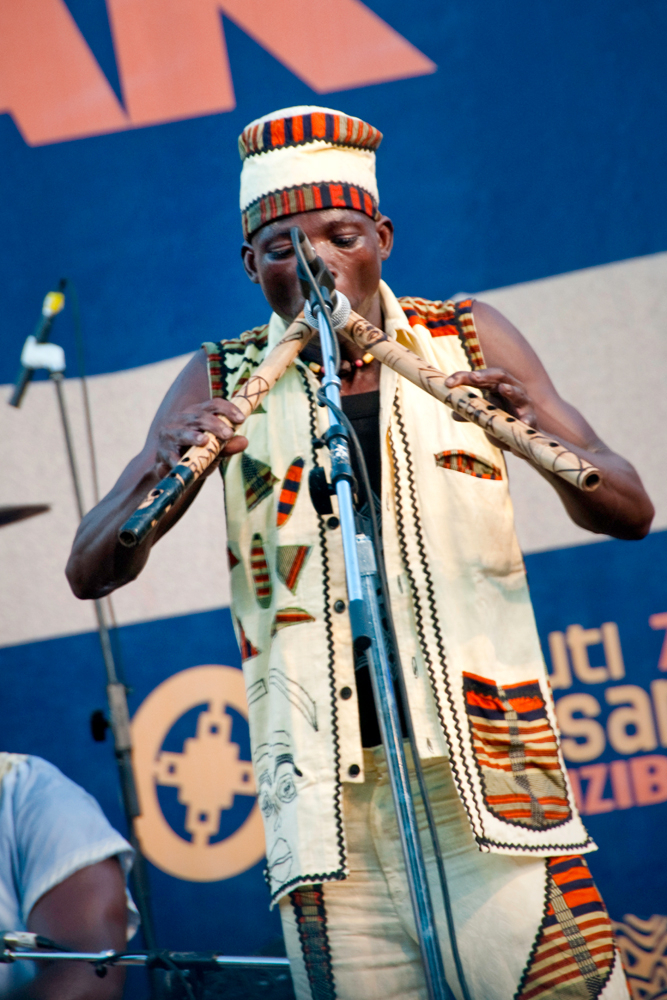 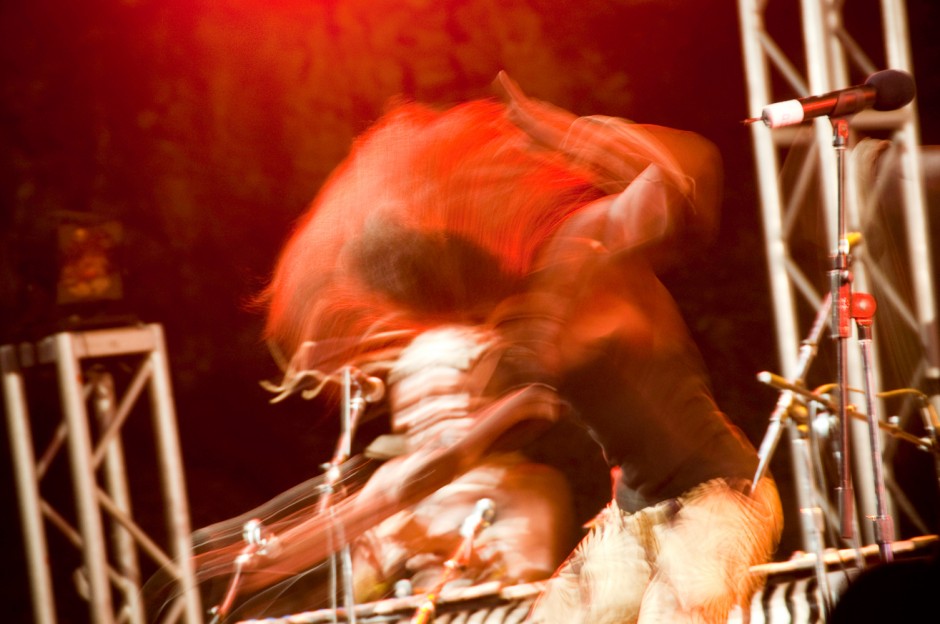 One of the performers from Tanzani's Lumumba Theater Group gets the crowd pumped. 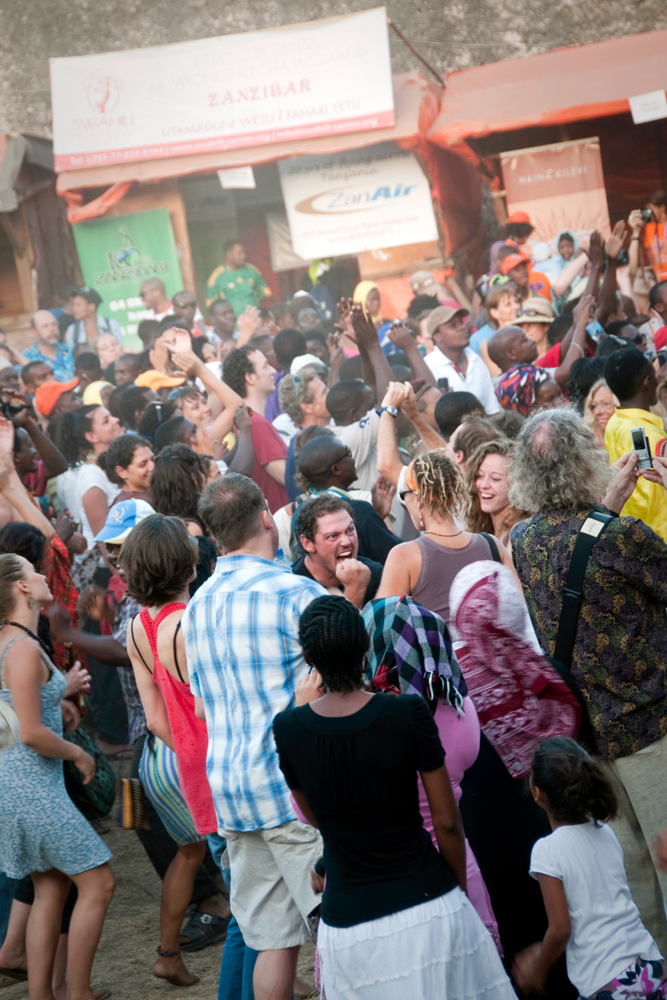 I still can't muster an opinion on how "Swahili" Sauti Za Busara really is. Though it bills itself as "African Music Under African Skies," and features 20 performers from Tanzania/Zanzibar and 20 from across Africa, it’s definitely an exotic tourist trip. Families do come in the early afternoon and stay till sunset, when most of the more traditional music is, and the price for locals is literally a fraction of the foreigners' cost. But when the sun goes down and the drinks pick up, they are pretty quick to leave. The Zanzibari rasta dudes with their foreign girlfriends and those working the event pretty much makes up the late-night local contingent. 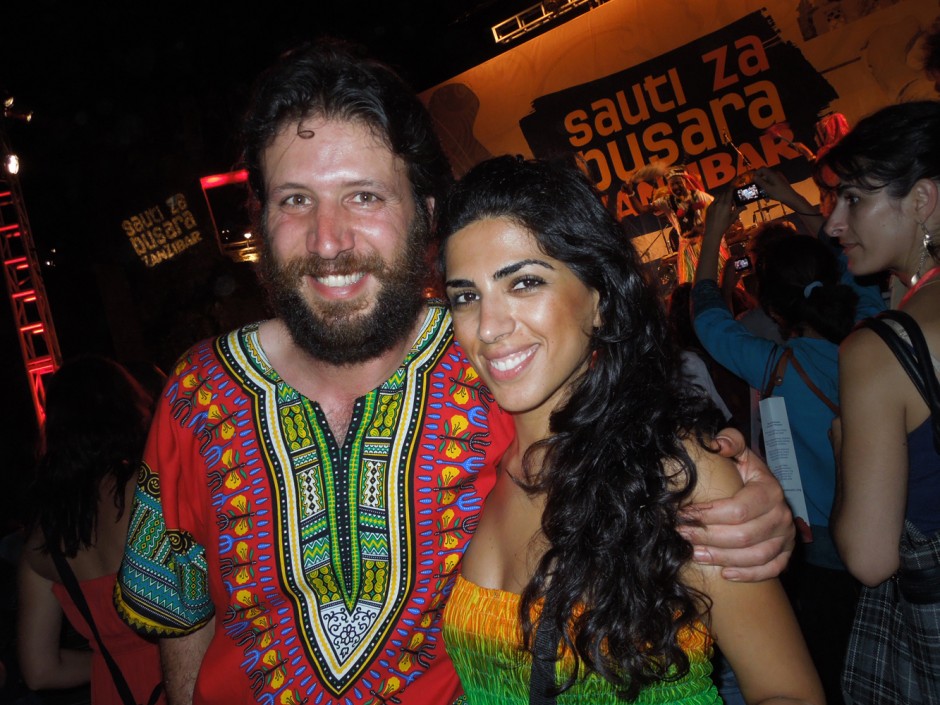 We ran into big-bearded Eddy and the Iranians again, and in true Iranian style they shared roasted watermelon seeds with us for most of the night. In non-Iranian style, we shared a lot of alcohol with them--and eventually a late night skinny dip in the ocean. 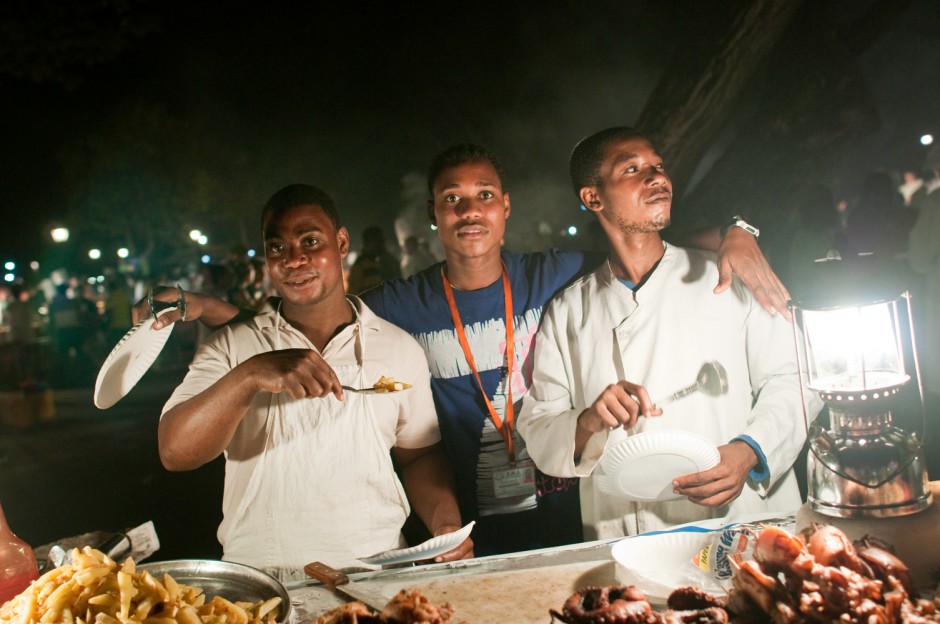 At around 11, when the drunk munchies set in and your stomach needs padding, one of the world's most epic food courts lies just outside the fort. Dozens of stalls selling Zanzibari pizza, fresh calamari, squid, chapati, chips, mishkaki (grilled beef), fried plantains, and anything else you can imagine. Hamisi (left) and his crew took good care of us, and kept us thoroughly filled throughout the weekend. 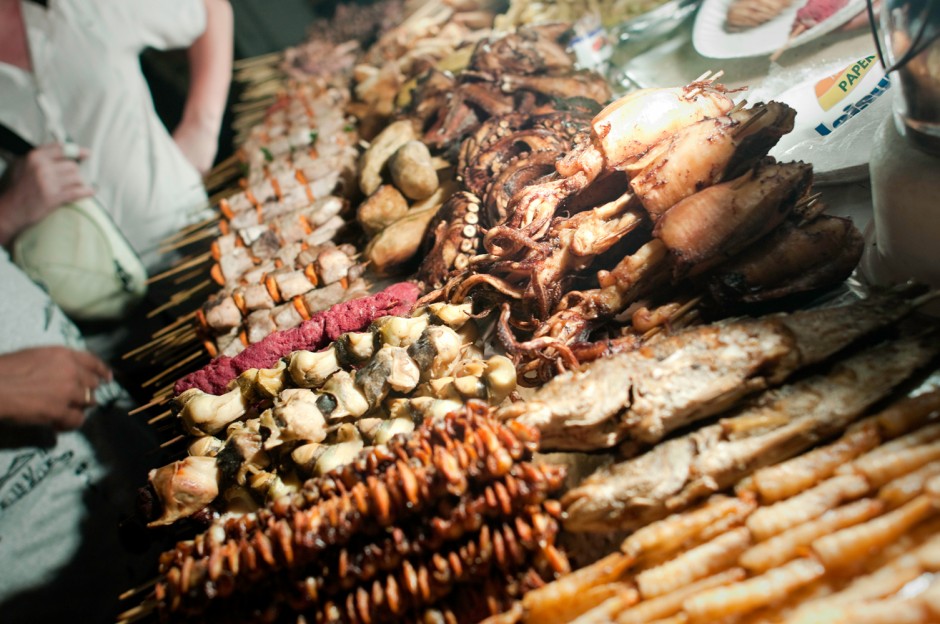 I recommend the calamari kebab... 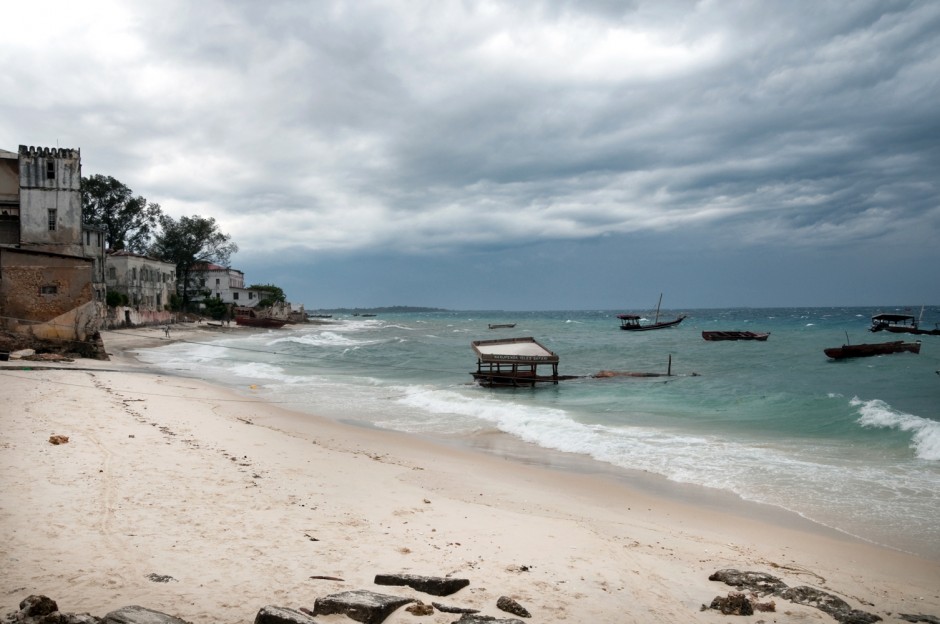 When you wake up at some point the next morning, you'll be thrilled that there are still 3 more days of this. And, again, holy shit: you're in Zanzibar, bro!