THERE ARE A TON OF US around, though I don’t know many personally. I’m based in Nairobi but I’m not an A-lister — like, I don’t work for a wire or a big-name Western news network — and while I’ve seen a handful of ladies at foreign correspondents’ night outs, I don’t hang out with them a lot (they intimidate me).

So I can’t speak on behalf of any foreign female journalists except myself. Nonetheless, I will likely offend both genders and all of my colleagues in writing this. Sweet.

Kenya is still a very much male-dominated country — not in the archetypal “no voting or driving” sense of the word, but women’s lib is just much less of a thing here, especially outside of wealthy and/or expat neighbourhoods. Like, it’s still widely accepted that a woman’s place is in the kitchen, and I am frequently ridiculed by Kenyan men for smoking, drinking, and being unable to cook for myself.

Then there’s the “potentially dangerous job” aspect of the situation. Add on being a noticeable foreigner, which makes you a walking ATM to lowlifes here, and my “easily victimized” triumvirate is complete!

I read the horror stories of female journalists abroad who were sexually harassed, assaulted, raped, and kidnapped — thinking of Lara Logan here — and I shudder. No one wants to be the girl who gets raped, or as one super-sensitive male colleague reflected, “damaged goods.” It’s evil and offensive and fuck that guy, but he definitely hit a nerve there. No one wants to get damaged like that. We don’t even want to talk about it.

Female foreign correspondents know that these risks are very real, in addition to the risk of getting murdered or hurt just for being a journalist without any gender-based influences. I have to seek out sketchy individuals in order to write a lot of my stories. There are always questions of: How far do I want to push it? Which risk is worth taking?

I’ve spent a lot of time in slums and shifty neighbourhoods, interviewed hustlers, victims, thieves, and killers, and travelled solo into regions and countries that people strongly advised me not to. I have taken what could be perceived as risks, and was scared shitless every time I did it. 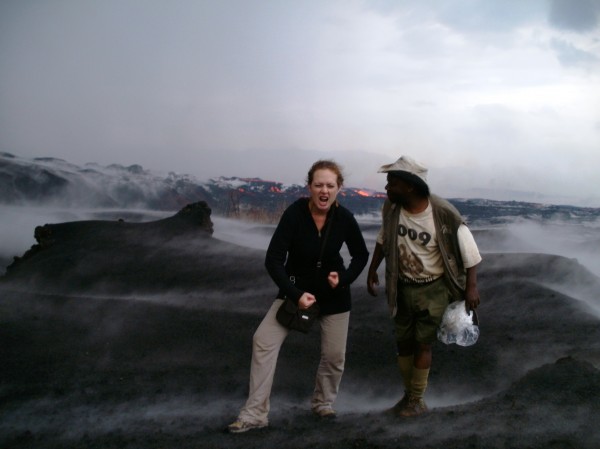 Just recently I spent weeks working on a story about organized crime and how gangsters played a role in Kenya’s 2007-08 post-election violence. After the first couple times out, I had to meet low-level, broke-ass gangsters alone on their home turf in Mwiki, a neighborhood miles outside of the city, which was as fucking nerve-wracking as you might imagine.

But so far, nothing horrible has happened — which I think is due more to luck, fearfulness, and oftentimes (sorry) protective male fixers/colleagues keeping an eye on me. I wish I could say it’s totally possible to do this job without any male help or support, or share some one-size-fits-all formula on how to make it work, but that’s not my reality. For me, getting the job done means a careful balance of operating within existing gender constraints, and ignoring said constraints when necessary.

Oh, ladies aren’t supposed to sit alone in sketchy downtown bars? (Well, unless you’re a hooker.) Fine, but I’m waiting on a contact who I must ply with booze. I need to be in a public place in case he is a scumbag. And no way am I taking a cab all the way to the suburbs to do it. Ignore the glares and keep moving.

I’m waiting on a contact who I must ply with booze…And no way am I taking a cab all the way to the suburbs to do it. Ignore the glares and keep moving.

Any lady in Africa knows that they will face some level of harassment when they’re out and about. Mitigate the risks if you can: I tend to dress like a hobo and wear sunglasses. But when your job involves talking/flattering/seducing (kidding!) sources into giving you what you need to know, this harassment becomes much more of a thing.

I’m sure I could get the information and interviews I need even if I was all stern and severe about dudes who hit on me — but sometimes the best way to keep the conversation alive is to be nice, bat your eyelashes, get the info, then flee the scene or lie your ass off before you’re expected to make good on the small talk. Is that horrible? It seems horrible just written out like that.

Example: In October I found myself on Lamu, an island just south of Somalia where three European tourists had just been kidnapped by pirates. I turned on the ol’ “charm” for the police force and was invited on an overnight pirate patrol as a result — score! Photo ops! Experiential journalism! But then I had to spend the night sleeping on a beach next to six bored male police officers who were my only protection against potential pirate kidnappers.

They couldn’t believe I was actually out there with them. The jokes and clever comments began around 2 a.m. At one point the corporal in charge busted out the whole “I’ve never been kissed by a white lady, can you please give me one kiss?” line, which forced me to invent an elaborate story about my fiancée, who was waiting for me back home and who would murder me if he ever found out I cheated on him. The corporal understood. “I would kill my fiancée too,” he told me. Grrrreat. 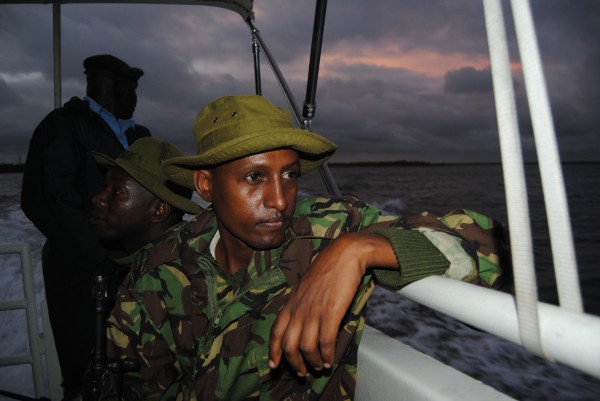 On the lookout for pirates near Lamu, Kenya.

So fear not. Guys might hit on you, but they will almost always back off after a polite (or eventually bitchy) rejection. On top of that, most still have that whole “defend the woman” mentality going on. This means my fixer, many of my sources, and my colleagues — locals and foreigners — are more likely to be protective of me.

I was out with an American colleague at a police canteen one night. We were the only two foreigners there, I was the only white girl there, and it got to the point where one bar-hopper was showing far too much gumption in trying to get me to go home with him. My colleague, who I’d known for about six hours, pulled an Incredible Hulk on the dude (perhaps due more to drunkenness than anything), scared the shit out of everyone, and we eventually escaped unscathed.

I stood by, secretly grateful, then did the “Terrified and Bewilidered Girl says please stop fighting!” thing to prevent anyone from getting stabbed in the face with a bottle. It’s not a very Grrl Power way to operate, but when some creep will not go away, or I’m too tired to carry my own backpack, or just cold and in need of a jacket, it somehow brings out the gentleman in my male companions. It’s hard to say that all gender norms are evil; some of them come in handy, and I really enjoy capitalizing on those that do.

At the end of the day, what matters is whether you got the story written, not what a pain in the ass it was to get there.

I am definitely not saying everything has gone smoothly here. I pretty much only hang out with dudes, and I’m not a “one of the guys” girl — except that now I am.

There is a perception that female foreign correspondents are all total bad-asses who live and work exactly like the boys, no-nonsense. I wish, but man, at least half of my life is completely embroiled in female “nonsense.” I wear makeup, travel heavy due to needing lotion and conditioner at all times, worry that my rugged khakis make me look like a porkchop, cry when a story doesn’t work out, and feel absolutely sick to my stomach when I see how filthy old men treat young, jaded prostitutes around here.

I have to swallow my ladyrage a lot when I’m drinking with male journalists. I’ve been harassed and robbed, missed out on stories, and led down many a wrong road because I’m a girl (or an idiot, perhaps.) Sometimes, I like to blame my setbacks on sexism about as much as I like playing the race card: “It’s because I’m white, isn’t it?”

But you know what? — even if it is true, it’s irrelevant. At the end of the day, what matters is whether you got the story written, not what a pain in the ass it was getting there.

I could get into the shittiness of 20-hour bus rides when you have the world’s worst PMS, or the agonies of attempting a long-distance relationship when you are constantly travelling, boozing, and doing stupid things, or the tendency a lot of us ladies have to say fuck this hot, dangerous, crazy country, I am going home and getting married — but that’s old hat. The job is that much harder when you’re a girl, but waaay more interesting than a kid and a mortgage, so the tradeoff is worth it.

But I am definitely flying back home for the summer on the off chance I will run into my ex. Empowerment!

Tagged
Narrative Kenya
What did you think of this story?
Meh
Good
Awesome