FOLK TO FOLK is an independent documentary project about folk music, the young musicians who play it, and the communities that form around it.

My two cohorts and I started it under the influence of fresh diplomas, existential panic, and a lot of ideas about the American narrative as reflected in its musical traditions, the effect of digital interconnectedness on regional sounds, and the illusion of authenticity.

But, to be honest, we just really liked the warmth we felt singing along to covers of “Wagon Wheel” in crowded living rooms. And we wanted to see America right.

Folk to Folk is a way to showcase some of the amazing folk artists we’d been hearing, and to share the positive energy we found in this awesome scene. Multimedia felt appropriate — we recorded take-away songs and interviewed bands about their relationship with folk music — to let the audience hear the music and the artists tell their story in their own words. 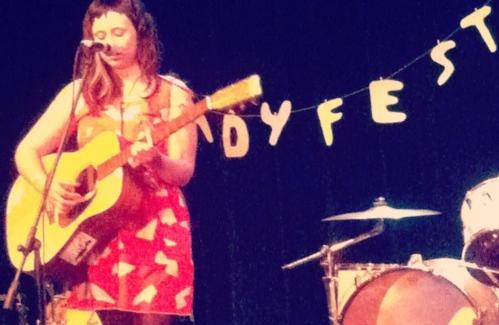 Gracious Calamity talked about participatory culture on the steps of a music and art collective that regularly hosts donation-based all-ages shows.

Sons of an Illustrious Father parked their blue schoolbus outside of our favorite DIY venue and talked about how folk, at its raw and emotional core, isn’t all that different from punk.

Before we knew it, it was October and, as the song would have it, we were running from the cold up in New England. We packed our Toyota Camry up with recording equipment and jars of peanut butter and drove south, stopping in Baltimore, Asheville, Athens, Gainesville, New Orleans, and Richmond. Occupy was popping up all over the country and we visited the local encampment in each town.

Many of the musicians we spoke to echoed the sentiments and the structure of the movement — blurring the divide between the performer and the audience; encouraging inclusivity, community, and a diversity of voices; spreading social consciousness at the level of the people; and using the internet as a means to organize in person.

We talked to Ryan Harvey and Mark Gunnery (of the Riot Folk Collective), the Honeycutters, Uncle Mountain, Yo Soybean, The Wild, Hurray for the Riff Raff, and Lobo Marino. With every band we spoke to, more pieces of the puzzle came together.

When we got back and regrouped, two things quickly became apparent: first, we were more excited about the project than ever, and second, we were completely broke. Making tuna sandwiches using mayo packets swiped from a Subway and eating them in the parking lot off the hood of our Camry was kind of charming while we were on the road, but scrappiness only gets you so far.

Musicians get paid (some, never enough) for gigs, and filmmakers, well, we fundraise. We just launched our first-ever Kickstarter campaign to get this off the ground, do another tour (Northwest, this time) to fill in some gaps, and put a documentary short together. We’ve been reaching out to our communities, and since Matadorians are some of my favorite folk, I’m sharing it here. Take a look, and if you see what you like, please donate if you can, or share it with anyone you know who might be interested.

Donations are always appreciated but getting word out is priceless, so check out some of these amazing musicians, and say hi if we roll through your town!