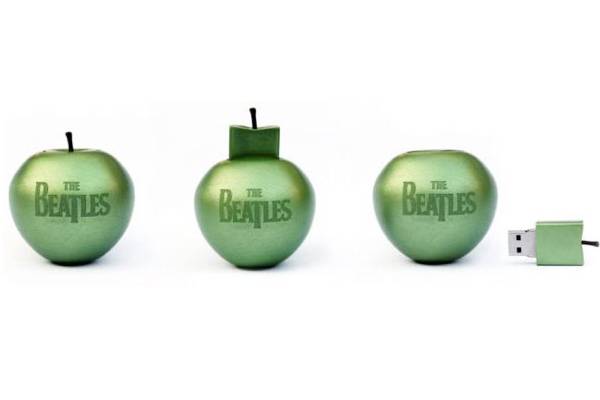 The Beatles’ remastered catalogue will be available on a digital USB stick just in time for Christmas.

EMI AND APPLE Corps Ltd have announced the upcoming release of The Beatles digital USB. The device is another strong uppercut to the other Apple, who have yet to land the band’s titles on iTunes. “[Jobs] says that a download is worth 99 cents, and we disagree,” said George Harrison’s son Dhani in an interview with Blender last Spring.

Music retailer Bluebeat has been selling $.25 Beatles track downloads but, as reported in the LA Times this week, EMI has filed copyright infringement charges against that company. It appears that they forgot to ask permission to put the tracks up.

The $279 USB is shaped in the form of an apple (shocker) and contains 14 stereo titles, as well as all of the re-mastered CDs’ visual elements, including 13 mini-documentary films about the studio albums, replicated original UK album art, rare photos and expanded liner notes.

Only 30,000 copies of the USB will be released. It drops December 8th and is available for pre-order at The Beatles’ store.

Check out our recent free download picks from We Make It Good and Atlas Sound.