1. GET UP AT 5 am. Ease open the lock on your cupboard and stuff your purse full of the only socks and scarves you own. Leave the key on the counter and walk through the black-morning streets. Think about how Genti said this city was best at 4am—a different place without the cars, all smooth and still; think about how you’re an hour off but how he’s right.

Meet Robo at the bus stop, which isn’t a bus stop but a street corner with two wheezing vehicles, bumpers touching like a kiss. Drink an espresso and still fall asleep before the bus leaves.

2. Wake up when your ears start popping, look out the window and see only mist—a kind of apocalyptic mist that’s mixed with pollution so you don’t know which is which—mist and trash and dogs sleeping in the median by the border control. Think of “The Road.” Hand the man your passport, remark how you thought you’d be the only navy one; have Robo reply, “The others are former Yugoslavia passports.”

It’s easy when the man comes back on the bus—he calls the names of everyone, groggy hands reclaiming documents—but for you, he just hands it over, doesn’t even look up.

3. Stop at the cafe, squat toilet, and sensor towel dispenser. Eat a salad for a Euro, wrap the hunk of bread in napkins and tuck it in your purse. Robo goes across the road to the market, comes back with a bottle wrapped in newspaper and a plastic bag, “Like in America,” he says and laughs and drinks.

4. Fiddle-rock and Turkish pop, Kosovo countryside through the window: tire-less cars on the roof, pile of trash burning and man warms his hands, leans his ear into a cell phone.

5. Arrive at the Pristina bus station. Jay-walk across the overpass and remark how cars actually stop for you. See a Bill Clinton statue, see Yankee flag and American knock-off products everywhere: American Hot Dog, American Doughnut, American Cola. Say: “They must be the last country left on Earth that likes us.”

6. Go to Tingle Tangle, a hipster coffee shop that could be in Brooklyn or SF, except everyone’s smoking, smoking, inside and out, and a 10-year-old walks by, box full of cigarettes and you shake your head no. Sit in the sun and order a cappuccino, which you find out is a mocha, and look at the macchiato Bledi orders and say, “That’s a cappuccino,” and he says, “No, it’s a macchiato.” 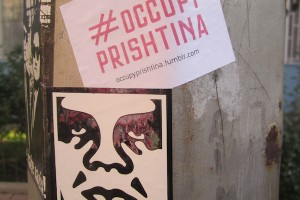 The kids are different here, in Kosovo, where you’ve come for a music festival called Cow Fest, or something like that. They speak Albanian, but a different type of Albanian, more slang, they tell you, looser and more wild.

The kids look more European or American or something—hip in the way we like to be hip, sweaters and beards and slept-on hair—less like Tirana, where most of the kids are trying so hard to look Western they just fail—an approximation based on music videos and bad Hollywood movies, a haughty snootiness the girls assume, cheap shoes and too-much make-up, in the face of that failure.

Say something about this, and they tell you, “Yes, yes”—how Kosovo’s been more connected to the Western world, how in Yugoslavia they could travel while Albania was on lock-down, how the music scene is better here but how the city’s smaller, less dynamic.

Nod and drink your fake cappuccino. See an “Occupy Pristina” sticker, and open your purse, your notebook, dig out one of the Obey stickers Greg gave you, metal drawer full. Peel off the back and put it up. Wonder if anyone will know what it means. Take a picture.

7. Take a taxi to the one cheap guesthouse in town, share it with Gredy, who’s got a half-melted face and you don’t ask why—with Mardi and Marin, who you remember from last year and who remember you too. Reception smells like stale smoke in the underground, and the cupboard’s got tea cups and condoms, and the staticy TV has an “I Rome or Berlin, wants to play the guitar, wants to meet a nice girl.

But first he wants a hamburger, so we go to Route 66, an American style diner with the requisite Monroe/Dean/Elvis pictures, and a Mexican section on the laminated menu. Shake your head and order the sorriest, soggiest salad you’ve seen all trip. 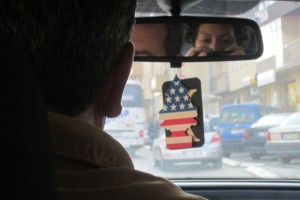 9. Walk the town, the cold hurts: back to Tingle Tangle, over to the opening of a photography exhibit where they play Son House and you laugh. Some other smoky bar, always a smoky bar, and, no, you still don’t want a drink. Clear liquid in short glasses, a kind of grappa, and you feel like you’re in the way. Walk again, and the cold still hurts.

10. Go back to Oda, wait for the first band. Proceeds from the festival go to purchase cows for local farmers in need, and you ask how much a cow costs—”500 Euros.” Figure out your entrance bought 1% of a cow. Try to figure out how many people there are, how many cows you’ve bought so far. “It was bigger last year.”

Marin’s bummed cause the DJ he wanted to see has canceled, and Robo stands in the back, and the first band sucks, a jazzy quartet with a hip-hop-style MC.

Go for another walk, the cold colder—buy chestnuts and sit at a table in the mall, shedding shells, and tell Robo your writing dilemma and ask for advice. It’s slurry now, but solid. Nod and know what you have to do.

11. There’s a fleet of teenagers back at Oda, and the floor is sticky and a punk band is playing and they’re decent, despite shotty vocal levels. Nod and watch the limbs of a mini-pit thrash, silhouette against the stage lights, not too unlike home. You’ll decide later it was the best band of the night.

The next band “is real shit”—girl with dreads pinned into a bun, scatting while the band jams, but no real set, no real songs—so you sit against the back wall with your knees to your chest, which reminds you of being a teenager. They’ve only raised a cow and a half so far, “Last year it was seven.”

And they say how the show wasn’t promoted this year, how everyone was fighting, how another band canceled last minute—how still, the scene is better than in Tirana, where they’ve nearly stopped having shows, where it’s all cover bands—”We lost our best guitarist to Pristina!” Marin exclaims as he grabs Bledi’s cheeks.

Decide it’s still decent enough to rock to, and nod your head, even though you’re sitting in the back and you’re tired, which is how you rock anyway these days—”Granny style,” you tell Robo and laugh, as he takes another swig from his plastic-bag bottle, America-style.

Editor’s note: This is a reprint from Lauren Quinn’s blog Lonely Girl Travels.