The Baltimore-based band Future Islands created a genre of music called post-Wave. This is one band you should pay attention to.

BACK IN MOREHEAD CITY, on the North Carolina coast, I knew Future Islands singer Sam Herring as the younger brother of my friend Joel. Keyboardist Gerrit Welmers was the quiet kid who had a crush on my sister. Joel had a band called Method of Attack. They played house parties and I’d help carry equipment like a roadie.

So I went up to Amsterdam with a sense of entitlement — the friend of big brother — expecting to interview the guys and have fun doing it. They were on their fourth European tour, promoting the album In Evening Air.

We did the interview in their suite at the Lloyd Hotel, in the Eastern Docklands area. Upon entering the floor-to-ceiling cedar room, I had the impression of being inside an industrial-sized sauna. Along the back wall was a 25-foot-wide bed fitted with white comforters.

I said something like “we should all slip under the covers to do the interview,” but there was a Dutch photographer in the room, creeping around and climbing on top of furniture. “Act natural,” he’d whisper. Click!

There was an edgy vibration building in the room that I could not place my finger on. The longer I stayed, the heavier it got. At the time, I chalked it up to adrenaline come-down from the performance, and that could have been part of it. But looking back, I think maybe on a certain level I was feeling guilty.

See, back when they were in high school, Gerrit and my sister used to IM each other, and sometimes, when I was home from college, my sister would forget to log off and a message would pop up, and I’d impersonate her — leading Gerrit on, indulging him for a bit before typing the meanest things I could think of to break his heart. Call it protective brother syndrome, or good ol’ fashioned meanness, but it sort of became a thing.

While sitting across from Gerrit, I didn’t think that he’d forgotten about it. But how does one broach the subject during a band interview? “So Gerrit, remember when you told me things under false pretenses and I twisted your words against you? What was that like?”

[Matador] What is the thesis for this tour?

William Cashion (bass, guitar): You show me yours, I’ll show you mine.

Sam Herring (vocals): That’s the only one, I think.

Gerrit: I think that happened a couple days ago.

You have a marker in your pocket. What do you write on the bathroom wall?

Maybe someone will come along after that and write “tits” under “sucks.”

I read that you’re a fan of Jack Gilbert. What’s your favorite poem of his?

Sam: The first one that caught me really hard is called “Finding Something.” It goes, “I say moon is tempered horses in the dark because moon is the closest I can come to it. I sit in a via, the king’s telegrapher built on the hill where the ferry crosses…” I can’t remember, but it ends with “the arches of your feet…the fields where my heart is as delicate as crushed birds.”

Sam: Yea, but he doesn’t say delicate. There’s another one that says, “I ask of the gods grant me three wishes,” and he doesn’t wish for immortality or fame. He asks for those memories of home from Pittsburgh. The second one is this Algerian girl he had met once, and they had lost their virginity to each other when he was visiting Europe for the first time when he was 19. The last one he says I just want to live and feel the pain. They say, “We can make you immortal,” and he just says I want to live so I can feel this.

When you’re onstage, are you exposing yourself to God? 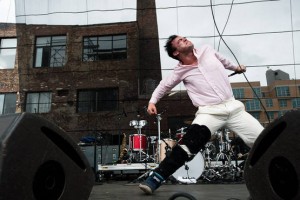 Sam: That’s a whole other type of question. I don’t know, I wouldn’t say that I’m exposing myself to God. I don’t think about God when I’m onstage. Although, I did just recently start doing the crucifix, one of these motions [traces the shape of a cross in the air].

Sam: Yea, the up, down, left, right [laughs]. But just as an idea of faith and mortality. I don’t want to be blasphemous in print. The idea of the stage is power, and a lot of pop icons become [air quotes] gods because of the power of the stage, and the audience, and just wooing people into something. The stage is all about power and I definitely try to engage that, and inhabit that power as much as possible and use it to my advantage.

Where do you see In Evening Air taking you?

Sam: That’s a good answer. We want to make something of our music and keep growing, so In Evening Air is perfect for where we are right now. The whole idea is moving. Like “what the fuck is the next track going to be?” That’s definitely the biggest thing for me, because In Evening Air is the vehicle that helped to us broaden an audience and really put together something we were really proud of.

William: I think Wave Like Home is also like a vehicle that moved us to the point where we made In Evening Air. It’s not like we were thinking “this is going to take us to what’s next.” Everything we’ve made from 2003 on has been like walking up the stairs. Moving and progressing. After the fact, we can talk about it as a conscious decision that we made, but when we were working together it just kind of came out of us working together and building up experience.

I remember seeing you guys in Greenville [North Carolina]. There were white suits, big sideburns. It’s a different show now.

Sam: The music when we started was just fun. And it still is fun, but we take it a lot more seriously. When we were doing it, we were doing it because everything was fresh and new and we were having a good time and we were causing a scene because, we were in college and it was fun. But after five years of doing that and putting a lot of work into it and going through those feelings of what you want to do with your life and what you think you want to do, or what you love, or what you love to do, and what you think you could see yourself doing at all for any period of time. I think we all decided we wanted it to be music. We look very deeply into our past, and what we’ve done.

How big an influence was your family on your music?

Sam: My brother was huge. I never understood his music when I was a kid. He was three and a half years older than me, and I just didn’t understand a lot of it. I liked to listen to oldies with my mom. Although my brother liked that stuff too, I remember when we were younger he got into stuff that I didn’t understand. The CDs I really remember were, of course, Jane’s Addiction. I always remember this Helmet CD. I remember an old Ben Harper CD that I actually kind of liked. It’s the one where his face is coming out like a flame or something. [Wild Man, the band’s shirtless, tattooed roadie clicks his tongue.]

William: He’s giving you the look!

Sam: I’m serious dude, this is the truth. The only stuff I really liked that he had was Danzig and Primus. That’s what I listened to when I was a kid, but then he turned me on to hip-hop when I was 13 and that changed my life. That’s when I fell in love with music — I mean, I fell in love with hip-hop music — the roots of it, where it came from and what it was about. It was funny because I was just a kid growing up in North Carolina in the suburbs. Yea, my dad always made fun of me.

Joel was doing performance and music, and he was the one that got me into writing because he started writing when he went off to college, and brought that shit home, he was doing freestyle rapping and I got into that. So when I got into college I wanted to make music and I started making music with William.

You guys formed in Greenville, NC, which is sort of a barbecue mecca. How badly do you miss Bee’s Barbecue?

William: Well, of course, I think we all miss it. I never really went to it though when we lived in Greenville, but I’ve been there since we’ve graduated.

Sam: How badly do you miss Boss Hogg’s?

William: Ah, Boss Hogg’s. I wish it was still open in Greenville. I’d go there. Bee’s is amazing.

Sam: Bee’s is hard to get to sometimes.

William: Bee’s is so exclusive.

William: Regional Barbecue. That’s the name of the new band.

Sam: All of us are going to tour together with our solo projects.

William: That’s what we’re going to do. There’ll be a year where we don’t make a Future Islands record. We’ll just go on tour with all of our solo projects together so nothing changes at all.

Future Islands are on tour in Europe promoting their latest album On the Water.

Tagged
Interviews
What did you think of this story?
Meh
Good
Awesome

Travel is not a white boys’ club (and never has been)

An interview with Mary Sojourner on her novel 29

Is this the next generation of travel search engines?

Tips from the pros: Best apps for your Instagram travel photos

The man who cycled the world

The seriously huge assumption that affects the voice of travel