Jakarta’s north is where the city’s colonial past rubs shoulders with its less-than-reputable present. Away from the ultra-modern mega-malls, leftover Dutch architecture pokes a decaying head from between the one-stop debauchery shops selling skin and drugs under the guise of hotels, nightclubs, and spas. If there was ever an appropriate place to eat a deadly snake, this would be it.

Along the streets in a too-casual-for-comfort manner, small cages of blue plywood and chicken wire are all that separate pedestrians from the hissing black cobras. Diners sit next to the cages as if the animals were tanked lobsters in a Maine seafood shack.

While the streets are littered with small satay stands, it’s the King Cobra Mangga Besar restaurant that’s cultivated a reputation as the best place to eat one of the reptiles. The family-run shop opened in 1965 and has since hatched four additional king cobra restaurants in the city, with a fifth on the way.

In more than a year of working as a journalist in Jakarta, a trip to the restaurant has always felt like a terrifying inevitability. My phobia of snakes is primal and buried in the most basic part of my brain. They chase me in my nightmares and, for reasons I can’t explain, this makes me need to be close to them.

I step into the tight 10-table establishment. The grill is working overtime. White smoke has completely filled the dining room, and it’s difficult for my eyes to scan the tiled floor for escaped hors d’oeuvres.

Maria, the long-time owner, obviously has a routine when it comes to curious white people walking into her restaurant holding cameras. She barks some words in Bahasa to her daughter Olvin, who shows me towards the back room where the snakes are kept. 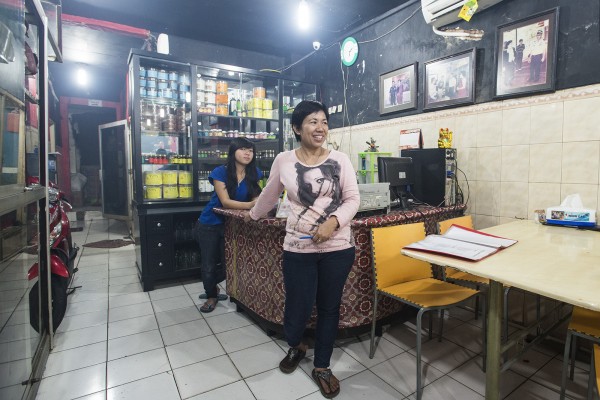 A glass partition separates the caged animals from the main eatery. Olvin’s already stepped through the swinging door, and I can feel every cell in my body pulling me towards the exit. I take a deep breath and exhale in time with my step into the snake room.

Olvin, along with the only non-family employee, begins to pull out various serpents. Some are emerald with narrow, pointed heads; others are the splotched shades of army fatigues. The two smile madly as they spread reptile after reptile the distance of their arms and hold deadly heads closer to my lens than I’d prefer.

My hands are shaking like mad. Adrenaline is thumping in my ears, and I’m doing my best to pretend like this is just another day. Inches to my right I can hear the black cobras spitting at me on the other side of a single pane of glass. It slowly dawns on me that these two are risking their lives, and I have no intention of eating what they have on display. I make a mental note to buy one of the other snake-derived products they sell in the front of the house as a thank you for their risk.

The only snakes that don’t come out of their cages are the kings. According to Maria, they’re just too dangerous to take out for fun. She says the only people who regularly fork over the roughly $250 for them are Chinese businessmen who come to Jakarta on short stays for work. 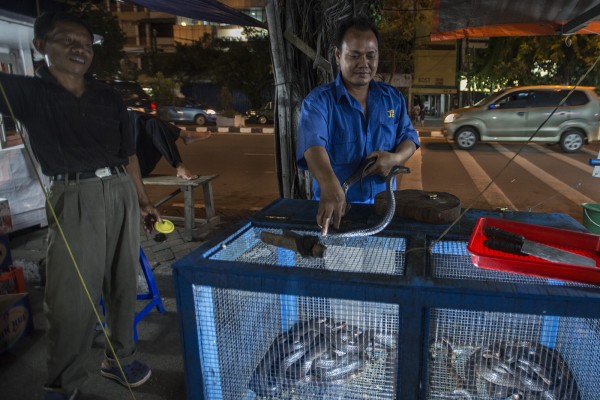 Looking at the pent animals, I’m okay with letting them sit. One particularly worrisome fellow is deathly still, head tilted back with his eyes fixed on the one place a hand must go in if he’s to go out.

Maria says they’ve been doing business with the same snake catchers for years. Only when her daughter was first learning to handle the poisonous serpents did she fear for her family’s well-being. Bites are rare, but when they happen the skin is cut at the point of contact and as much blood as possible is drained from the area.

One small factoid about the restaurant pushes me to my emotional breaking point. Since 1965 only one king cobra’s ever escaped. It made it to the center of the eatery before staff grabbed hold and returned it to a cage. Taking a look at the wire enclosures, it’s not a sense of security that comes over me but the dreaded realization that they’re long overdue for another such incident. I immediately have a vision of myself covered in escaped serpents who know my position on the top of the food chain is at best conditional.

My reaction is Olympic-gold swift. I grab a snake-skin wallet as a thank you for amusing my phobias and toss a wad of cash I assume to be sufficient towards the register. Instinct trumps dignity as my eyes see the door and I bolt like a dine-and-dasher for the parking lot.

Tagged
Narrative Jakarta, Indonesia
What did you think of this story?
Meh
Good
Awesome