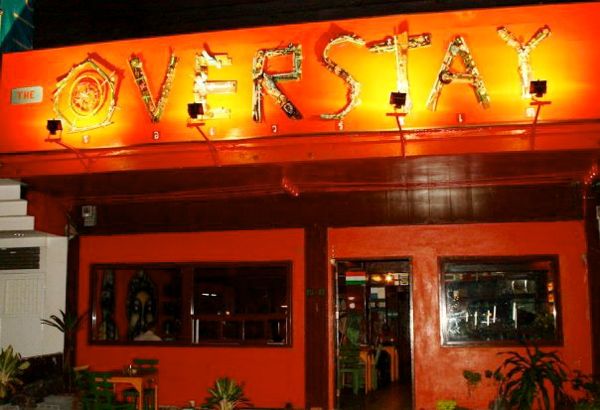 All photos by The Overstay. The sign is “made of junk left by people (clothes, flip flops) and pieces of the building (old pipes, wood).”

Yuval Schwok, The Overstay’s owner, reached out to us after writing about his accommodation in our piece $0.62 A Night: When Your Dorm Ends Up Being A Squat.

IT SEEMED LIKE a fair shake to interview him about a space that defies categorization, a sort of squat-hostel-crash-palace. It turns out that he’s a really nice dude.

Can you explain a bit about the spirit in which you opened your place? How in the world did you end up opening a squat-style hostel in Bangkok?

You know I always been a reggae fan. Right now the music playing is “money people is the root of all evil” but i do believe in small enterprise. I want to make a fair place for the people coming by and that can sustain itself. 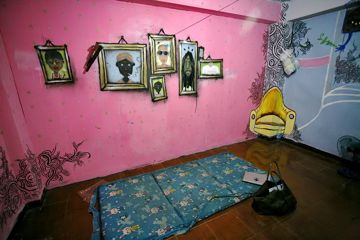 The Overstay is close to a squat because it san old abandoned whore house. We are renovating it but 25 years does leave scars in a place. I think more than looking like a squat it’s a different place because we try to make a community of people. It’s a meeting zone. We know the name of the people staying, we organize dinner together once in a while (money for the food in on donation basis), or make some cultural events. Not long ago we acted out on one of the guest’s play.

Do you have any theories about why there’s such a lack of hostels in Southeast Asia and why guest houses remain so dominant?

I think guest houses are a more convenient system for owners and customers, with no expectations from each side. The owner cashes in the money and doesn’t need to be emotionally attached to the people that come by, and the guest on the other hand spends as little time possible in their guest house and dooesn’t feel like socializing there that much.

I have to tell you, I was pretty shocked at the pictures I’d seen of your place. What’s the current state of the building and were those pictures a fair depiction of what the place looked like in summer 2009?

The pictures you saw were not a fair description of the place then and a person with bad intentions could make the place look bad today, but photos have a strong impact. I’ll let you judge.

The place is doing all right. We are fully booked at the moment. People come back to us between the beach and Chiang Mai type of thing. 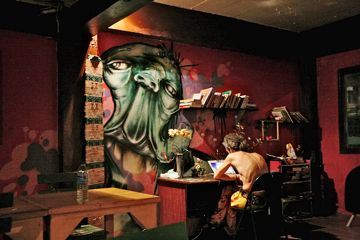 You’re selling a “six bed mixed dorm” on hostelworld for $.062 a night. This, according to the description, says that it’s a “dormitory ranging in size from 2 beds upwards. The offer mixed accomodation, hand made bunkbed with fan, shared bathroom, clean sheet.” Is that exactly what a person will get when they arrive if booking this rate?

A minor difference is that we have not 2 dorms of 6 but one of 10 people (it changed with the time), there are 5 wooden bunk beds that we did ourselves. We have clean bed sheets and fans shared between a couple of people.

How much of your business comes from sites like hostels.com, hostelworld.com and hostelbookers? Is it worth going through the process of seeing reviews and all of that? What’s the benefit of being booked through them?

It depends of the season. Right now at the season peak maybe 60 percent of our new people come from Hostelworld, other come from our website or have been recommended. The frustrating thing with reviews is that unsatisfied people will be very negative whereas people who like the place won’t think of leaving their feeling because they are sure will do just fine without it. Just like voting for an election.

We also let people stay for free during lower seasons. We met great people through Couchsurfing and we are supporting this project as we can. 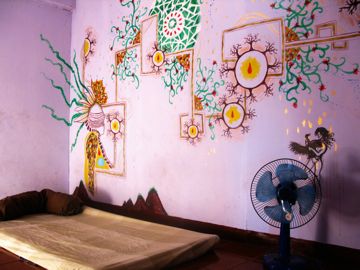 It would be flattering to be added to a major guidebook considering that the place is only one year old, but at the moment we would rather avoid Lonely Planet’s guide book. We are on many websites, even in a Bangkok tourist map but seeing a hoard of short stay tourist is something that will go against our ideology : What could we exchange ?

When everything is going right, you have the right mix of people and The Overstay is having a great night – what’s it like?

Some of best nights we have, we’re just 10 people sitting around the bar, listening to music, apparently nothing special but we can stay 5 hours in the same place just talking to each other about everything. On the other hand it’s nice to motivate the whole place into organizing a party, making fliers, decorations, guest playing music, having some dj friends coming over. We stay open 24/7 so we have many surprise parties. At 2 o’ clock, 20 people can come out of nowhere and fill up the bar. 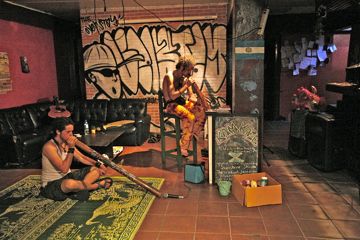 If someone read our article or a few of the more negative reviews online what would you say to them if they were thinking about staying with you?

We have clean bedsheets, mattresses, the toilets are ok and we have showers on every level. On the other hand the place is for anybody but not everybody. This is not a place for up tight travelers with suitcases and 2 weeks holidays. Long term travelers feel at home here.

Matador has a slew of articles about Thailand and just as many about hostel life, including our recent20 MORE of the Craziest Party Hostels Around the World and Nine Films That Should Be Retired From All Youth Hostels.

Tagged
Interviews Bangkok, Thailand
What did you think of this story?
Meh
Good
Awesome