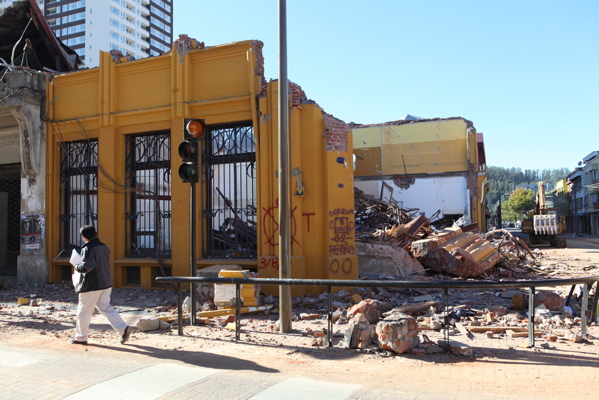 How quickly do we forget the feeling of instability? When do we learn to trust the earth again? Acclaimed Chilean novelist Sergio Missana considers the short- and long-term effects of the latest earthquake in his country.

ONE COULD ARGUE that there is no experience more kinetic, more purely experienced with the body, than the earth suddenly becoming unsteady. I have a vivid recollection of the 1985 Santiago earthquake. Yet my memories – after 25 years – are almost entirely visual.

I remember being able to see the oscillation of the ground I was standing on, water coming out of a swimming pool in waves and tall poplar trees swaying violently and bending in the windless evening.

Soon enough, all eyes will focus on the Chilean soccer team that will play in the World Cup in South Africa.

This past February 27th the quake hit in the middle of the night. The power went out. It was like reliving that old experience in absolute blindness.

I live in a canyon in the mountains overlooking Santiago, in an area called El Arrayán. Power did not return for five days. The whole communications system – land phones, cell phones, Internet – collapsed, so I spent the hours after the quake trying to contact my wife and kids – who were in California – and also my family in Chile, friends and colleagues, and listening to the radio in my car.

But I did not have a sense of the devastation in the South of Chile until I actually saw it on TV a couple of days after the quake. Once power returned at home, I kept watching.

Natural disasters tend to become human catastrophes, hitting the poor the hardest, and this was no exception. The earthquake and tsunami had shaken a sense of security, exposing the gross inequalities that underlie Chile’s macroeconomic success story. It became apparent that, in Santiago and other cities, several construction companies had creatively interpreted regulation codes in order to save a buck.

The official response provided a catalogue of ineptitude: the Chilean Navy did not issue a tsunami alert; the government hesitated before declaring a State of Emergency in Concepción and the port of Talcahuano, as looting escalated; rescue teams were not dispatched on time to areas where people were trapped under rubble; etc.

As I watched image after image of apocalyptic desolation, I became progressively horrified by the coverage itself, by the relentless drive of the media to raise the emotional pitch at whatever cost. The emotional manipulation and amplification ends up becoming its own corrective: it produces saturation, habituation and, ultimately, a measure of detachment.

A month after the earthquake and tsunami, things are getting back to normal. Chileans are focusing on other things, including the political transition: to the new conservative administration that has given the military a key role in keeping public safety, stirring old anxieties. And soon enough, all eyes will focus on the Chilean soccer team that will play in the World Cup in South Africa.

And yet, anxiety lingers. The demand for real estate — houses and apartments close to the ground — has multiplied exponentially. In the Maule Region, the hardest hit by the earthquake and tsunami, it is estimated that 20 percent of the population will have permanent psychological scars. In many coastal towns, people are still camping in the hills, their lives paralyzed by fear of the ocean.

After the initial shock and disbelief, there remains a vague but pervasive uncertainty, a mistrust in the stability of the earth, and a sense that the transitory works of reconstruction will become, as they always do, permanent. And that uneasiness, too, will pass.

By the time the Chilean footballers make it to South Africa, people in camps in the most devastated area will be enduring a very tough winter. While there has been a steady stream of donations since the earthquake, locals are still waiting for emergency housing and in need of basic supplies.

I’ll have some time off from teaching then and I plan to travel south to help out however I can and see things with my own eyes.

Have you experienced an earthquake? Please share with us in the comments below how it affected you.

Tagged
Narrative Chile
What did you think of this story?
Meh
Good
Awesome

Chile is reopening to international tourists at the end of November

4 off-the-beaten-path destinations to visit in Chile