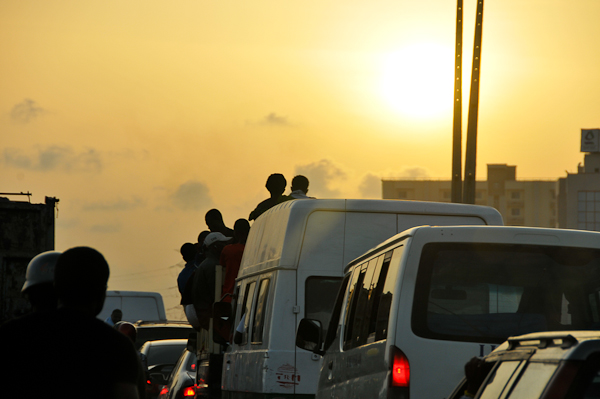 Lola Akinmade is confronted with the energetic survivalist frenzy of Lagos, one that was sheltered away when growing up.

Through loudspeakers connected to a van, a heavily synthesized voice belts out “Back to Sender, O! Back to Sender!”

These are the only English lyrics in the Muslim worship song he sings in Yoruba, a West African language. The once white rusty van is parked along the side of a one-way street yet traffic travels in both directions.

A poster of a deceased local engineer and “mentor” hangs next to a “Good Luck” sign, both pasted on the front part of a small bus designed for 12 passengers, but clearly holding about forty. Faces are pressed against its windows waiting patiently for the extra passenger the bus conductor is certain can fit in comfortably with the rest.

More buses roll past, emerging from a steamy bus park across from the music-blasting van. Stickers of “Adam’s Desire”, a sexual enhancer, are fixed to the bumpers and rear windows of some. Others have biblical quotes and references to God’s absolute might and protection. Patrons choose buses guided by how they spiritually feel on any particular day.

Okadas – motorcycle taxis – race up and down the street, buzzing and narrowly dodging cars as well as vendors selling oranges, phone cards, snacks, and other random items sitting close to the edge of the street with their toes within inches of rolling tires. The okada drivers don helmets, not because they want to but because of a newly instated law. Many helmets remain unbuckled or perched atop caps and geles — head-ties worn by women. 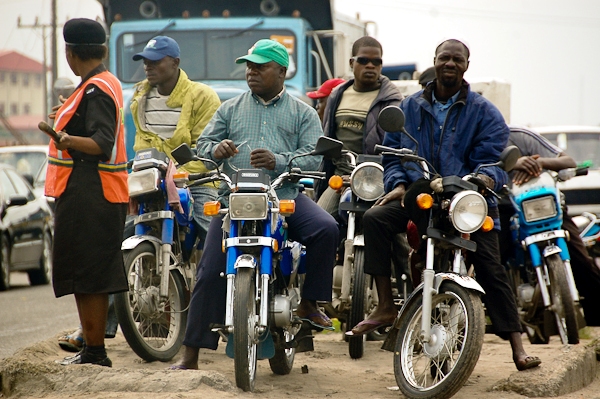 There is a constant sense of mortality. Pedestrians and vendors dart through oncoming traffic with mandatory cat-like reflexes. All senses are heightened.The sweltering heat so violates the mind that one retaliates with aggression to stay alive.

Not quite ready to jump into the maddening flow quite yet, I temporarily slip into the Nigerian daze to survive. A semi-conscious state where one stares with no facial expression at everything, not fully observing yet subconsciously aware of one’s surroundings.

Hours can be spent waiting, sitting, wandering, and relaxing within the daze. I had slipped into this daze to conserve my sanity only to be jolted back when a tanker-trailer sideswipes us violently. An intentional act which left me perplexed.

“You need just the right amount of madness in this town. Give them the illusion that you’re ready to snap any second.”

He’d cut us off and our frustrated driver had given him the “Waka!” sign – right palm open, fingers arched, and a quick flick at the elbow in the direction of the recipient.

This means “God punish your mother!”

The trailer driver had been ready to kill us for insulting him, and had rammed into our small car, shoving us off the road. Minutes earlier, a dilapidated tow truck had already cut us off and given us the “Waka!” sign at the sound of our frustrated horn. Personal insult is feigned as a way of bullying to get ahead. Just a few days earlier, another tanker-trailer had run over a woman who’d probably wandered into its path, crushing her until her entrails burst loose from her body along the side of the road in full view of everyone.

In the midst of it all, air-conditioned sedans, borderline airtight seem to glide through the frenzy. Uniformed schoolkids, their cargo, stare out windows, their noses pressed against chilled glass, observing the sweltering world outside. Wondering what it sounded like, as people, cars, buses all seemed to move by in slow motion to them.

Early afternoon meant they were probably on their way to after-school lessons. I watch them drive by with a sense of familiarity.

I could easily recount their day, hour by hour. They probably woke up this morning to either Christian or Muslim prayers, took a bath from a warm pail of water, scarfed down breakfast of bread and tomato-onion omelets, and got carted off to school.

They’d scream the national anthem at the top of their lungs as competitive juices begin to bubble to the surface. They’d compete to be first to ask questions in class, arms shooting up like referee flags on offside calls.

Compete to be heard and seen.

Life is lived day to day here. Most meals are cooked and completely consumed the same day as refrigerators are at the mercy of the local electric company and small generators. So open markets thrive. Sole proprietorships thrive. Daily routine pulsates at feverish pitches here and it needs to be. Nigerians are alive today and this fact is celebrated with noise, organized chaos, aggression, and a sharpened sense of “now”. 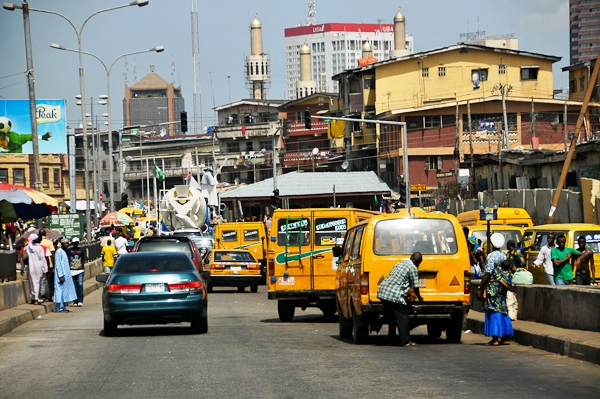 People exist vibrantly here and they need to. For any minute, they could very well be returned to their sender.

“You need just the right amount of madness in this town,” my little sister jokes as she skillfully steers a large SUV through thick Lagos go-slow traffic. “Give them the illusion that you’re ready to snap any second.”

One only spews from experience in this city and okada drivers remain the main traffic burn, whizzing by and squeezing between vehicles like mosquitoes oblivious to merging buses and cars switching lanes.

“Madam, wetin dey do you?!” one biker yells in Pidgin English after almost crashing head-on into her jeep in an attempt to squeeze by as she made a perfectly legal right-hand turn.

She quickly rolls down her window and lets out a crazed laugh.

The driver gives her the “Waka!” sign and speeds off.

As her maniacal laughter dies down, I turn to her. She’d been one of those little schoolkids wearing blue and white checkered gingham uniforms with large blue collars, taking in the world from the backseat, with her little snub nose pressed against a chilled glass window.