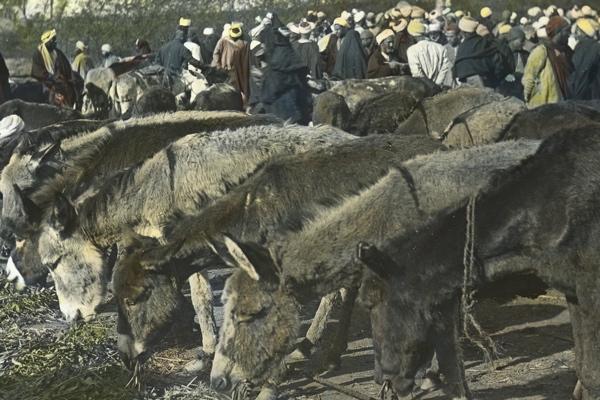 Another big middleman just strolled into the marketplace. What’s it mean to the little guy selling sentences? Or to the casual shopper with a pair of dinar in his pocket and a hankering for a good story? An old-school journalist weighs in.

FIRST SOME CONTEXT (from the editor): Not long ago, from the New York Times Magazine, we got a rough overview of online news-and-writing ventures such as The Faster Times and True/Slant. What did these bustling start-ups mean for the future of publishing? Would any of them make it? If so, what was the secret?

The bright new model, it seemed, was one in which the lone (read: unemployed) journalist/entrepreneur banded together with others of his or her ilk to publish, promote, and ultimately, we hoped, profit in some small way from what he or she could not help but continue to do from the echoing depths of his or her basement, or from the road: i.e. to create “content.”

For just whose benefit, exactly, remained very much in question. Though of course from our vantage here at Matador it seemed a decent step up from the Brazilian-gold-mine model of content-agglomeration pioneered by the likes of huffpost and examiner.com.

Then came the news that Forbes, that armada of well-stocked galleons from the Old World, had for an undisclosed sum acquired True/Slant. Was it good news? Perhaps. Or perhaps not.

Here’s our man Robert E. Cox with some thoughts on the subject (for which he will be paid the approximate market value of a fifth of mid-shelf bourbon whiskey):

THERE’S BEEN A LOT OF NIBBLING AROUND THE EDGES of this type of flea market for journalists — and logically so; the internet lends itself to this sort of thing — and the entry of Forbes brings a heavy-hitter to the table, which might move the concept to a higher mesa.

A couple of things strike sour notes. One, the concept of “journalist as entrepreneur” seems an oxymoron; a dangerous one at that. There should be at least a friendly conflict between the reporter (journalist) and the publisher (entrepreneur). Journalists are supposed to tell the truth; publishers are supposed to make money. Reporters drink bourbon, publishers drink Scotch. The two are not precisely compatible.

But the two are symbiotic — the reporter relies on the strength and backup of the publisher to stand behind him/her whenever somebody gets pissed off about a story and comes a-threatening. That relationship has always been the rock upon which good reporting has rested, and the decline of big, well-funded, powerful daily newspapers, I’m afraid, marks the beginning of a decline in the number of reporters willing to publish unpleasant facts. And those “unpleasant” ones are the facts we really need to know. Will Forbes and other flea-marketeers be there to back up its contributors when they get threatened? I’m doubtful.

It also grates a bit to read that the contributors to this venture will receive “bonuses” from Big Daddy in return for drawing readers to the advertising that Big Daddy sells. Something’s wacky there: I think that the creator of the product — the written material — should get the lion’s share of income derived from the creation, and that the middleman — in this case Forbes — should get a smaller piece of the loot for distributing the product and selling the advertising. Sort of like the relationship between the ketchup manufacturer and the trucking company. What’s more valuable here, the ketchup or the trucks?

(I’m envisioning a day in the future when writers take to the streets and unionize for fair wages. Back to the future, eh?)

All that said, this seems to be the way things are heading, and as long as there are more people dying to become writers, there will be publishers concocting ways to get rich off their labors.

What do you think? Is it pure nostalgia to dream of journalists and publishers as not just separate hats but separate people? Does it make sense to put the creators of content also squarely in charge of its distribution? Will all this ever settle down, so we can just get back to reading and writing?

Colorado's wilderness through the eyes of a photographer

Travis Burke on passion and dedication