I find silence on the rooftop of Feynan Ecolodge, in the middle of the Dana Biosphere Reserve, lit by candlelight and millions of stars. Our guide Ali shows us the galaxies and the stars named by the Greeks. Taurus and Pisces. The Seven Sisters flanked by their stalker and their protector. Polaris in the centre of it all, to be replaced in 15,000 years by Iota Cephei. 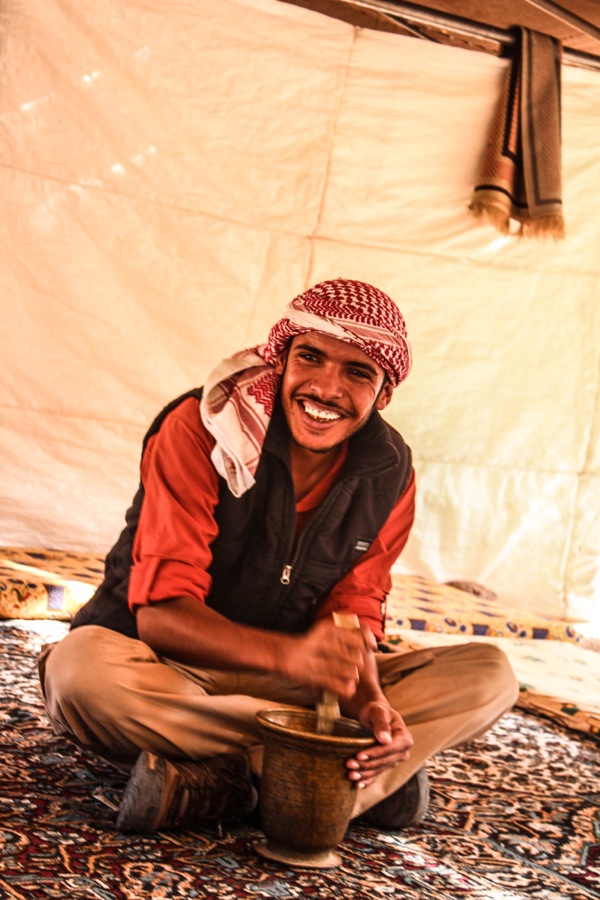 Ali’s brother Suleiman crouches to pour us sweet tea and makes fun of us for not being able to see him in the dark. He’s handsome and 24, with brown or green eyes depending on the light, and long, black eyelashes. We ask endless questions.

“Where does your family sleep?”

“The sky is our blanket, and the earth is our mattress.”

“How do you meet girls?”

His family is nomadic, migrating from shelter to shelter in the mountains, depending on the season. He has six brothers and four sisters.

“And one very tired dad,” Suleiman counters. “He has three wives.”

We ask if he’d like to marry a pretty Canadian girl. He says, “The grass is always greener.” Some cultural expressions are transcendent.

The next morning, Suleiman leads us to meet his family for lunch. He explains that when you approach a Bedouin tent, you must cough to let them know you’re coming. Just in case, you know, they’re doing something indecent.

The tent is like the common area, a rec room. The cloths covering the roof are hand-woven from goat hair. Suleiman tells us that in Bedouin culture, a stranger can stay for three days and the host will not ask any questions.

“What happens if he or she doesn’t leave on the third day?”

“That’s why we have this stick,” he kids while motioning to the wooden mihbaj, a Bedouin coffee grinder, with its foot-long pestle.

Someone else asks how a visitor shows his or her appreciation for the hospitality. 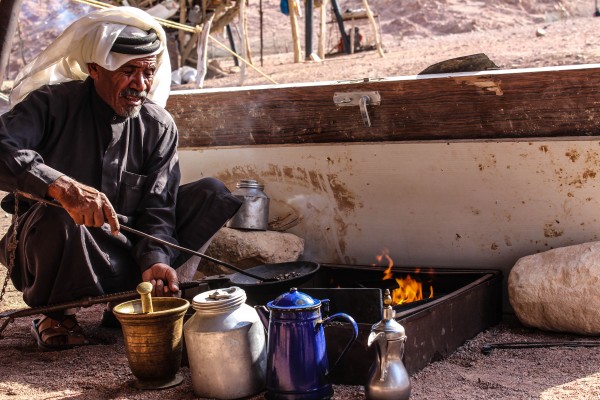 The coffee beans come from Yemen or Brazil, and are green until roasted. We all sit around on the cushions, being careful not to extend our legs into the centre lest we be considered rude. Suleiman’s wife-laden father, Mohammed Abu-Khaleel, starts the fire by placing an old door against two rocks to shield the fire pit against the wind. He does not speak English, but he doesn’t mind us taking his photo while he prepares the coffee.

Suleiman passes around the beans so we can smell their earthy mixture, and then begins the art of grinding. You can make the process musical by hitting the sides of the mihbaj with the pestle. Doing so is an invitation for neighbours to join you for coffee.

“If you don’t like your neighbours, do it quietly.”

When the coffee is ready, Suleiman’s father takes the first taste to prove to us it isn’t poisonous.

“Now we wait half an hour to see if my father is okay,” jokes Suleiman.

We use our right hand to take the cup, never the left. The eldest takes the first drink, and then the cup is passed to the right. Suleiman waits while each person finishes his or her mouthful, and then passes the cup along. You’re allowed three cups at the most, but no more. I shake my cup to indicate I’m finished. If the vessel touches the floor, it means you have a request to make, like a marriage proposal. Suleiman’s hospitality is making me think a marriage proposal might not be so bad.

The women stay busy elsewhere, and Suleiman’s mother makes us bread baked in the ground. When it’s done, she knocks the ash off with a stick and holds it up for us to see. We’re not allowed photos of her face — just her hands.

Back in the common tent, we eat the bread, abud, with a tomato, potato, and onion dip. It’s likely the most delicious thing we’ve eaten on the trip, four-star restaurants and all.

I’m thinking about the simplicity of it all as Mohammed Abu-Khaleel tends to the fire. The sheer purpose in life to fulfill daily tasks, to use your hands and your skill to live the day. And then a cell phone rings, and Mohammed Abu-Khaleel pulls a flip phone from his pocket. The modern Bedouin.

Tagged
Jordan
What did you think of this story?
Meh
Good
Awesome