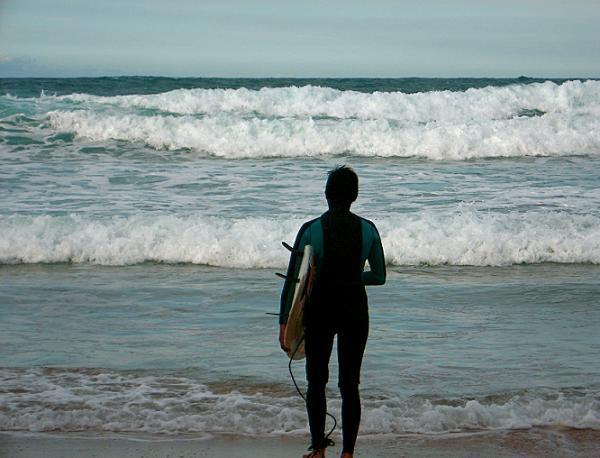 Benita Hussain keeps making it out into the lineup but when the waves get big, her fear of dropping in leads her to question more than just her surfing.

I WAS HAVING ISSUES. Even Edwin could see that from the beach. Every time the dark lines of the sets approached, I could feel my heart start to palpitate. Images of wiping out and getting pummeled underwater would flicker through my mind.

As the waves passed under me, I’d think: no not this one. The next one. I swear. It was happening more frequently every day, working so hard to get to the line-up, only to choke once I got out there.

For the previous few weeks, I had been living with Edwin Salem, a well-regarded big wave surfer in Puerto Viejo de Limon on Costa Rica’s Caribbean coast. It would be my final destination on a six-month trip around the world.

After years devoted to being a lawyer and then a non-profit director in demanding New York City environments, I had been laid off during the previous summer. I grabbed the opportunity to do what I actually wanted for the first time in recent memory, and with very little planning, bought a one-way ticket to Copenhagen.

I was venturing into the unknown, which I knew would be difficult (but maybe helpful) for someone as alpha as me

I was venturing into the unknown, which I knew would be difficult (but maybe helpful) for someone as alpha as me. But it was that letting-go of all my previous certainties that seemed to bring me special experiences as well as unexpected practice in surfing.

While in Denmark, I stumbled on the windy fishing village of Klitmoller, where I discovered cold waves and year-round surfers who welcomed me into their homes and community. Then, during my drive across the northern coast of Spain, I fell in love with the intersection of artful cuisine, surf culture and Belle Epoque architecture in the Basque Region, where I extended my stay just to explore the beaches from Bilbao to Biarritz.

Experiencing countries with a surfboard seemed to both connect me with locals and also immerse me in the nature of autumnal Europe. Plus, it was plain fun.

But something changed in Lisbon. Almost two months into my solo traveling, the winter holidays began to approach, reminding me of home and the life that I had left there. I was staying with a pro-surfer and friend-of-a-friend named Ash, who urged me to come out to Costa de Caparica, certain that I would find Portugal’s breaks unforgettable. 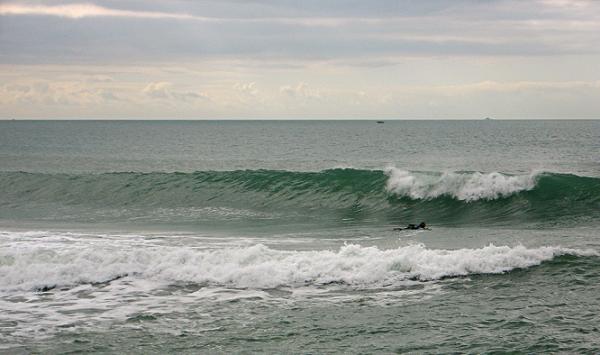 This was true. The waves at Costa were unforgiving, the heaviest and fastest beach breaks I had ever witnessed.

The water temperature felt lower than the North Sea’s in Denmark. Gone was the turquoise peeling of the Bay of Biscay in San Sebastian. In its stead were the deep navies and grays of a part of the Atlantic that never felt the warm push of the Gulf Stream.

While I sat shivering in those late-November line-ups with Ash and his friends, the skies would split in orange and blue halves earlier each night. The shadowed bars of the waves would march towards me and I began to feel pressure in a way that I never had before. It was the same type of performance anxiety that used to give me insomnia during law school, but this time I couldn’t seem to meet expectations in the same way.

As the steep, hollow waves would roll in, I would scramble to get out of their way, sometimes getting tossed around. For every wave I would catch (and often fall off of), I pulled out of three or four.

My halfhearted attempts were met with halfhearted wipeouts. I felt wimpier every day, and at the end of each session, I’d pile myself into Ash’s backseat in silent frustration. We would drive without speaking for a while before he’d gently say that I was strong enough but that I had a commitment problem.

I had to agree, but I couldn’t pinpoint my issue. In so many aspects of my life, this trip included, I had thought of myself as adventurous and decisive. All of sudden I was crippled with fear and questioned whether I even knew what I was doing, and, more importantly, whether I was ever as brave as I had thought. 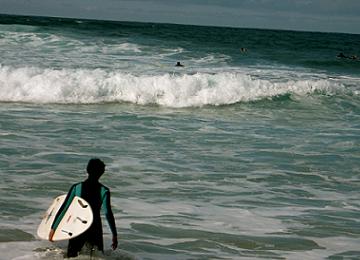 When the humbling and cold experiences of Lisbon, followed by the coastal town of Sagres, were done, I decided to chalk it all up to Portugal—maybe surfing anywhere in that country was just not for me.

I felt guilty and secretly grateful that I didn’t have to deal with any of these questions until I got to the mellow breaks of Australia’s Gold Coast in January, where I was meeting my best friend. I could just ignore it and settle into my comfort zone without anyone calling me out or challenging me.

When I returned to New York, however, I was instantly thrust back into the hectic pace of the City as well as disapproving conversations with my family about my abandonment of them and my legal career. While some friends seemed inspired by my tales, others had become distant. I realized the gravity of the choices I had made during the past Fall—leaving behind a lucrative career and loving boyfriend—to be, I admit, selfish.

I carried the weight of those decisions to Costa Rica, and right into the home of someone whose very passion it was to challenge himself. After observing me at Playa Cocles, Edwin told me that he could see fear in my eyes, like I always wanted to bail. He suggested that maybe it was something personal that was holding me back and that I would need to confront it first on land and then in the water.

His comment made me admit (to both of us) that I had made a real gamble in the process of breaking free from my unsatisfying trajectory.

I told him he was right before bursting into tears, crying more deeply than I had in months. His comment made me admit (to both of us) that I had made a real gamble in the process of breaking free from my unsatisfying trajectory.

Of course, the gamble had been valuable: I was happier and healthier than I had been in New York, made new friends and rediscovered old ones, and, at the very least, had gained confidence in my writing.

But traveling also brought with it big risks—mental, physical and now aquatic. I had always met my academic and athletic challenges head-on, but in this case, I had hit a wall that seemed insurmountable on so many different levels.

Perhaps it was that I had been paddling out into greater uncertainty with every last-minute flight I took as I traversed the globe. Making all those big drops into the unfamiliar had been exhilarating on one hand but had also resulted in a lot of personal turmoil. I looked up Edwin through my tears and shrugged. “I’m just really tired.”

He responded, “Forging your individuality is a painful process. It’s scary and hurtful when those you care about question you and what you’re doing. Surfing is about the same thing. You have set aside your fears and grapple with what’s in front of you.”

Again, he was right. Traveling, and doing it alone, has and will always be net-positive experience for me—as will surfing. Both are fun and rewarding, if allowed, and both involve taking chances, taking some poundings and coping.

I nodded at him then wiped my face against a bare arm, promising out loud that I would work on it. I continue to go out on a daily basis since then. And although the dark lines and heavy lip of the waves are rarely less punishing at Cocles, when I swear I’ll catch the next wave, I have started to mean it.

Please check out some of Matador’s surf stories from Spencer Klein, Another End of the Road, and When Maximo was our Captain.

Tagged
Narrative Lisbon, Portugal
What did you think of this story?
Meh
Good
Awesome

In Lisbon, Living Like a Local Starts at Pub Lisboeta

17 Images That Prove Lisbon Has the World's Greatest Street Art

A Love Letter To Lisbon