I COULDN’T FINISH my chicken pad thai. It was good, I was just full. I scooted the mostly empty plate to the edge of the table and raised the pint glass to my lips as the final seconds of game 7 came to pass much as everyone had resigned they would, with a total shut out.

The Thai restaurant took the defeat in stride with Jägerbombs. Outside, 100,000 fans milled about. Walking to the corner of Granville and Nelson the crowd went from loose knit clusters of fans to a shoulder to shoulder standstill.

I climbed up on a green power box and looked beyond the thousands of bobble heads to catch my first glimpse of the mayhem that would soon grip the city. 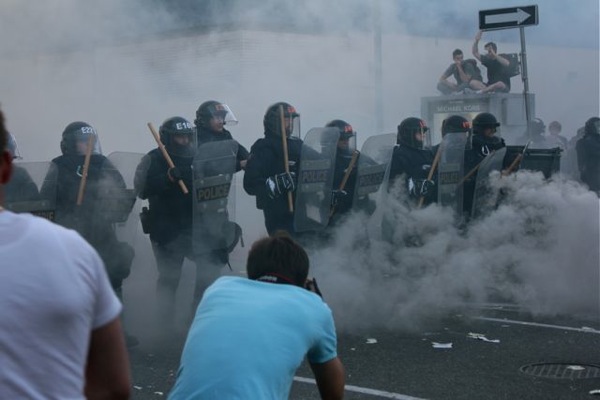 The cascading tinkle of a shattering storefront whipped my head left as a pizza joint was violated with a trash can.

I could see dozens of 20-something fans-turned-thugs kick at an overturned police cruiser with their Nikes. The fender was wrenched free and being used as a club on the hapless sedan.

Hopping down from the power box I zigged toward the pandemonium with one trite syllable flashing neon in my mind: blog. 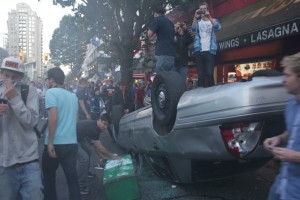 When I reached the front line of the chaos a canister of gas exploded on the trash strewn sidewalk with a shower of sparks.

Through the billowing smoke riot police with wooden faces advanced and beat truncheons against their shields.

In a careful line their every step was accompanied by a thump. 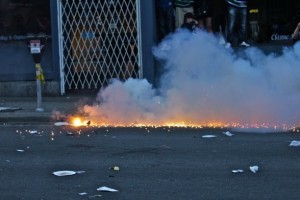 I have never seen more fucking cameras and cell phones in my life. iPhones were held aloft as college kids jockeyed for position next to television camera crews.

Kids mugged for their friends in front of the riot scene. People cheered and jeered, high fived and danced like jesters.

Every douche bag was grinning and giving thumbs up as though they were some smarmy politician running on a platform of civil disobedience. 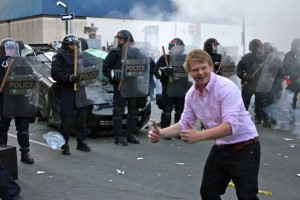 I retreated with a group of locals to the 18th floor of an undisclosed building and watched the black smoke rise from burning cars 4 blocks distant. Someone had brought beers and as we cracked the cans open the staccato percussion of flash bang grenades accompanied explosions from the burning cars.

Eventually I would make my way back to sidewalk, where the violence had doubled, where people were bleeding and urinating, where looters were destroying storefronts. 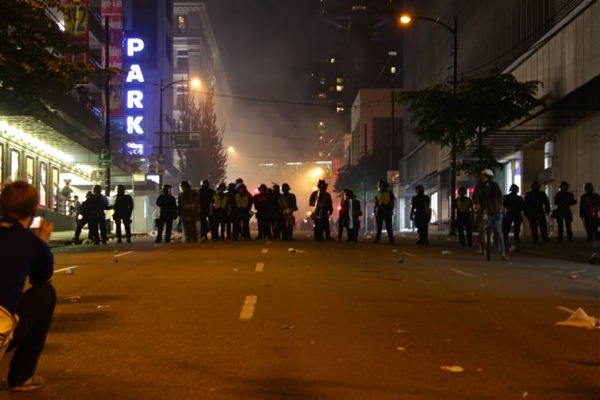 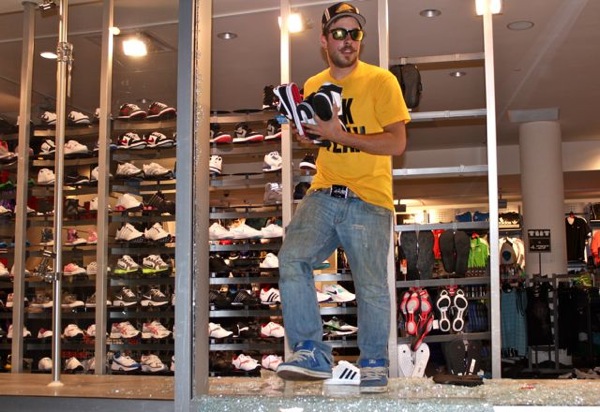 Amid the discord where cops continued to gather their forces and don gas masks I found a Subway and ordered a 6 inch spicy Italian, 21 oz Coke and 2 Macadamia nut and white chocolate cookies.

I could only stomach one cookie and tossed the other in the trash.

Tagged
Narrative News
What did you think of this story?
Meh
Good
Awesome