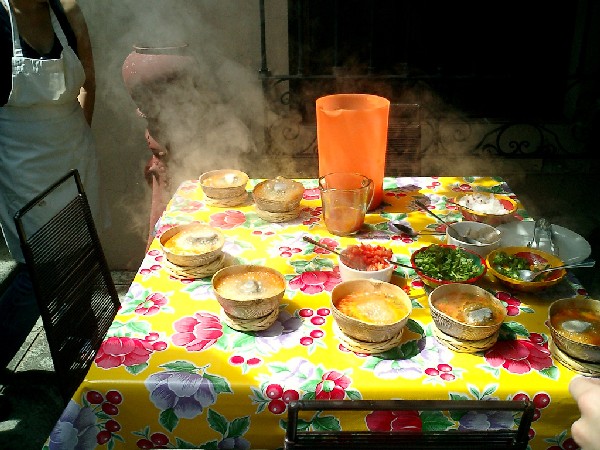 POPPING CORN KERNELS off the cob without benefit of a knife involves more skill than I would’ve guessed—though by now, after a month of trading English classes for cooking classes with Doña Ludy, I should be used to this.

My thumbs hurt—I can’t seem to get the right angle. My 11-year-old niece, Montse, has resorted to pulling off each kernel individually. Meanwhile, Doña Ludy runs her thumb over the cobs and the kernels seem to leap willingly into her cupped palm. I’ve never seen her make a less-than-graceful movement–but then again, I’ve never seen her out of her element.

A corn cob shoots out of my hand and across the table and we all giggle. I’m happy to be the clumsy gringa if it makes Montse laugh—she’s grown so quiet and serious in the past year, but here in Teotitlan she seems more relaxed.

Doña Ludy has a lovely way of using Montse’s name every time she addresses her: How are you, Montse? Would you like some water, Montse? At home she’s always “Negra” or “China” or “¡esa chamaca!” and while I don’t know for certain that it bothers her, I think it has to be a relief to hear her actual name. Just one more reason to be grateful to Doña Ludy. 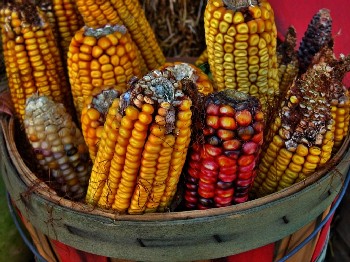 So here we are, I think. For all intents and purposes, each of us is from a different world: Doña Ludy can trace her family back for thirteen generations to this very place. She can speak the language her great-great-grandparents spoke.

Montse is the first generation of her family to be born in the city, and she’s one hundred percent a city girl: cell phone, hair gel, the works.

And me, a patchwork of European heritages from the American suburbs, by some lucky combination of coincidence and choice, making a life here in Oaxaca.

When we’ve finally finished separating all the corn from the cobs, Doña Ludy dumps it into the blender, covers it with water, and hits “puree.” She told me once that her mother-in-law refuses to use a blender, or to allow anyone to use one in her presence: she’s afraid it will explode. She does all her grinding on the metate, and doesn’t speak Spanish. Another world.

39 of the most breathtaking natural wonders in the world
Drink your way across Texas wine country on this Christmas wine train
How to plan for 2021 travel in the age of COVID, according to 23 travel agents
What NOT to do in Istanbul
For the perfect day of hiking and Colombian coffee, head to Jardín