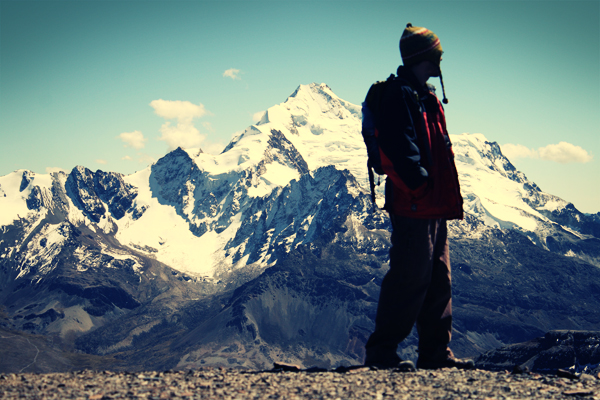 All photos: a song under the sugar sugar

As Hal finds out, not all questions get answered on the $10 tour.

The two tassels of my llama-wool hat are blowing wildly across my face, caught in the wind as it whips at us here on the exposed western slopes of Chacaltaya, Bolivia.

Juan, our guide, is darting up and down the line, ensuring both the speeders and the stragglers get to hear his fact-filled script about the glacier that runs upslope parallel to our rocky trail.

“It’s one of the highest in the world,” he points, patiently waiting for me to throw a glance in the direction of the glacier before he zips off to the next hiker.

Sure, puffing foggy breath at 17,700 feet, gazing down the snowy spine of the Cordillera Real, is exhilarating. But I’ve come to see the glacier.

I stumble, missing a step. A little lightheadedness is all. Maybe I should’ve eaten more for breakfast. And there’s the elevation, of course. I shake my tassels to clear my head. That’s better.

Mild dizziness aside, summiting is a cakewalk. Miners do it—the upper plateaus are littered with ore buckets and little lake-lets are stained blood-red from iron and green from copper.

Die-hard skiers do it. Chacaltaya has held the record of world’s highest ski resort since 1939, when Club Andino Boliviano built an access road, small lodge, and rope-tow lift up the glacier.

And tourists do it. They come in secondhand Asian minibuses that puff black smoke almost as thick as the dust kicked up on the dirt road leading from El Alto. The tour is part of the standard fare hawked in the La Paz traveler’s ghetto of Calle Sagárnaga. 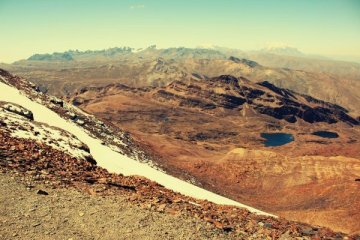 “An easy way to bag a high peak,” reads Lonely Planet’s description. Buses shuttle you to the lodge at 17,300 ft. It’s a simple 30-minute walk from there to the summit.

“Bagging peaks” isn’t why I’m here, though. Sure, puffing foggy breath at 17,700, gazing down the snowy spine of the Cordillera Real and the tops of the clouds covering the rainforest, is exhilarating. But I’ve come to see the glacier.

It’s not what you’d expect—no frozen river winding through a wide mountain pass. Only a thin tongue of powder, long enough maybe for four or five tight turns on your K2s.

Fact is, Chacaltaya is dying. By some accounts, it’s already dead. Like most of the world’s rare tropical glaciers, its growth has failed to keep pace with global climate change.

It’s easy to find accounts of the loss of the world’s highest ski run. People now only come to carve in February, and even then just to say they’ve done it. The rope tow—or what’s left of it—hasn’t worked in a few years. The lodge gives off a Shining vibe.

But what you won’t hear as much about is that Chacaltaya’s glacier is vital to the roughly 1 million inhabitants of El Alto—none of which, I’d reckon, has ever clicked into a ski. 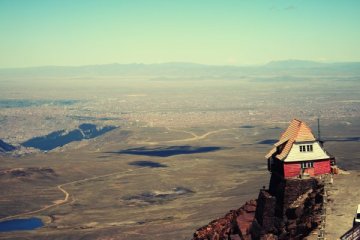 “It’s their only source of water,” Juan tells me as I stand shivering at the summit, taking in the smoggy sprawl of El Alto on the Altiplano far below.

La Paz’s satellite city is growing faster than the glacier is shrinking, coughing up more and more red-brick and adobe huts as campesinos flood in from the countryside, lured by the promise of employment and cheap housing.

“So…when the glacier’s gone, what happens to El Alto?”

I don’t get a straight answer. He tells me about government efforts to promote conservation and responsible use. Seems too late for that, I refrain from saying.

I look across to the peak-perfect form of Wayna Potosí, one of the Cordillera’s most recognizable mountains. Its flanks are thick with snowpack for a good 3,000 feet down from the top.

These are questions that don’t get answered on the $10 tour.

“Two more minutes, then back to the bus,” he shouts to us over the wind. My tassels nod in acknowledgment.

For more on the world’s vanishing glaciers, be sure to check out this photo essay on Matador Change.

Tagged
Narrative Bolivia
What did you think of this story?
Meh
Good
Awesome

10 places where you will feel absolutely dwarfed by nature

On the culture of the mines in Potosí, Bolivia