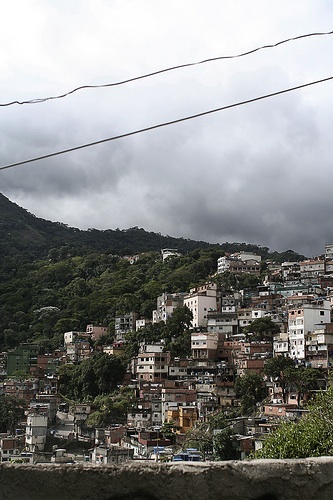 David Johnson was in Rio, just walking around, drawing, looking for views, and figured the view from Rocinha might be good to go.

So I found the sickest view yet of Rio.

I was just going to take the combi from Leblon to São Conrado to just check it. See if I was missing surf spots. Beautiful of course. Some surf. Then I look up and see the favela looming above.

I asked some kid. He said that was Rocinha. I said, “I cant go up there can I?” He said, sure, tudo tranquilo.

So I was just going to walk to the edge of it and look in. Then I see the horrible jeep tours with dumb tourists sitting in the back, so I figure it can’t be that bad.

I just walked in, found a restaurant and ate something, sort of hid in a corner with a view and drew a little sketch. The moto taxis flying buy at breakneck speed. I saw combis with signs for Gavea so I figured the street must pass through. I was going to just take a combi and ride through it.

But then the mototaxis were flying by for 2 reais to the top. I was like, ‘if I am going to go up, I want to go on the mototaxi’.

So this kid carries me to the top. The road up is just a series of cutbacks to the top. Favela is pretty normal. Restaurants and stores and papelarias and street vendors. It just happens to be built on a hill as steep as anything in San Francisco, all sorts of little alleys and passages and smells.

The favela is huge though and wraps over and around this huge morro. Sick views abound.

This kid dropped me off close to the top. I wanted to get one little sketch. I got good at five minute sketches.

I drew a couple and passed the top where it starts to drop back to Gavea and I see the bend that keeps on going up.

It’s like I just peer around the corner and everything looks normal. Nobody was staring at me too much. People walked by looking at the drawings and all are like, shit que massa. I only had ten reais to be stolen if anything.

Then this kid walks up and looks and tells me there is a sweet view just around the corner looking towards Rio. He was like 14 or 15, talking about soccer and asking about the drawings. He seemed alright, so I was like cool, I want to see it.

Hill is super super steep and it sort of winds back and forth. Sick views towards Barra. Then we come around the corner. A parked car with its doors wide open, joints being smoked in full view, the hip hop blasting, and about five guys armed with m16s, in full view, and radios talking back and forth.

My friend Charles was right: there are hills that the cops just do not go up in Rio. I had fully crossed the line.

I sort of paused but it was too late. They saw me and the kid and were like, ven aqui ven aqui. At this point I thought it sort of unwise to just shine them and turn my back. I had nothing to hide, and the view that they were sitting at…..

They asked me what I was doing and I said desinando. Showed them my sketchbook and before I knew it they were flipping through telling me that they are very good sketches. One guy is asking me something about me drawing him for a tattoo for his girlfriend.

It was cool, but just didnt think it was exactly the spot I needed to sit back and kick it at. I wanted to draw something, but i dont think i could have held my hand still. But something about my face and just walking up and looking them in the eye smiling and saying tudo bom. tudo tranquilo. And its all cool.

I sat for a minute and looked out across Rio. Wah, you could see the lagoa and all the morros and Corcovado all the way to parts of Niteroi, like looking down the line of a sick wave or something. They were radioing up and down the hill. The beeps of walkie talkies. Then i just turned and said:

They smiled, we exchanged the Brazilian international sign of tudo bom, the thumbs up, and I walked back.

The moto-taxi kid apologized, said he didn’t know they were there, that he wouldn’t have taken me there if he had known it.

I was actually glad he took me up there just to see it.

Those guys had the sickest view of Rio I have seen yet.

Tagged
Narrative Rio de Janeiro, Brazil
What did you think of this story?
Meh
Good
Awesome