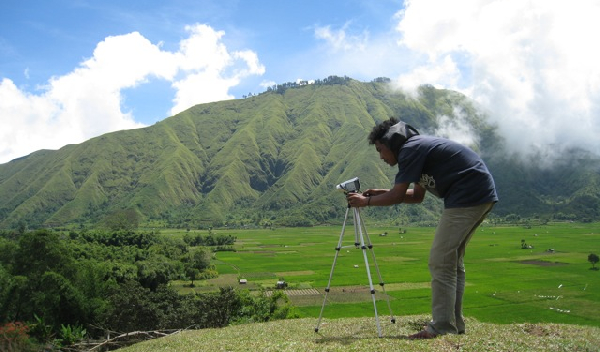 All photos by Misty Tosh.

While working to set up a grassroots NGO in Indonesia, Misty Tosh finds one of the local villagers is a natural born filmmaker.

Drips of sweat meandered down my grimy face as I slowly repeated the words to my new friend: time-code, close-up, wide-shot, master-shot, b-roll.

Hassan, a devout Muslim, had never heard these alien words in his entire life. He absorbed each one, and then repeated after me, snapping his fingers as each word finally clicked in his head. Snap! That’s what a close-up is. Another snap! So, that’s time-code. I could practically see his brain working overtime.

To me, these boring words made up pieces of the film lingo that I uttered every working day of my life as a TV producer. To him, they sounded exotic, like something so mystical it must be only the chosen that get to whisper them.

I met Hassan the first day I arrived in back in Sembalun, a remote mountain village perched at the base of Mt. Rinjani, the 2nd largest volcano in Indonesia. I was there to commandeer Phase 2 of my recently formed grassroots NGO, 4th World Love, whose aim is to set up community centers in magical villages around the world. 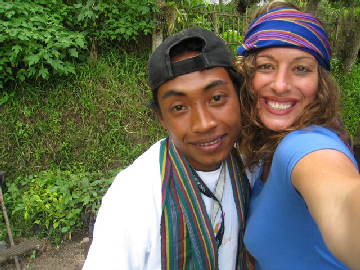 Sembalun was the first spot on the globe we’d taken hold of and the excitement was thick in the air.

I bumped into him at the CDC (Community Development Center) as he broke through the knot of villagers on hand to help me and a few volunteers prep for opening day.

Hassan helped me hang a plastic wall calendar, and quickly made himself stand out more by gallantly sweeping up the layers of grime on the floor and setting up desks for the new computer room. His English was very basic, but what caught my attention was his always-smiling face and his eagerness to jump right into any scenario to assist.

The minute I whipped out the HD camera I’d brought over from the USA, he bravely scooted over to see what the new toy was. I never touched that camera again.

The CDC immediately became exactly like a bustling film production office, with villagers stopping in at all hours. Guitar sessions, digital camera lessons, random sing-a-longs, and Spanish 101’s were slung out to anyone who showed an interest–which was the entire village, it seemed.

The slew of international volunteers taught English and computer classes from dusk ‘til dawn, while me and my bandito crew of newly created “filmmakers” tore around town on motorbikes shooting everything we could. Establishing shots, b-roll, full-on interviews—we were happily capturing tiny snippets of life in a faraway Muslim village.

The more I taught Hassan, the more independent he became. I’d be strolling toward the CDC at the crack of dawn and he’d shoot past on his way to the mosque shouting through the fumes from his moto how he’d just captured a sunrise. 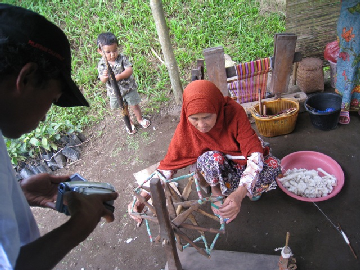 I’d be reviewing his tapes, teaching him how to create a camera log, and I’d see stunning footage of farmers in the scorching fields, old toothless women cooking in outdoor kitchens, and funky insects clamoring along bright green leaves. All stuff he deemed necessary to tell the story of his village.

Within days, he became a champ of every type of shot one needs to tell a good story. You can’t just get a master of someone picking beans. Bor-ing. You must get a close up on the hand picking the bean, the expression of the farmers face in the hot sun, a wide of the entire valley, singles of the individual beans.

These shots came to him naturally after I’d explained their purpose only once. His instinct was golden, his attitude spot on. After looking at how creative his shots had become, it hit me: I’d created a super-star

The day I taught him how to use a shotgun mic was the day he became a director. With very little handholding from me, he started art directing rickety baskets and colorful handmade scarves around Harti, our “talent” who was sharing an old Sembalun semi-urban legend. 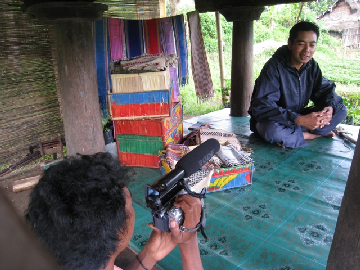 If he heard a truck roar by, he’d yell CUT and demand that Harti start over, so we could hear the all-too-important dialogue. Later that night back at the CDC, I watched in wonder as he labeled tapes, recharged batteries, shammied up his lenses and packed away his gear.

We celebrated most nights with some local moonshine and he usually busted out a bit of salsa after acoustically singing a handful of ancient Sasak songs. A renaissance man, that one was.

When it came time for me to leave Semablun, there wasn’t a frosty chance in hell I was dragging that camera home with me. What’s $1,300 bones, really? I can always get a new one. I was bear-hugging Hassan goodbye, while shoving blank tapes and advice his way on what to shoot while I was gone. He nodded his understanding.

When I got an email from him a few weeks later, he laid out his upcoming shooting schedule: his intention was to film the local red rice harvesting ceremony, as well as the yearly bamboo fighting ceremony in a nearby village. He’d also managed to score some footage of the eruption of the baby volcano inside Rinjani a few days earlier. Epic moments.

It snuck up on me after reading his plans that that’s what 4th World Love does—we’re like the middleman that makes dreams come true. However big or small they are, we just spread the love. I can’t wait to bring that kid to the USA.

If you are interested in volunteering with 4th World Love, please check out www.fourthworldlove.org. It’s cheap, it’s life changing, and everyone with a passion to share the laughs is invited to come along for the ride.

For more on volunteering abroad, please check out MatadorChange.com

Tagged
Narrative Indonesia
What did you think of this story?
Meh
Good
Awesome