I read a “Jonah and the Whale” storybook in poorly pronounced Spanish as two girls in dirty school uniforms squeezed on my lap.

Another child, barefoot and wearing a wraparound morga skirt and a floral-embroidered huipil blouse, braided my hair. She occasionally paused to readjust her baby brother, who she carried slung in a shawl on her back.

We sat outside a dim classroom with a cement floor and a tin roof, filled with rows of scratched up desks. The teachers, a pair of shy women barely out of high school, stared at me.

I was 16, in a very remote, very poor Guatemalan village. I’d come as a volunteer with a group from my high school. Before that my travel experiences were limited to sunbathing at Hilton Head or waiting in line for roller coasters at Six Flags.

Most of those nights I didn’t sleep, unaccustomed to the sounds–dogfights, honking buses, and roosters. I’d wake to morning mist rising over coffee fields and men hunched under towering loads of sticks trudging up the mountains. We washed dishes in the community pila beside women balancing jars of water on their heads.

A week earlier we’d stepped out of the airport into Guatemala City. Our hosts, a Canadian missionary couple, warned us of rampant carjackings and muggings (their housekeeper had experienced the former just that week), pointing out the broken glass and barbed wire atop the walls guarding the houses. 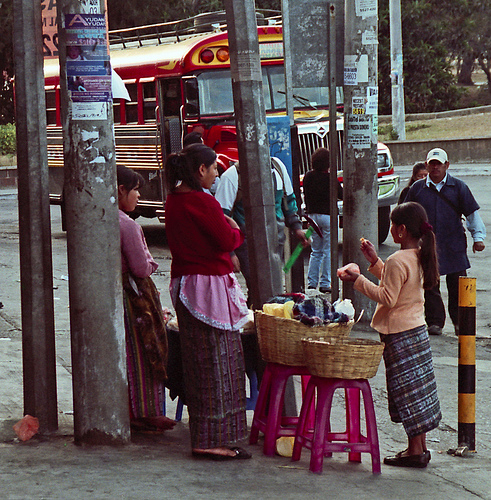 They advised us to avoid the mostly teenaged, machine-gun-toting police force that guarded nearly every public building, including churches.

When we arrived to the tiny village in the Chimaltenango province, they reminded us not to use the flea-infested blankets provided in the hospedaje and to check our shoes for scorpions in the morning.

We ate the same beans all week, watching them evolve into a new form each day until finally she pureed them and left them out to harden into bean loaf. The other volunteers gagged, but I ate every bite, throwing away my yearlong dedication to vegetarianism.

My adaptation to our circumstances surprised the group – they’d only known me as the shy, studious cheerleader who showed up for class in heels. But I found living without a mirror liberating, ignoring the stench and grime. How could I complain when the tireless elementary students insisted on working along side of us?

When not piling rocks in buckets or stabbing makeshift hoes into the dirt with startling efficiency, the children played in the construction rubble of the new school site, clawing up mounds of dirt or see-sawing on a wooden plank they’d laid on a rock. A hazardous building site that would be blocked off by yellow caution tape in the U.S. served as their playground.

On our last afternoon, the principal, Jeremías, announced that the teachers had planned a special snack.

He led us to a circle of desks where they served us corn tortillas piled high with lettuce and beets and topped with a boiled egg.

The American high-schoolers grimaced. The adult leaders were at a loss after their constant preaching that consuming homemade food or produce washed with the parasitic local water would surely lead to miserable illness.

The missionaries “accidentally” spilled their delicacies on the grass. A girl rushed over to replenish their plates. The cooks surrounded us, staring, anxious for our approval. I, ignoring the others, began eating. How could I not?

That trip forced me to consider that while I slept in a carpeted, air-conditioned bedroom with a closet full of clothes and a stereo system, much of the world lived and died in one-room shacks with dirt floors and owned only two changes of clothing.

After sharing a glass bottle of Coke from a dusty corner tienda with a dirty faced little boy in a faded Batman T-shirt, no charter bus tour will ever satisfy me.

Tagged
Narrative Guatemala
What did you think of this story?
Meh
Good
Awesome

I can feel Guatemala calling me back

Conversations on war and migration in Quetzaltenango

Could you live on $1 per day? An interview with a man who tried

In the shadow of volcanoes: 18 images of Guatemala

This week is Semana Santa, one of the wold’s most vibrant religious festivals

Guatemala has the most colorful Easter traditions in the world