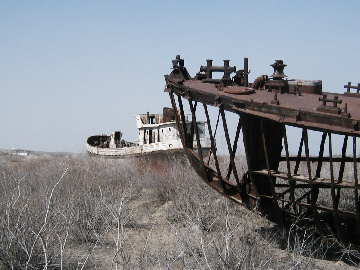 After the Soviet Union diverted its water for growing cotton, the Aral Sea dried up, leaving the town of Moynak a kind of skeleton. Stephen Bugno notes how it is to travel there.

Moynak is a depressing place. There’s no other way to say it and no reason to hide it. Everyone knows what has happened to this once well-off community.

Moynak used to lie on the southern shores of the Soviet Union’s great Aral Sea, today part of Uzbekistan. Since 1960, the sea has shrunk to 10% of its original size and is now nearly 100 kilometers from Moynak. The town’s once thriving fishing industry is entirely shot.

The local climate, once kept stable by the sea, has grown hotter and drier in the summer and colder in the winter. Now winds pick up residue from salt, pesticides, and fertilizer from the dry seabed that surrounds the town, contributing to the severe decline of the local population’s health.

Once in Moynak, our driver dodged herds of bony cattle most of the way through town, taking us to the WWII memorial up on a hill.

“The water used to come up to the bottom here,” our driver commented. “Now you can’t even see it.” 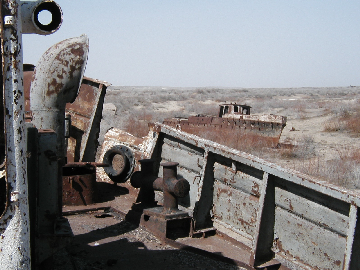 Just then a local with a war tattoo and sun-darkened skin approached me with a limp.

“Why did you come here?” he asked me accusatorily. I fidgeted trying to come up with an answer that wouldn’t offend him.

Why did I come here? Perched on this cliff, overlooking what used to be the Aral Sea, in one of the most remote places in Central Asia. What was I doing here? I knew I couldn’t tell him the truth. I came to see one of the biggest environmental and ecological disasters that the earth has ever seen—the destruction of the once fourth-largest inland sea.

But he knows why I came. He knows his livelihood and that of almost everyone else in his once prosperous town has been taken, unjustly destroyed by the previous government’s mismanagement of natural resources.

“You’re young now…you don’t really understand the concept of history.” he continued in accented Russian, “Thirty years ago when you came to this monument you could see the water.” His squinting eyes and wrinkled face radiated seriousness and frustration. 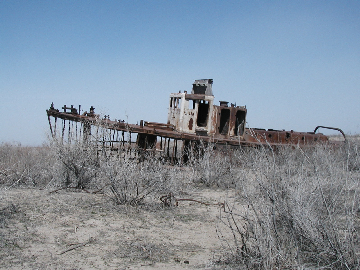 So we looked out with somber expressions—the barren desert speckled with few waning shrubs and rusting ship skeletons far in the distance.

We left the monument preserving the memory of these local soldiers and drove across the sea bed to get a closer look at the ship graveyard. These decaying vessels, stripped of nearly all usable scrap metal, haven’t seen water in years. We climbed over them as if we were children at a playground.

It was hard for me to justify why I had come to visit these people’s misfortune as a tourist attraction. An awkward feeling weighed me down the whole day. But I validated my trip hoping that educating the outside world would perhaps bring attention and thus aid their cause.

On the way out of town, we stopped at the museum, which contained many remnants of what once made Moynak proud—fishnets, a boat, preserved fish, and a photo album of the old fish cannery. We moseyed through the gallery. On the walls, children’s artwork depicted the rusty skeletons.

Tagged
Narrative Uzbekistan
What did you think of this story?
Meh
Good
Awesome

May 2, 2011 Stephen Lioy
✖
travelstoke
Download the mobile app
stoked by