A TRAILING SPOUSE is a person who follows his or her life partner to another location because of work. The term was coined in a 1981 Wall Street Journal article, but I tend to think of it as the grown-up version of “Follow the Leader.”

Following my wife around the world is like a job. The problem is that it’s not an actual job. The hardest part is coming up with creative responses when people ask me why I don’t work. So, last February I decided to put an end to it. I set up a blog, which anyone can visit. It’s called The Flying Pork Knuckle. Its mission is this: To keep readers from twiddling their thumbs. Its slogan is “Feed Your Head.” We accept donations.

***
Growing up, I dreamed of one day becoming Papa Smurf. I wasn’t going to replace him when he retired. I was going to be him. My mother still reminds me of this. We were on the phone last week. “You wanted to be Papa Smurf. Remember that?” It was my most ambitious career goal, but then again, it’s the only one I can recall.

In November of 2005, I moved to Virginia to be a medical claims adjuster. A childhood friend named Franklin had gotten me in touch with the right people. My waking hours were devoted to people injured in and around motor vehicles. Almost every case had a police report. Terrible accidents came with photos.

I’d call the injured at home, or the hospital, or wherever they might have been. They’d tell me where it hurt, and I’d type it into a computer. My manager’s mantra was “Pay what we owe.” I tried to appease him by familiarizing myself with insurance policies, and keeping my feet off the desk. After nine hours of talking to people about pain, I’d hop into my car and speed home.

***
I was allotted four paid weeks of vacation per year. In May of 2006, I sunk a bag of weed to the bottom of a shampoo bottle and flew to Utah. When I landed in Salt Lake City, I rented a car and drove down to Canyonland National Park, a vast area of high desert. Before leaving, a coworker asked me where I was going for vacation.

A Vision Quest is a rite of passage in some Native American cultures. As a white American, I only adopted certain aspects of this ritual.

***
This is something I discovered after five days in the high desert of Utah:

The motive behind mankind’s quest for knowledge is “intellectual restlessness.” (My wife taught me the phrase enclosed in quotation marks. I am using it now to restore any credibility that may have been lost due to the drug reference.)

Experimenting with American geography brought me one step closer to being a world traveler, hence, a trailing spouse. Little did I know, the universe was preparing a serendipitous end to my career as a claims adjuster.

“What are you going to do, stay here and circle the Taco Bell drive-thru for the rest of your life?”

Takayo and I were only dating when she accepted a job in China. This was in June 2007. She was going to be a special needs teacher. She had a purpose. The inside of my head became noisy with possibilities. The voice of my Conscious said “This is a big step. Let’s consider our options.” So I did. Next to speak was my big hairy Ego. He had a different brand of logic. “What are you going to do, stay here and circle the Taco Bell drive-thru for the rest of your life?” Because he had the last word, I listened.

We were in Takayo’s apartment. I don’t remember the exact words, but I broached the topic of marriage like a man stepping out to the corner market. I’ll pick up a carton of milk. And while I’m at it, I’ll quit my job and move to China with you.

“Did you just propose to me?” 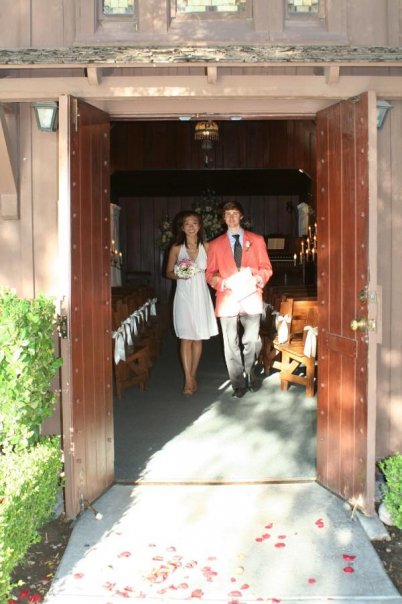 A week later, we mapped out the beginning of our new lives: Takayo would move to China in August, and I would stay behind and work.

In October, we would rendezvous in Vegas, get married, and fly back to our respective continents. “And I won’t tell anybody at work,” I added.

If all went to plan, by December I’d have the ring paid off and my car sold. In January, I would fly into China on a one-way ticket and hopefully get a resident visa. This became our Master Plan of Romance.

***
Takayo never asked me to follow her. In fact, she didn’t think I’d give up my American life. Her exact words were “I didn’t think you’d do it.” And it surprised me too. Imagine that? One day you’re in love, and the next thing you know, you’re getting married in Vegas and moving half-way around the world to a communist country.

***
Moving to Suzhou was exciting, but not working caused me to question my role as a man. In time, figuratively speaking, it killed my Ego. I imagine his tombstone. The epitaph reads:

HE QUIT HIS JOB TO BECOME A HOUSEWIFE

***
For my wife, cooking is as nebulous as quantum physics or the rules of cricket. My primary role as a stay-at-home spouse was buying and cooking food. I remember my first pilgrimage to the neighborhood wet market. The fruit and veggie stalls were in front. Women in canvas smocks with arm coveralls ran them. I bought bananas from the youngest, most attractive saleswoman. She tried to teach me how to count with my hands, and laughed at my ineptitude. I converted Chinese Yuan to US Dollars in my head.

Beside the chicken cages was a tiled room filled with aquariums. They contained turtles, toads, fish, crawfish, and ribbon-shaped fish that I had never seen before. Folks pointed to the animals in this doomed pet shop and walked away with plastic bags that quivered from within. The neighborhood butcher wore boilersuit gloves while arranging pig organs on a wooden table.

***
Like so many housewives, I looked for creative ways to pass the time. The cold, rainy weather in Suzhou kept me inside a lot, so I revisited the classics I neglected to read in high school, wrote to friends back home and learned how to use a wok.

An idea came to me one morning while watching CNN. I’ve got it! I’ll write a novel. This eureka! moment took over with the urgency of an infomercial. I got off the couch and went straight to work on an outline.

My thesis: People are not as interesting as me and they don’t have any balls

My plan: Tell all, send it to an agent, and watch the money pile up.

I went out and bought some Tibetan incense and a silk scarf to wear for inspiration. Here is an excerpt:

it’s healthy for our brain to see and comprehend gruesome images like unsuspecting saps getting their eye’s stabbed out by a harpoon-wielding sardine fisherman just before being skull-fucked blind on a boat during a hurricane and thrown into the angry sea.

By the time I ran out of incense, I had a 50 page screed on my hands, and a lot of housework to catch up on. I was going to edit, but a trip to the bathroom spawned a six-hour cleaning jag. It was a dreary morning, but I wore yellow gloves to scrub the surfaces in one room and then another. I found a groove. Self-worth = Spotless toilet. When I was finished, I stood in the doorway and admired my work. I accomplished something.

And I received positive feedback from Takayo too. “Ooh, clean,” she said before closing the door and flushing a day’s work down the drain.

***
April 2008: I applied for a job teaching Business English. Both sides were optimistic: They wanted someone with a college degree, and my schedule was wide open. The hotel was still under construction when I arrived for the interview. The staff was working in an underground bunker until the 700-room mega hotel was completed. A Suzhou native named Nina would lead the interview. She was professional, but hip, dropping some slang as I followed her down the hallway.

“I understand you enjoy golf? That’s cool!” We came to a steel door. When she opened it, twenty heads turned our way. These were the future housekeepers. They sat quietly in their desks, each wearing identical mint jumpsuits. “You have twenty minutes to teach the class,” Nina said, and took a seat in the back.

“Nee how,” I said. No one answered. “Can anyone say ‘hello?’” Silence. I looked around the room. White walls. No windows. When a young man coughed, I turned to him abruptly. We locked eyes. “Can you count to three in English?” I blurted out. His face lost color. The other students looked to the floor. It wasn’t my intention to spook him, so I started counting, basically out of guilt. “One…two…”

He looked at me as if I had asked him to French-kiss a pug. I moved on. There were other folks with respiratory ailments to pick on.

I counted to three in Mandarin. “Yi, er, san.” Eventually, they began to open up. As it turned out, they could count to infinity in English.

“And what is this,” I asked, pointing to another number on the whiteboard.

“Five hundred eighty-seven thousand six hundred twenty-nine,” they mumbled in unison. This took fifteen minutes. Realizing that I hadn’t taught them anything, I spent the remainder of class preaching to them like an alien from the not-so-distant future.

Nina called me the next day and gave me a line I once heard from a disgruntled girlfriend. “Can we still be friends?” I was sitting on my couch, reading between the lines. “Sure, Nina,” I said. Her choice of words saved face. It reminded me of a quote I heard in a documentary:

The Chinese strive for harmony similar to the way Americans idealize freedom.

Guys Night was my lifeline to male bonding. It took place twice a month in the dining room of a pizzeria on Shin Do Street, the foreigner district. The owners were a middle-aged couple who owned several Western-style restaurants in the area. They didn’t mind if we gambled or smoked in their establishment. Our beer tab was staggering. We were from the US, Canada, England, New Zealand, and Australia.

I secretly kept notes. Friends have been replaced with So-and-so.

My wife gave me money to drink and gamble with. This was no secret. The other players would say things like, “How much is your allowance?” And I’d look to my chips and say, “It’s doubled since your wife chipped in.”

We’d laugh, and then get back to drinking and trying to bankrupt each other.