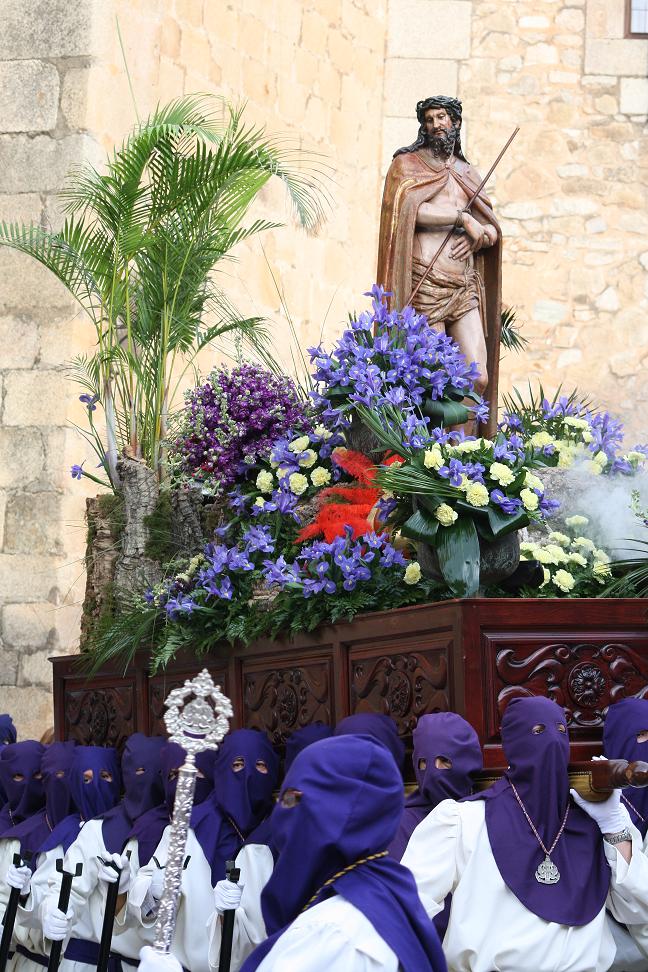 REVERBERATING from around the corner, drumbeats become people and people become a procession.

Incense hangs down the adarve, the parapet into which wave after wave of people are crowding.

Less than 10 feet of space from wall to wall, close enough to concentrate the eye-stinging smoke, close enough to realize that there are only two ways out, and both would mean climbing over hundreds.

An uncomfortable and lasting claustrophobic moment until a snare drum ricochets around the corner, burying the closed in feeling and replacing it with a undefined musical memory.

Vague until a pinched minor trumpet note floats along with the haze…it’s Miles Davis.

The oriental sounding blues gives birth to Sketches of Spain. The ghosts of Miles and Gil Evans are suddenly added to those reborn here in Caceres every Easter.

Out of the clear sky, a tortured Christ hangs off a large silver crucifix held high, reflecting warm spring sunshine onto the upturned faces of those around who like me are pinned to the ramparts.

A procession is not only something to see, but a place to be seen.

A procession is not only something to see, but a place to be seen. Impeccably dressed women deftly manage the cobblestones on five inch heels.

Their husbands, sober and almost boring in comparison, look as though they have stepped out of 1980’s Ralph Lauren ads, all corduroy and deck shoes with pink or baby blue sweaters hanging off their shoulders. Impossibly dolled up girls in pastel topcoats look like colorized wartime photographs.

Any other week of the year, Spanish churches are the exclusive haunt of the retired and the about-to-be-wed, but Semana Santa seems to bring people into the streets.

Pasíon in Spanish, passion in English. Similar enough sounding words, but ones that carry very different meanings for non-theological ears who have gladly forgotten Mel Gibson’s gory film. Etymologically, both words have their root in the verb to suffer. Dominatrices and their clients aside, few English speakers would find something in common with the root and today’s usage of the word.

What was once a visual display of biblical stories for the illiterate and non-latin speaking masses has turned into one of the most difficult weeks of the year to find a hotel that isn’t full. The wealthy no longer pay the poor to carry the images for them and the poor no longer participate as solely muscle. 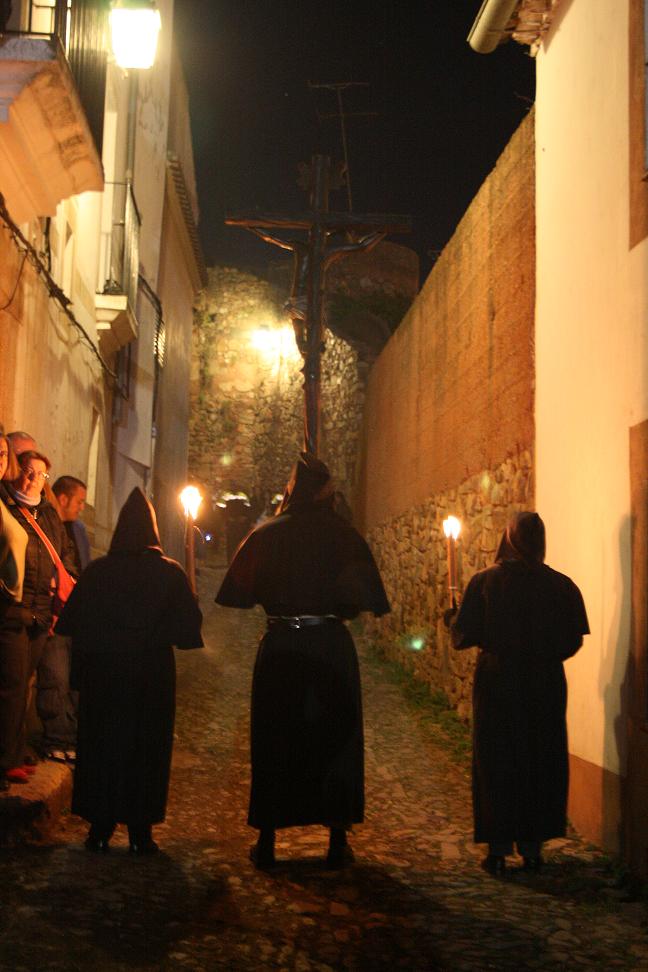 The moving bible scenes are on top of everything popular, in the true sense of the world, for the people and enjoyed by them.

Even back in the heady anticlerical times of the Republic, before the horrors of the Spanish Civil War, processions continued to be celebrated.

One year the government banned them, and another the church did the same, but each time the people took it upon themselves to give the images their spring airing.

A break now in the train of people. A chain coolly rattles along the uneven stones. A lone man walks barefoot, dragging a heavy cross hooked over his shoulder.

The clinking draws my attention away from his unhooded head to his feet. The attached chains bring to mind the tapas bar habit that some Spaniards have of blithely ignoring even the closest garbage bin.

A leap of faith, or inherent trust that the toothpicks and broken glass won’t find their feet?

In either case, as the candles move on and the onlookers stream away, the street cleaners silently emerge to do their angel’s work.