The McDonald’s near my house built a small step-up viewing station for kids to watch their McPizzas being made behind the counter, where someone wearing a visor unwrapped dough from a plastic wrapper and spread a few dollops of sauce around the surface with the bottom of a metal ladle. Cheese, pepperoni, oven.

I’d then return to our table where others, having ordered burgers or nuggets, might have already started feasting. But my small numbered table-marker indicated better things to come. In a few minutes, someone would be delivering me that pizza I’d watched as if it were my own child, incubating behind glass at a hospital.

Somewhere in the back of my mind I always knew that Evansville’s relationship with restaurant corporations was significant. That assumption was fully validated when they began constructing the McDiner, a fast-food-sit-down McDonald’s hybrid where you could order traditional McFare at the counter or sit at one of the booths, where a novella of choices from country fried steak to McLoaf were available to order through a tableside red plastic telephone. The newspaper wrote of Evansville’s prominent status as a test-market for fast food restaurants due to its geographic isolation and proximity to an interstate, and the honor that the McDonald’s regional manager felt for being able to open the nation’s first McDonald’s of this kind.

The concept only lasted for a couple months. I never tried one of the new items, but I did watch a friend of mine slather ketchup on the backside of one of the telephones, which we assumed would be picked up by an unsuspecting customer.

Evansville cannot be rivaled when it comes to premium suburban dining options. Driving down Green River Road, a fast food skyline leans powerfully over the passenger seat: BurgerkingTacobellArby’sRally’sHardeesLongjohnsilver’sMcDonald’s, a pantheon of illuminated logos overseeing the parking lots and access roads below. Further out on the East Side of town, there are a few stretches of new development that I haven’t even seen yet. Word has it they opened a Five Guys.

Sometimes, after football practice, a bunch of us would go to the new CiCi’s Pizza that opened on the West Side. It was $3.99 for an all-you-can-eat buffet. A soft drink cost a dollar extra. We always got water.

One time I saw my grandparents there. I thought it was unusual, because they rarely go out to eat. My grandpa grows his own vegetable garden and kept a working farm for decades. They said this was a special occasion.

Corn on the Cob

I was talking to my girlfriend on the phone. She’s from Philadelphia. She asked what I had for dinner. Corn on the cob, I said. She asked what else. I didn’t know what to say. We all had about four cobs of corn, nothing else. 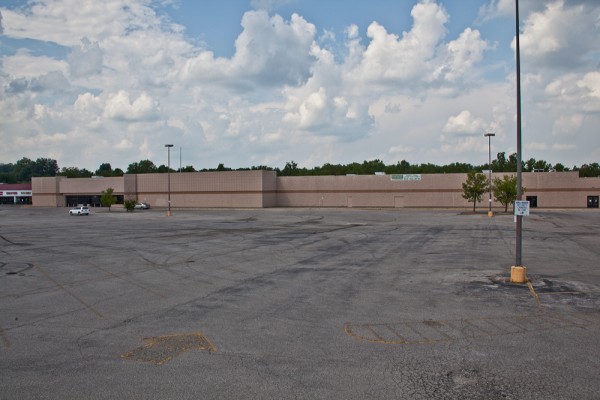 The old West Side Wal-Mart. Photo by Dustin Scheller.

There’s an empty Wal-Mart that went out of business so that a Super Wal-Mart could be built a mile down the road. Once the 115,000 square foot building went dark, its parking lot became the go-to spot for us on the weekend, a concrete park for our trucks before and between parties out in the farmlands or on nights when nothing was really happening. We’d previously parked outside the Taco Chicken (TacoBell-KFC combo) across the highway, but here, we had more room, less traffic.

Now, more than 8 years later, the old Wal-Mart remains dark, the vast parking lot still a high school rendezvous point and where probably every west-sider under the age of 22 learned to drive. Though it’s entirely deserted, idling teens still park their cars neatly between the fading yellow lines while waiting for a friend.

A chain of classic diner-themed fast food restaurants. Burgers from here come out nearly paper-thin, and the shoestring fries must be eaten by the handful. They make “The World’s Greatest Peanut Butter and Jelly Sandwich.” It’s smothered in chunky peanut butter, strawberry jam, and topped with bits of real strawberries and peanut butter sprinkles. It costs more than a double cheeseburger.

As you exit the drive through, you’ll pass a small white sign that reads: “Voted America’s Best Chocolate Ice Cream.” That’s all it says. The sign has been there since I can remember.

Every Tuesday my high school’s cafeteria served pizza and mashed potatoes. The pizza was a wide, thin rectangle, with small bits of pepperoni that seemed a little too pink for their own good. The mashed potatoes sweated butter. On their own, they were both pretty terrible.

However, any student who’d been there at least two weeks learned that spreading the mashed potatoes on top of the pizza somehow resulted in a pretty decent eating experience, or at least one that stopped the hunger. Lunch times varied from around 10:50 to 12:30.

There is no grocery store in downtown Evansville.

If you’re taking a girl on a date, wining and dining a client, or looking for a place to grab a post-work martini, you will go to the Bonefish Grill, or you will regret that your evening didn’t live up to its potential. While there are a few other nice restaurants in town (Olive Garden, Biaggi’s, The Haub House), nothing beats the polished casual ambience of the Bonefish Grill.

Like most of the good restaurants in the city, it’s on the East Side and situated in a business ‘pavillion’ that involves more than one series of turn arrows and moments where you’ll be required to proceed through the intersection. It faces the highway, and sits to the left of what used to be a Borders. You can tell it used to be a Borders, because the makeshift “Halloween Central” store banner doesn’t completely cover the original signage. 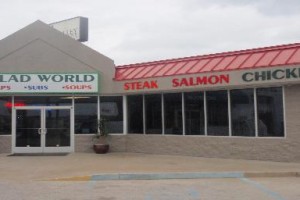 A friend of mine from high school opened this restaurant called Salad World with his brother a few years ago. Despite its name, the words STEAK, SALMON, and CHICKEN are written prominently on the storefront.

It’s operating out of what used to be a gas station convenience store. The gas station isn’t there any more, but the auto repair shop, adjacent to what is now Salad World, is still busy as ever.

They just opened a Fresh Market on the East Side. My friend’s mom came back so jazzed about it because they had freshly made pretzel bread. You can’t buy that at most other grocery stores.

I went to the Fresh Market when it first opened. It was packed full of shoppers pushing two-tiered shopping carts around kiosks of produce, the names of the items all on identical chalkboards. The write-up in the paper said that the stores were modeled after the open-air markets in Europe. It was much larger than any European grocery store I’ve ever been in, and no one seemed to have any idea where they were going.

If you’ve never eaten Grippo’s Barbeque Potato Chips, there’s a good chance you’ll die regretting it. They’re apparently made in Cincinnati, but I’ve only ever seen them sold around Evansville. The taste is a perfect combination of barbequed sweetness and peppery cayenne. The texture is extremely unique: crunchy but slightly soft, as if it could dissolve in your mouth. It may or may not have something to do with the two grams of trans fat per serving.

They’re found in various sizes: small, plastic bags, loud to the touch; ‘Twin Packs’, which are one very large, colored bag containing two separate, unmarked, shiny silver bags; and very large single bags. However, the most commonly found version of Grippo’s is the pound-and-a-half box. It’s just a big cardboard box about the size of a microwave with a clear plastic bag full of chips inside. Basically, the kind of chips Caligula would have asked for. 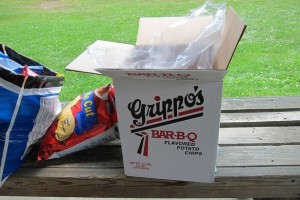 A box of Grippo's. Standard.

Around Evansville, a box of Grippo’s is a staple of any poker night/graduation party/wedding reception/birthday/midnight snack. During college, I’d bring a couple boxes down, and everyone would go nuts. People didn’t know how to eat them, though. You see, boxed Grippo’s are coated in the heaviest amounts of seasoning (which you can buy separately), which wreaks untold havoc on the throat and stomach. Waking up in the morning after a drunken Grippo binge feels a lot like having vomited in your sleep.

In 2011, Evansville was named the most obese city in the United States of America.

To me, Evansville’s problem as the epicenter of American Fat Culture is that you can’t go anywhere and just get like a ‘fresh meal.’ You have to go to a chain restaurant. You could argue that no, the problem is uninformed health choices, people drinking too much soda, too many low-cost options for the lower-middle class that makes up most of the city. But I think it really comes down to the fact that on my way home from school I passed by four grocery stores and more than twenty fast food restaurants, and I’m supposed to live on the ‘rural’ side of town.