View all travel news
Top Destinations
Top CitiesView All Destinations
Trending Regions
Trending Cities
Load More
On his second visit to the Jaipur Literature Festival, Jonathan Yevin gets ground level notes including Orhan Pamuk on the ‘ugliness’ of culture in his novels, Jon Lee Anderson on Che Guevara, and Junot Diaz on writers learning to endure their ‘wackness’. 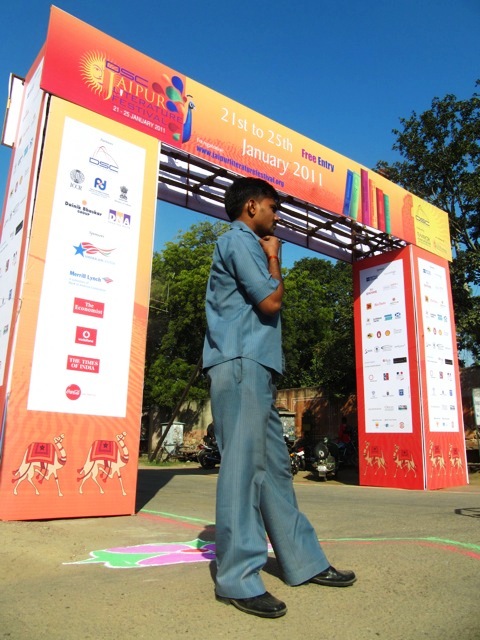 It’s the largest free lit-festival in the world, the largest in its hemisphere. The organizers don’t take themselves too seriously. Everyone is there to have a lot of fun. At night, authors must shut up and yield the floor to live Rajasthani music and folk dancing. It seems every moment there is something interesting going on.

Bibliomania officially kicked off at 10am when “his excellency the chief minister of Rajasthan” lit the ceremonial torch (and then hightailed out of there to address a “state crisis”) under a huge canvas shade structure on the front lawn of the old haveli Diggi Palace.

This was followed by a litany of speeches celebrating classical literature, mostly of the Indian variety. Indologist Sheldon Pollock claimed somewhat redundantly, “It’s not a good thing to let the classical past just pass away.” No shit, Sheldon.

Besides the front lawn the Palace features three other stages scattered Clue-like around its grounds. These four venues offer simultaneous programming, which at seven hour-long slots daily times five days, equals the sort of cognitive stimulation one can only get by loading one’s browser with Ted Talks and staying glued to the screen til dinner. Even the most able multitaskers (ahem) are overwhelmed by the sheer futility of trying to absorb everything. Dashing between them to get a thorough cross-section over the course of the first day proved a bit like trying to solve several Rubik’s Cubes at once.

Orhan Pamuk took center stage with an answer for Sheldon: “We have to be radically experimental in search of the past. A lot of the culture of writing is about saying ‘what a beautiful thing.’ My novels are not like that. In fact they’re about saying ‘how ugly’ in a way.” During the Q&A session, an Indian asked if the theme of his new novel Museum of Innocence is whether philosophical love is deeper than physical love. Without skipping a beat Pamuk responded, “That depends on the penetration.” Zing!

On a few bean bags off to the side I found the Dominican-New Jerseyite Pulitzer Prize-winner Junot Diaz surrounded by beautiful women, telling them he wanted to have a baby with Padma Laxshmi. Unfortunately the Top Chef hostess spurned his offer. “She’s afraid it might come out black.”

I retreated to the British Council Reading Room, with bookshelves exclusively featuring the work of English authors. On a few bean bags off to the side I found the Dominican-New Jerseyite Pulitzer Prize-winner Junot Diaz surrounded by beautiful women, telling them he wanted to have a baby with Padma Laxshmi. Unfortunately the Top Chef hostess spurned his offer. “She’s afraid it might come out black.”

I introduced myself, and we chatted for a while. I was curious to hear his take on the recent somewhat inexplicable return of Baby Doc to Haiti.”It just shows how sordid are the highest echelons of society there. If you’ve done good, you should fear for your life. But if you’ve done unspeakable evil, you’re the safest people in the country.”

Later on I caught the tale end of New Yorker regular contributor Jon Lee Anderson’s talk on his encyclopedic biography of Che Guevara. In his more recent work covering America’s wars, he has more than once found a photo of the iconic Argentine revolutionary in the wallets of killed Islamist insurgents. “In a sense he’s become a spiritual figure. He went amongst the poor, was allowed to be killed, was misunderstood. People keep faith in his memory. Part of it has to do with the period he lived: the beginning of TV. He was photographed even in death. It calls to mind classical paintings of Jesus. Che’s life was defined by his death.” 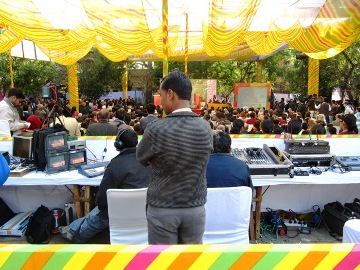 After the talk, I hung around to extract more Che-related minutiae. “Even his enemies respected him. I interviewed the CIA agent who ordered his execution. He told me that as he walked away from Che’s corpse he felt for the first time in his life a sort of asthma. Is that Catholic penitential guilt or what?” Revolutionary esoterica was in full reveal when an indignant publicist-capitalist intervened to march Anderson to a book signing, leaving me and Time correspondent John Krich in the lurch. “Che was an incorruptible person,” Krich told me. “When his kid was sick, he wouldn’t even allow his wife to drive the boy to the hospital. That gas belongs to the people of Cuba. So they took the bus like everyone else.”

After a thoroughly filling Indocentric smorgasbord lunch, the talks continued. Continuing the Red threat thread, Krich and I ducked into “Mao: The Unknown Story” by the husband and wife team of Jon Halliday and Jung Chang. Having lived through the entire epoch, Chang offered colorful anecdotes of proletariat life during this period–when for the first time in Chinese history women were famously ordered to get involved in physical labor. “The more books you read the stupider you get, Mao claimed. So I became an electrician without training. Five shocks in my first month.”

Their book Wild Swans, which she and Halliday took 12 years to research and write, testifies to the utter lack of respect for the sanctity of life espoused by the Chinese leader. The couple attributed over 70 million deaths to the man, mostly through policies of intentional starvation of the peasantry, in favor of trading grains to Russia for military equipment and nuclear armaments. “My father and grandfather died in the Cultural Revolution. I knew Mao was bad. I didn’t know he was this bad.” To this day, the official Communist Party line is that Mao was 30% wrong and 70% correct.

Krich, who lived many years in China, sat next to me offering insightful footnotes along the way. He advised I supplement a reading of Wild Swans with the book penned by Mao’s doctor, who claimed Mao never once bathed or brushed his teeth in 27 years (but did exhibit a robust propensity for young girls). “The Chinese communists had all the historians fooled. They were wined and dined and never saw the starvation. But all they had to do was go to any Chinatown in the world to see people lined up to mail food to their relatives. With the internet that will never happen again.” We can only hope.

My first day of litfest seminars culminated with Diaz’s highly off-the-cuff conversation entitled “storyteller-in-chief” to a packed crowd under the mughal tent. “I can’t imagine anything more foreign to Indian readers than the Dominican Republic or New Jersey. But white people were looking for you when they found us.”

This segued neatly into a side-by-side of Caribbean island life compared with the American dream.

“You start growing up and meeting mirrors of yourself. It’s extraordinary how little you know about yourself until you see yourself in other people. I learned from Vietnam vets, civil rights movement burnouts, dropouts who became hippies. Society wants us to seek approval, so there isn’t much space to be an artist. It’s the artist’s job to disrupt the economy of approval so many of us have grown up in. We know that we need less applause, more conversation. We need to fight the approval every day.”

Diaz’s advice for writers: “The good stuff comes out around the 25th revision. You must learn to endure your wackness. You discover you’re a good artist when everything goes wrong, but you still hang in there. I’m already completely and utterly lost. Why not keep going? That’s when you discover your strength. You are driven by the ultimate faith-based initiative, the hope that your words will encounter someone in the future who will need them.”

Tagged
Narrative India
What did you think of this story?
Meh
Good
Awesome

Gurus, Gods & Camels: Notes From Inside the Images