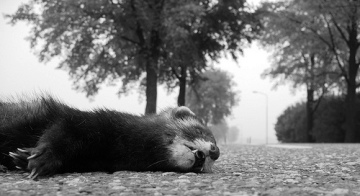 THERE WAS BADGER. Dead on a South Dakota two-lane. Beautiful beyond death. Scarlet blood. Fur the rich browns and grays of autumn.

I pulled off the highway, parked the truck and moved the badger away from the killing ground, into the winter-gold grass. His feet were huge, tough black pads, long claws for digging and defense.

I turned him on his belly, his throat against the earth, the shape of his last cry no longer visible. He might have been sleeping on the dark earth. I pointed his snout East as I had been taught. I had no corn pollen, no tobacco. I forgot I had a bottle of rain and snow melt from the great basalt throat some call Devil’s Tower, some call Bear Lodge. I would have to send him on his way un-anointed.

I looked down at him. I had not touched his body with my hands, had moved him with a shovel. I thought of fleas, a dozen plagues only a little less deadly than trucks and cars. There was that bright black stripe of fur flowing from his head down his spine, the other fur the color of oak leaves and twilight.

Through all of this, no car nor truck drove past us. We were together in perfect silence.

I crouched and set my palm on his big head. I ran my hand down his spine. His fur was thick, less coarse than I had imagined. I told him I was sorry, not just that my kind had killed him, but that I had almost held back my touch. Through all of this, no car nor truck drove past us. We were together in perfect silence. I looked South, then West, in the direction of my home. “Goodbye,” I said, “I need to go.”

I climbed back into the truck, carrying his scent on my hand. It was musky, of digging and dirt and the stink of terror and death. I washed my hands with Bear Lodge water, dried them on my old flannel shirt, pointed the truck West and left him, silent and still in the frosted grass.

I still carry him with me. I remember Badger in a book by Barry Lopez:

“I would ask you to remember this,” said Badger. “The stories people tell have a way of taking care of them. If stories come to you, care for them. And learn to give them away where they are needed. Sometimes a person needs a story more than food to stay alive. That is why we put those stories in each other’s memory. This is how people care for themselves.”

What did you think of this article?
Meh
Good
Awesome
Bookmark
Posted In
Narrative
Destinations
South Dakota, United States